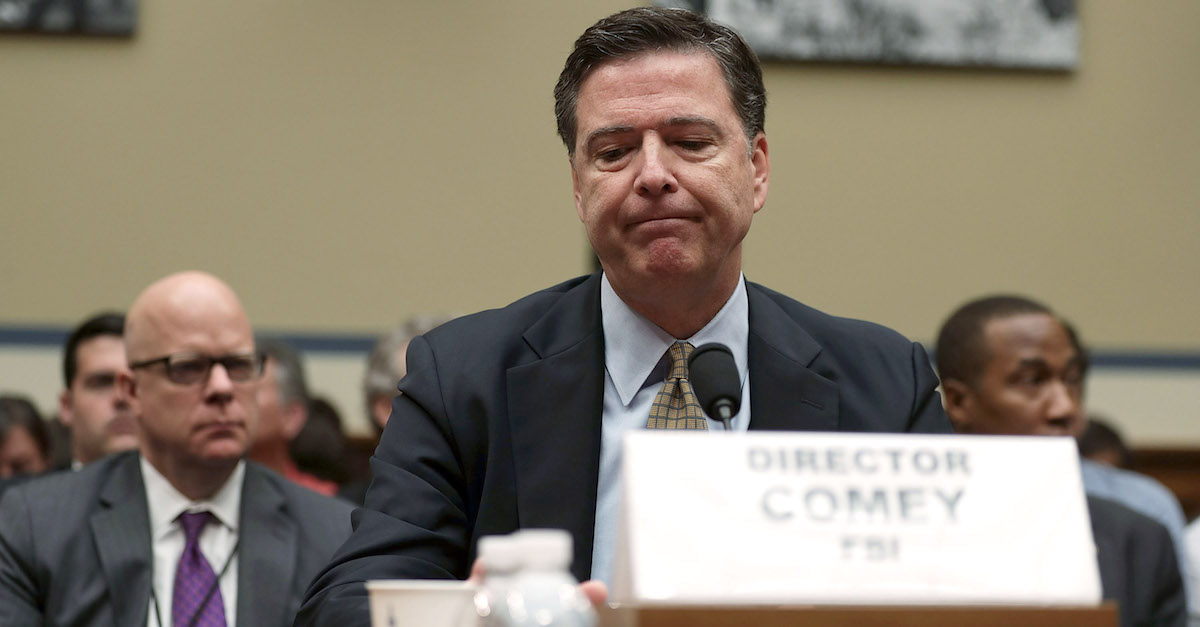 Fired FBI Director James Comey violated his FBI employment agreement, and Department of Justice and FBI policy through the “retention, handling, and dissemination of certain Memos,” the DOJ’s Office of Inspector General (OIG) said Thursday. This was the culmination of an investigation into Comey’s keeping and dissemination of memos of his meetings with President Donald Trump two years ago.

The OIG was quick to explain what DOJ and FBI policies say about record removal:

Department policy states that employees may not, without agency permission, remove records from the Department—either during or after employment. Under Department policy, the only items that departing employees may remove without prior approval are personal information or documents that are unrelated to the Department and official business; copies of any unclassified information already officially in the public domain; and copies of the employee’s email contacts. A departing employee must make a written request, receive approval from the appropriate official, and execute a nondisclosure agreement before removing any records or information. Before authorizing any such request, the approving official must ensure that the requested documents do not contain any prohibited categories of information, such as classified information. According to Department policy, if the head of a Department Component—for example, the FBI Director—seeks to remove Department information, he must receive approval from the Assistant Attorney General for Administration.

The FBI policies are no different. When FBI employees separate from the FBI, they are required to “surrender all materials in their possession that contain FBI information.” Every employee signs an FBI Employment Agreement at the beginning of their employment acknowledging this requirement. According to one Section Chief of the FBI’s Records Management Division (RMD), this requirement covers “all [FBI] information,…whether it’s a record or not, created or gotten by access or acquired during the course of their employment…, [it] is property of the U.S. government….”

The OIG shamed Comey for setting a “dangerous example” by seeking to “achieve a personally desired outcome.”

DOJ IG "found no evidence that Comey or his attorneys released any of the classified information contained in any of the memos to members of the media." I don’t need a public apology from those who defamed me, but a quick message with a “sorry we lied about you” would be nice.

And to all those who’ve spent two years talking about me “going to jail” or being a “liar and a leaker”—ask yourselves why you still trust people who gave you bad info for so long, including the president.

DOJ IG ‘found no evidence that Comey or his attorneys released any of the classified information contained in any of the memos to members of the media.’ I don’t need a public apology from those who defamed me, but a quick message with a ‘sorry we lied about you’ would be nice. And to all those who’ve spent two years talking about me ‘going to jail’ or being a ‘liar and a leaker’—ask yourselves why you still trust people who gave you bad info for so long, including the president.

According to the OIG, after Comey was fired, Comey “violated applicable policies and his Employment Agreement by failing to either surrender his copies of Memos 2, 4, 6, and 7 to the FBI or seek authorization to retain them; by releasing official FBI information and records to third parties without authorization; and by failing to immediately alert the FBI about his disclosures to his personal attorneys once he became aware in June 2017 that Memo 2 contained six words (four of which were names of foreign countries mentioned by the President) that the FBI had determined were classified at the ‘CONFIDENTIAL’ level.”

While Comey apparently viewed the memos 2-7 to be his and “like [his] diary,” OIG said Comey’s “characterization of the Memos as personal records finds no support in the law and is wholly incompatible with the plain language of the statutes, regulations, and policies defining Federal records, and the terms of Comey’s FBI Employment Agreement.”

OIG concluded that Comey “failed to live up” to the responsibility of law enforcement to protect sensitive information:

The responsibility to protect sensitive law enforcement information falls in large part to the employees of the FBI who have access to it through their daily duties. On occasion, some of these employees may disagree with decisions by prosecutors, judges, or higher ranking FBI and Department officials about the actions to take or not take in criminal and counterintelligence matters. They may even, in some situations, distrust the legitimacy of those supervisory, prosecutorial, or judicial decisions. But even when these employees believe that their most strongly-held personal convictions might be served by an unauthorized disclosure, the FBI depends on them not to disclose sensitive information. Former Director Comey failed to live up to this responsibility. By not safeguarding sensitive information obtained during the course of his FBI employment, and by using it to create public pressure for official action, Comey set a dangerous example for the over 35,000 current FBI employees—and the many thousands more former FBI employees—who similarly have access to or knowledge of non-public information.

Nor did OIG forget to mention that Comey was “previously faulted […] for acting unilaterally and inconsistent with Department policy.”

“Comey’s unauthorized disclosure of sensitive law enforcement information about the Flynn investigation merits similar criticism. In a country built on the rule of law, it is of utmost importance that all FBI employees adhere to Department and FBI policies, particularly when confronted by what appear to be extraordinary circumstances or compelling personal convictions,” OIG said. “Comey had several other lawful options available to him to advocate for the appointment of a Special Counsel, which he told us was his goal in making the disclosure. What was not permitted was the unauthorized disclosure of sensitive investigative information, obtained during the course of FBI employment, in order to achieve a personally desired outcome.”

Fired FBI Deputy Director Andrew McCabe, then Acting FBI Director, referred the matter to the OIG in July 2017. Comey wasn’t and will not be charged.