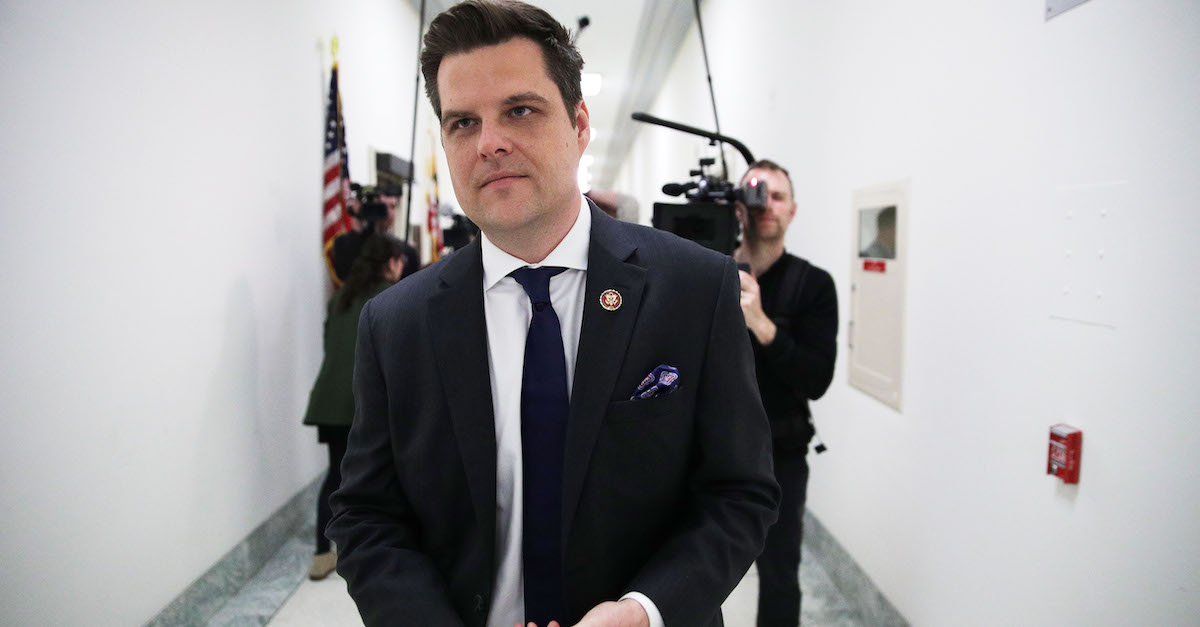 The sex-trafficking investigation of Florida Rep. Matt Gaetz began when Attorney General Bill Barr led the Department of Justice, but that did not stop the pro-Donald Trump Republican from pointing the finger at Attorney General Merrick Garland.

The three-term congressman is currently under investigation by the Department of Justice over allegations that he had a sexual relationship with a 17-year-old and paid for her to travel with him, according to The New York Times’ original report based on sources briefed on the probe.

The congressman has denied the allegations and has leveled counter-allegations that he and his family are victims of an extortion plot, a response that Gaetz teased out on Fox News host Tucker Carlson‘s show last week just after the bombshell story broke.

Gaetz offered a different line of attack in a Monday opinion piece for the Washington Examiner titled: “The swamp is out to drown me with false charges, but I’m not giving up.”

In the piece, Gaetz broadly defends his past sexual lifestyle without delving into specifics—and notes that he previously defended former Democratic representative Katie Hill when she was caught up in her own sex-based ethics scandal involving a staffer and her ex-husband (which ultimately resulted in her resignation).

“My lifestyle of yesteryear may be different from how I live now, but it was not and is not illegal,” Gaetz wrote. “I defended Rep. Katie Hill’s ‘throuple’ when her own Democratic colleagues wouldn’t. I just didn’t think it was anyone’s business. It comes as no surprise that my political opponents want to sensationalize and criminalize my prior sex life just as I am getting engaged to the best person I’ve ever known.”

The embattled Republican’s invocation of his “political opponents,” however, does not track with the timeline of the ongoing federal investigation.

Gaetz writes in his op-ed:

My personal life is and always has been conducted on my own time and my own dime. Consensual adult relationships are not illegal. Although I’m sure some partisan crooks in [Attorney General] Merrick Garland’s Justice Department want to pervert the truth and the law to go after me, I will not be intimidated or extorted. The battle for America’s future demands gladiators, and I am going to keep getting back up and fighting, every single day.

But according to the Times report on the matter, two anonymous sources told the outlet that the investigation into Gaetz’s sexual behavior began under Barr, the man hand-picked by Trump to lead a more conservative and hard-charging DOJ following Jeff Sessions‘ ouster.

The investigation was opened in the final months of the Trump administration under Attorney General William P. Barr, the two people said. Given Mr. Gaetz’s national profile, senior Justice Department officials in Washington — including some appointed by Mr. Trump — were notified of the investigation, the people said.

Notably, Gaetz has previously allied himself closely with both Trump and Barr in innumerable television appearances and social media posts.

Comey calling AG Barr dishonorable is 100% about the fact that Barr is turning the tables and investigating the people who started, funded and advanced the failed coup attempt.

This is the real reason radical Dems are attacking him now. https://t.co/ZtjEJUBEMs

What AG Barr said was right. @realDonaldTrump was always frustrated in discussions w me that the #MuellerInvestigation was baselessly making it harder for America 2 lead the world.

Imagine beating 16 Republicans, the Clinton machine, the media, the establishment…and then this.

Gaetz’s broadside defense against his critics and the DOJ investigation does not acknowledge the reported beginnings of the sex trafficking inquiry—or mention Barr whatsoever. Instead, the outspoken and increasingly politically outcast Florida Republican repeats the suggestion that he is the target of a political persecution that was initiated by the Biden administration.

“The Biden Justice Department would rather investigate me for adult, consensual sex than Hunter Biden for his shady business dealings, than others for illegal leaks, or a former Justice Department official for the evident extortion of a congressman,” Gaetz wrote. “Go figure.”

The day after the DOJ’s investigation was first reported, Gaetz claimed the source of the extortion is former DOJ employee David McGee. The private law firm where McGee works said in a public statement that Gaetz’s allegations were false and defamatory.

Gaetz’s office did not immediately respond to a request for comment.