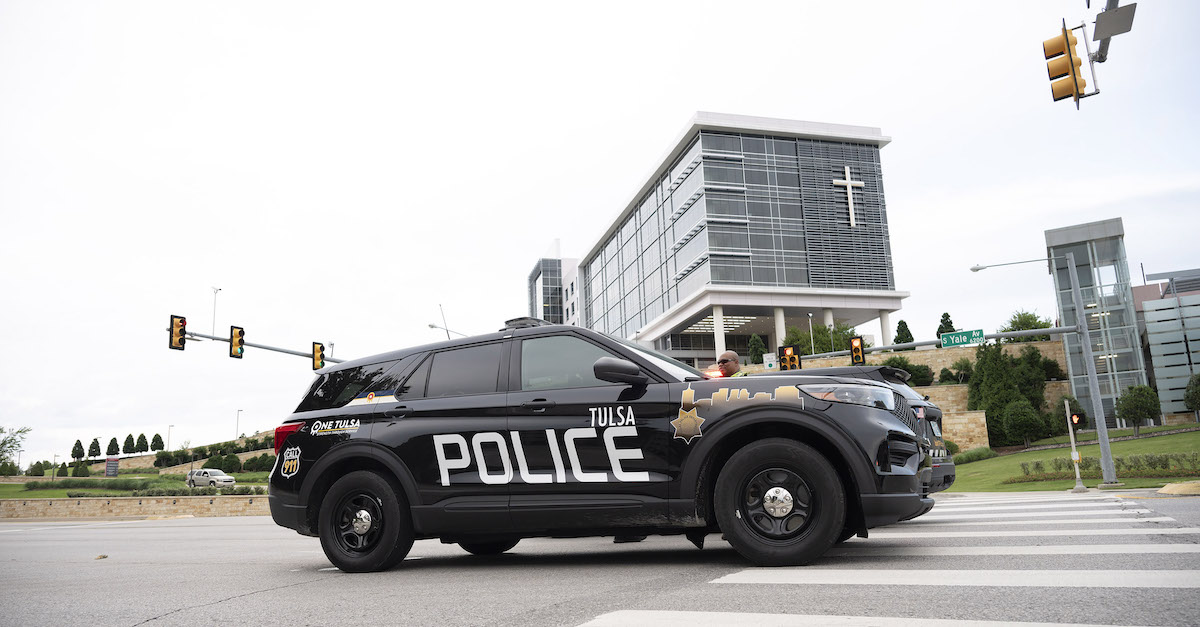 Police respond to the scene of a shooting at the Natalie Building at Saint Francis Hospital in Tulsa, Oklahoma, Wednesday, June 1, 2022.

“This is yet another act of violence on an American city,” Franklin said.

According to the police chief, Dr. Phillips performed back surgery on the suspect as recently as May 19. He was released from the hospital on May 24. In the ensuing days, the suspect called several times complaining of pain. On May 31, the doctor saw the patient again.

Then, the chief said, the suspect called on June 1, again complaining of back pain. That afternoon, the suspect allegedly bought a semi-automatic rifle from a local gun store. The police chief confirmed that the weapon was an AR-15-style rifle. The suspect had also recently purchased Smith & Wesson handgun at a pawn shop, Franklin added.

Authorities said that Louis had a letter on his person that indicated he “blamed Dr. Phillips for the ongoing pain following the [back] surgery.”

Cops believe the shooter intended to kill Dr. Phillips and anyone who got in his way.

A grocery store, a church, an elementary school, and now a hospital facility.

Authorities in Tulsa, Oklahoma announced late Wednesday that four people were shot and killed by a mass shooter armed with a handgun and a rifle who launched an attack on the Natalie Building at St. Francis Hospital. The shooter was also killed, according to cops.

The Tulsa Police Department posted an alert on Facebook on Wednesday afternoon warning the public of an “active shooter” incident.

“Earlier this afternoon, we responded to a call about a man armed with a rifle at the Natalie Building at St. Francis Hospital. This turned into an active shooter situation. At this point, we can confirm the shooter is down at this time,” police said. “Officers are currently going through every room in the building checking for additional threats. We know there are multiple injuries, and potentially multiple casualties.”

Reports quickly followed that multiple people were dead at the “catastrophic scene,” including the shooter—who has not been identified.

By 7:27 p.m. local time on Wednesday, police confirmed that four civilians were killed. The victims have not yet been named.

What was the police response?

In a briefing, Tulsa Police Department Deputy Chief Eric Dalgleish told reporters that authorities received a call at 4:52 p.m. about an active shooter. Officers arrived at 4:56 p.m., and “made contact with victims and the suspect” at 5:01 p.m. on the second floor, Dalgleish said.

Police heard gunshots upon arriving, which is what led them to the second floor, he added. No officers were injured.

Dalgleish said that he was “certain” the shooter died of a self-inflicted gunshot wound.

“I was very happy with what we know so far regarding the response of our officers,” the deputy chief said.

Who was the shooter?

In the briefing, Dalgleish identified the shooter only as a Black male between the ages of 35 and 40.

“We believe we are getting close on the identity of the suspect,” Dalgleish said Wednesday night.

The rifle, said to be an AR-15-style weapon, was reportedly purchased the day of the shooting; the handgun was reportedly bought on May 29, over Memorial Day weekend.

Dalgleish said he believes that both weapons were fired during the attack.

Cops have not yet made a statement about a potential motive behind the mass shooting, but additional information is expected to be released on Thursday morning.