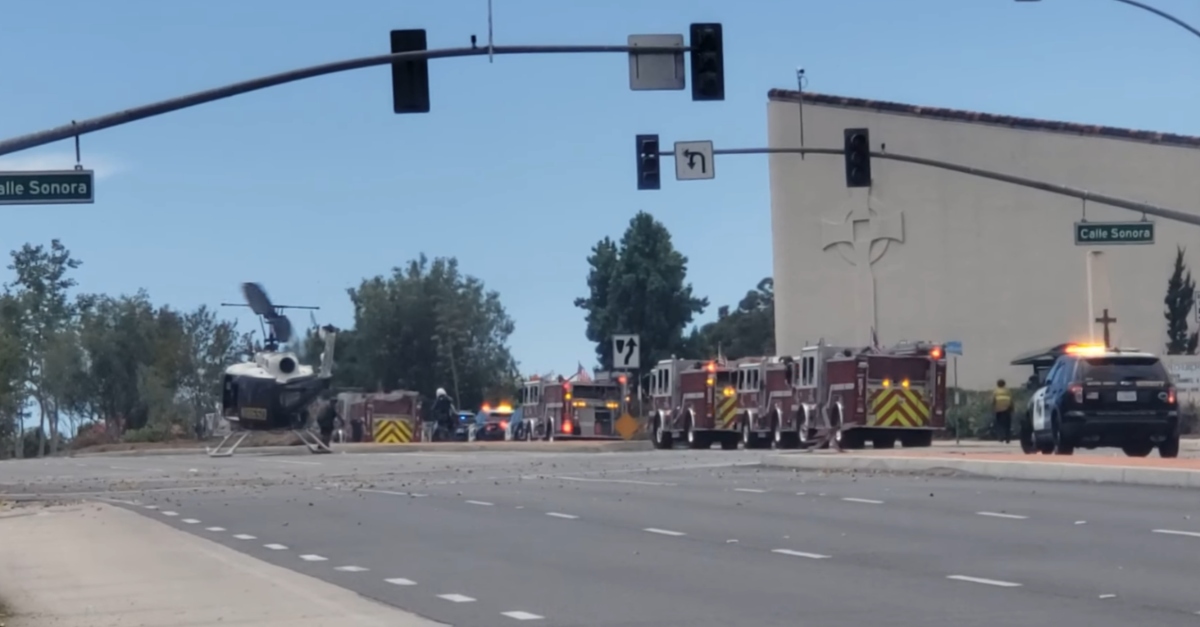 Bystander footage of authorities responding to a shooting Laguna Woods, California, on May 15, 2022.

Update – 9:53 p.m.: Congregants at a Laguna Woods church stopped a mass shooter before he could hurt more people, and they hogtied him with an extension cord before deputies arrived, California authorities said in a press conference Sunday.

“That group of churchgoers displayed what we believe to be exceptional heroism and bravery in intervening to stop the suspect,” Orange County Undersheriff Jeff Hallock said. “They undoubtedly prevented additional injuries and fatalities.”

Authorities only identified the shooting suspect as an Asian man in his 60s. He was uninjured, Hallock said. The motive remains under investigation, they said.

One person died at the scene, Hallock said. Four people were in critical condition. Hallock described a sixth person having minor injuries. He only identified them all as adults.

Dispatch got a call at about 1:26pm for the shooting at the Geneva Presbyterian Church, Hallock said. Deputies arrived within minutes, he said. First responders immediately applied medical aide, he said.

Noting that this is all preliminary information, Hallock said the shooting happened at a lunch banquet following morning services. 30 to 40 people were in the church, Hallock said. Two guns were recovered, he said.

Authorities do not believe the suspect lives in the area, he said. They do not know the motive, if the shooter had an intended target, or if this was a hate crime, he said.

Deputies from Orange County, California, say someone opened fire at a local church. A suspect was detained at the scene, they said.

Officers did not identify the victims. One person is dead. Four people are critically wounded, and one has minor injuries, authorities said.

Dispatch received call of a shooting inside Geneva Presbyterian Church at 1:26pm. Four victims have been critically wounded , one with minor injuries. All victims are adults and are enroute to the hospital. One victim is deceased at the scene.

“El Toro Road is closed between Calle Sonora and Canyon Wren, please avoid the area,” deputies said. “Authorities initially said they responded to reports of a shooting at a church on the 24000 block of El Toro Road in the city of Laguna Woods.”

Authorities did not immediately suggest a motive in the incident.

“We are actively monitoring the shooting at a church in Laguna Woods and working closely with local law enforcement,” said the office of California Governor Gavin Newsom. “No one should have to fear going to their place of worship. Our thoughts are with the victims, community, and all those impacted by this tragic event.”

“A shooting at a church in Laguna Woods has left multiple people injured,” said U.S. Rep. Katie Porter (D-California 45th District), who represents Orange County. “This is upsetting and disturbing news, especially less than a day after a mass shooting in Buffalo. This should not be our new normal. I will work hard to support the victims and their families.”

This incident follows the day after a gunman opened fire on a supermarket across the country in Buffalo, New York, killing 10 people and injuring three. Authorities said that was Payton S. Gendron, 18. Motivated by a racist ideology, he targeted the Tops Friendly Market specifically for its demographic. Officers described 11 of the victims as Black, and two as white.

Celestine Chaney, 65, Roberta Drury, 32, security guard Aaron W. Salter, 55, Ruth Whitfield, 86, and Pearly Young, 77, have been identified as among the slain victims. Survivor Zaire Goodman is said to be recovering.