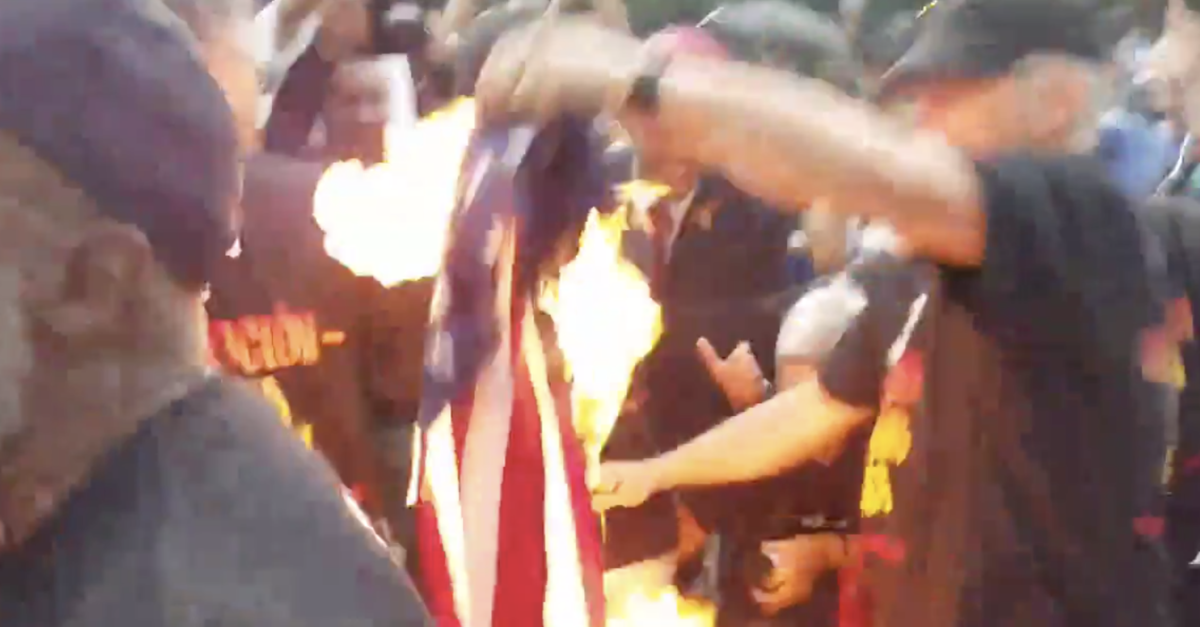 Everything old really is new again. Gregory “Joey” Johnson was once again arrested for a flag-burning, this time at an Independence Day protest in front of the White House.

Joey Johnson was just arrested by the Secret Service after burning an American flag outside the White House #FourthofJuly #SaluteToAmerica pic.twitter.com/eFbRn2dlhC

Although the Secret Service didn’t name names, USA Today reported that Johnson and another person were arrested on Thursday. The Secret Service said that one individual was arrested for alleged malicious burning and felony assault on a police officer, while a second person was arrested for allegedly obstructing police and resisting arrest. It’s not clear who was charged with what.

Secret Service statement on the flag burning incident on Pennsylvania Ave. during the #July4th activities in Washington D.C. pic.twitter.com/w72wLdYMRB

Sound familiar? It should.  In 1984, Johnson was involved in a major political protest against the Reagan Administration; during the non-violent protest, Johnson burned a flag outside Dallas City Hall. Johnson and others were arrested for various offenses – one of which was “desecration of a venerated object” in violation of the Texas penal code. Johnson, represented by civil rights attorney William Kunstler, appealed that conviction up to the United States Supreme Court, where he won. The Court ruled that Johnson’s flag-burning was “symbolic speech,” and therefore, his conviction violated the First Amendment; as a result, laws across forty-eight states that prohibited flag desecration were struck down as unconstitutional.

Texas v. Johnson became a landmark First Amendment case, standing for the principle that only a country that so dearly values free expression would protect an individual’s right to burn the very flag that symbolizes that freedom.

1984 wasn’t the end of Johnson and flag drama, though. In the years following, Congress enacted The Flag Protection Act of 1989; Johnson was again arrested for burning the flag. The case against him fell apart for lack of evidence – and the act itself was struct down shortly thereafter by the Supreme Court. Johnson was arrested again in 2016 for burning an American flag at the 2016 Republican National Convention. The case again went nowhere, and in 2019, the City of Cleveland agreed to pay Johnson to compensate him for the arrest which violated his free speech rights.

That brings us to this Fourth of July. As crowds gathered outside the White House awaiting the start of President Donald Trump’s “Salute To America,” protesters, including one Joey Johnson, burned an American flag. Johnson is a follower of Bob Avakian, chairman of the Revolutionary Communist Party. Here is how communists reacted to Johnson’s arrest on the website linked to Johnson’s Twitter account: 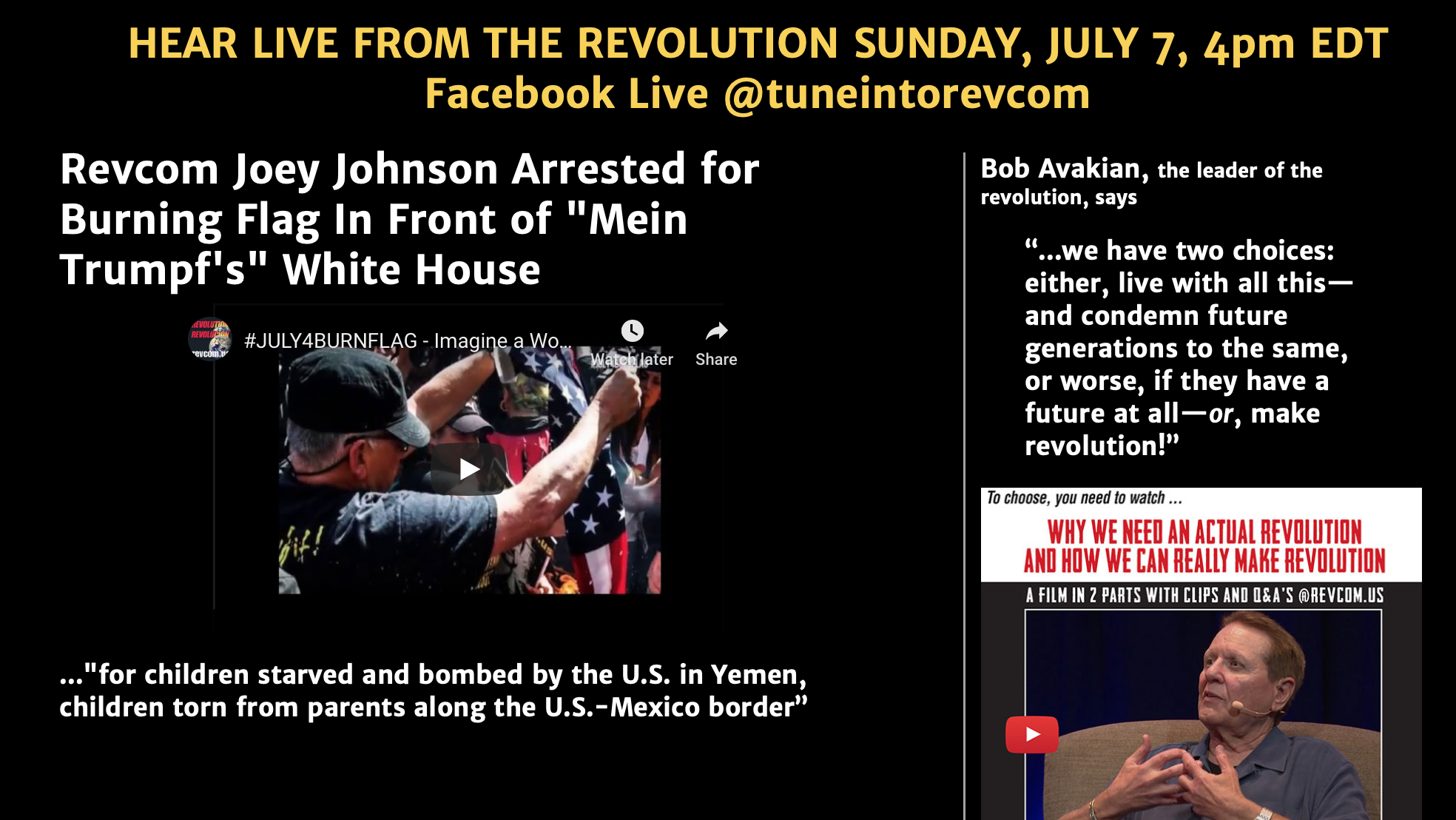 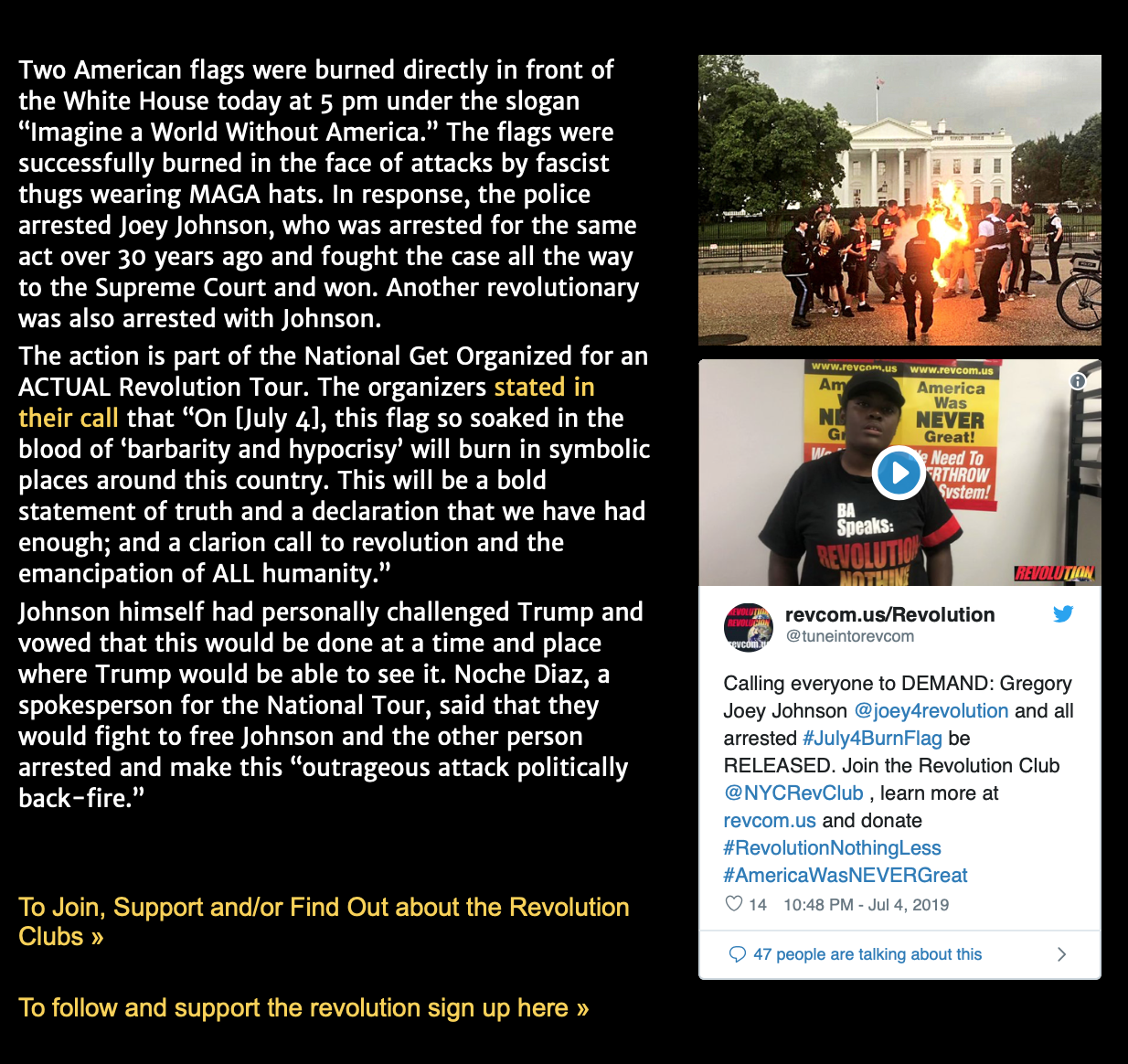 Video of the incident shows two men in “Make America Great Again” gear rushing to put out the flames, and later charging back toward protesters. One of those men identified himself as a veteran.

Footage of White House flag burning ahead of Trump’s #SaluteToAmerica

A man who identified himself as a veteran grabbed the burned flag #FourthofJuly pic.twitter.com/nJdWlMpdKp

Some of the counter-protesters have reportedly been identified as members of the Proud Boys, a far-right organization whose members describe themselves as “western chauvinists.”

Leftist protestors clashed with Trump supporters (including some members of the “Proud Boys”) after burning the American flaghttps://t.co/rZmZ17jnj7

Johnson and two other protesters were arrested, Lafayette Park was emptied of pedestrians, and three people (one protester and two Secret Service officers) were treated for injuries at a local hospital.