Lincoln Project Pens Scathing Threat to Sue Rudy Giuliani: ‘You Were Once a Respected and Respectable Figure’ 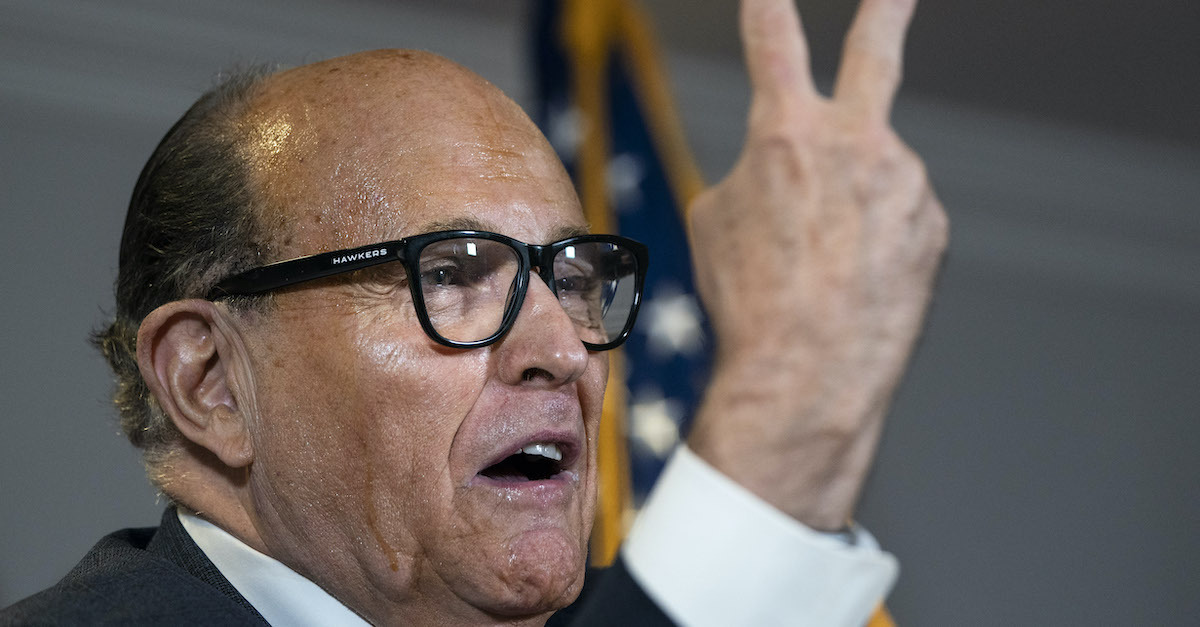 Attorneys for the Lincoln Project on Saturday issued a three-page letter to Rudy Giuliani which ordered him to “Preserve All Relevant Documents, If Any” regarding alleged “False and Defamatory Statements” made against the organization.

Demand letters are standard precursors to defamation lawsuits; they are required in certain defamation actions in some states.

The letter immediately took a shot at Giuliani’s credibility.  Its opening line is as follows:  “You were once a respected and respectable figure.”  The letter went on with citation-laden laundry list of events from Giuliani’s past several years (we’ve omitted the footnotes):

Your unfortunate, self-inflicted decline has been a public spectacle. You wanted to “lock  her up.” You panhandled foreign interests. You defended porn-star payoffs in eye-popping  media appearances. You revealed sleazy schemes in butt-dialed voicemails. You gave a mattress-top interview to someone you thought was a journalist “looking for more,” but turned  out only to be a comedian who showed you to be an easy mark. You represented the President of the United States in a parking lot press conference held right outside Four Seasons Total Landscaping, Fantasy Island Adult Bookstore, and Philadelphia Crematorium. You oozed hair dye while you spewed lies about the 2020 election. You assembled and led an “Elite Strike Force” legal team that somehow couldn’t manage to spell or to win in court.

The legally important missive continues by levying a caustic rebuke of Giuliani’s recent statements and activities — and it partially lays blame at his feet for the Jan. 6th siege on the U.S. Capitol Complex:

More important than any of that, though, you betrayed your country when you rose to speak on January 6, 2021 before a raucous crowd that your client, ex-President Donald Trump, had invited to gather a short distance from the U.S. Capitol. You promoted bogus conspiracy theories. You said the presidency had been “stolen.” You advocated an extra-constitutional  effort to overturn the obvious result of a free and fair election. You denigrated the established legal process for counting certified votes that would begin just moments later in a joint session of Congress. You directed people to “fight to the very end” to make sure that same process “doesn’t happen.” You shouted “Let’s have trial by combat!”

You told your zealots what to do. They listened. They vandalized. They terrorized. They injured. They killed.

On a recent broadcast, Giuliani claimed that the “Lincoln Project ‘planned’ the January 6th insurrection ‘in order to hurt’ Donald Trump,” the letter explains:

You claimed The Lincoln Project and “some right wing groups that operate for The Lincoln Project” were acting as “wolves in  sheep’s clothing,” suggesting that they had somehow disguised themselves as Trump supporters  while illegally occupying the Capitol. Mr. Bannon—yes, Steve Bannon—expressed doubt about your initial claim, but nevertheless you persisted by additionally asserting that “one of the people who organized this is well known for having worked with The Lincoln Project in the past.”

Giuliani bewilderingly claimed he got his information from an “anonymous” person whose name he could not “reveal,” the letter recounted. Even Bannon said Giuliani couldn’t just “throw a charge out there like that” without clear attribution. Giuliani continued pressing the “fantastical claim . . . for the remainder of [his] appearance,” the letter says.

“You committed a textbook act of defamation. You publicly accused The Lincoln Project of an infamous and criminal act that it had nothing to do with, as you very well know,” the letter then says.  “You lied.”

The letter demands that Giuliani retract his comments and fully apologize by Wed., Feb. 3.

“Refuse at your peril,” the Lincoln Project attorney warns Giuliani.  “In the meantime, you are hereby notified that you should retain any and all documents, including emails and other electronic files, relating to this matter. You will never again be America’s Mayor, but there may still be time to save  some of the cash that you pawned your credibility for, should Dominion Voting Systems ultimately leave you with any.”

The letter cites thirteen contemporary news reports about Giuliani’s recent activities, including one from Law&Crime.  The cited report recounted Giuliani’s attempt to explain his comments preceding the Jan. 6th siege on the U.S. Capital Complex as being derived from the “Game of Thrones” — which he called a “very famous documentary” about “fictitious medieval England.”  (Documentaries aren’t fictitious.)

Prior to the Jan. 6th siege, Giuliani said, “let’s have trial by combat.”  Shortly thereafter, Trump supporters said they left the rally and went to the capitol.  Chaos ensued.

The Lincoln Project Letter to Rudy Giuliani (Final 1.30.2021) by Law&Crime on Scribd