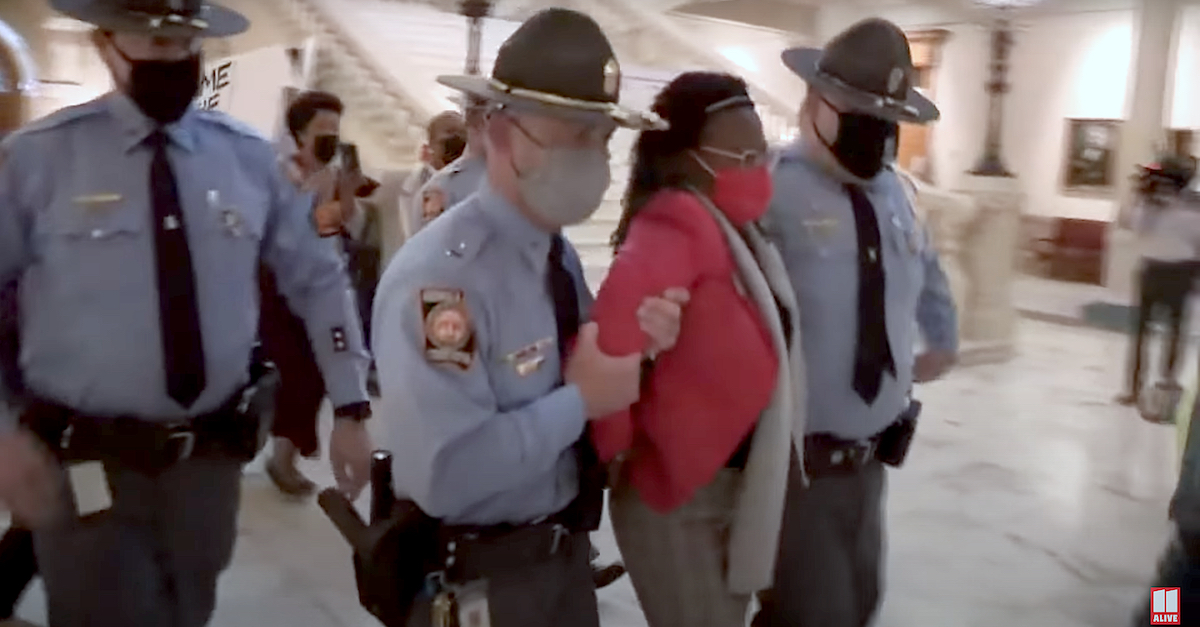 Lawyers are sounding off about the arrest late Thursday of Georgia Rep. Park Cannon (D). The Atlanta lawmaker was handcuffed and led away from state capitol offices where Gov. Brian Kemp (R) was signing a bill which criminalized, among other things, giving water to voters standing in lines at the polls. Cannon is among the many vocal critics of the new laws.

The Atlanta Journal-Constitution reported that Cannon’s minor offenses included knocking on the governor’s door. The knock reportedly interrupted Kemp’s live announcement that the bill had been signed.

According to the Georgia State Patrol, Cannon “was advised that she was disturbing what was going on inside and if she did not stop, she would be placed under arrest,” spokesman Lt. W. Mark Riley told the Journal-Constitution. “Rep. Cannon refused to stop knocking on the door.”

WSB-TV reported that Cannon knocked on a public door to the governor’s lobby and later knocked on a private door. NBC News obtained video which showed the knock which led to the arrest. It appears to have occurred in an area accessible to the public, as others were standing nearby recording the scene as it unfolded.

WXIA-TV recorded the events from yet another angle:

The lawmaker is charged with obstructing law enforcement and disrupting General Assembly sessions, the paper said. The first charge (§ 16-10-24(b)) is alleged to have involved “violence” and, thus, is a felony punishable by between one and five years in prison. The second charge (§ 16-11-34.1(h)(3)) is alleged in court papers as a third offense, making it a felony punishable by between one and three years in prison.

Arrest warrants show Cannon was charged with “knowingly and intentionally” knocking on Kemp’s door during a bill signing and “stomping” on an officer’s foot three times. I’m told she’s in the process of getting released from the jail now. #gapol pic.twitter.com/zD6q7DD35F

One version of the incident appears in an Instagram video. In it, a group of white officers surrounds Cannon — who is already in handcuffs — and attempts to move her toward an elevator and out of the building. At first, she walked with them; at another point, she turned backwards. The officers dragged her upright to a waiting elevator. They appeared to ignore multiple and repeated requests to explain precisely why they were detaining Cannon.

“Where are you taking me?” Cannon appears to ask.

“We sit here every single day and we defend these bad bills like SB 202, and all we ask is for her to be able to see them sign a bill that is signing our rights away,” one bystander who appeared to be a fellow lawmaker said in the video. “And you arrested her! She did not touch anybody; she did not say any slanderous words . . . but you’re going to tell me that you arrested a sitting state representative for nothing! She didn’t do anything but knock on the governor’s door! I’m done! I’m so done! I’m so done! Protect and serve who?  rotect and serve who? Protect and serve the Georgians because she knocked on the door? You just arrested a state representative? I’m done.”

“You think this is going to go over well?” one person asked.

“Why, if Governor Kemp is so proud of his bill, and the Georgia GOP is so proud, why are they doing it behind closed doors?” another person asked.

“Cite the code!” people continued to demand of the officers who effectuated the arrest.

Griggs said he had already talked to Fulton County District Attorney Fani Willis and hoped the charges would dismissed.

Hey everyone, thank you for your support. I’ve been released from jail. I am not the first Georgian to be arrested for fighting voter suppression. I’d love to say I’m the last, but we know that isn’t true. #SB202

#SB202 restricts many methods of voting. These restrictions serve no purpose other than to keep voters from exercising their constitutional right to vote. https://t.co/26zXWSBC2x

And make no mistake, when I say hate, I mean white supremacy. The closed-door signing of #SB202 and the senseless murder of #AAPI Georgians are both products of a white supremacist system. Different tactics, same goal: fear and control.

Atlanta attorney Page Pate tweeted that the “arrest was both unnecessary and unlawful.”

“A person cannot be arrested for felony obstruction unless the person is ‘offering or doing violence’ to an officer who is acting in the ‘lawful discharge’ of his or her duties,” Pate continued.

A person cannot be arrested for felony obstruction unless the person is “offering or doing violence” to an officer who is acting in the “lawful discharge” of his or her duties.

Other critics suggested that the statutes simply didn’t fit the alleged conduct:

A reading the text of O.C.G.A. § 16-11-34.1, which is what Rep. Cannon was charged with violating, shows that the only people who violated the law were the State Patrol officers who arrested Rep. Cannon. She did nothing that violated the statute.

It is also disturbing that a magistrate judge signed the arrest warrant. A reading of the statute and the affidavit by the State Patrol officer shows that the officer has not alleged a violation of the statute as the governor is not a member of or part of the General Assembly.

Moreover, they charged Rep. Cannon with a felony. But unless Rep. Cannon was previously convicted of violating the statute twice before, it can only be a misdemeanor.

This is potentially significant, because as a member of the General Assembly, Rep. Cannon is immune from arrest for misdemeanors. This suggests that the State Patrol officers are trying to cover up for an illegal arrest.

1. A bill signing by the governor is not a meeting of the General Assembly.

The arrest of my friend and colleague, Rep. Park Cannon, at the Capitol last night was beyond unacceptable. If you agree, please consider a donation toward her legal fees. #IStandWithPark #gapol https://t.co/qQG8P6GP29

Privilege of members. The members of both houses shall be free from arrest during sessions of the General Assembly, or committee meetings thereof, and in going thereto or returning therefrom, except for treason, felony, or breach of the peace. No member shall be liable to answer in any other place for anything spoken in either house or in any committee meeting of either house.

[image via screengrab from WXIA-TV/YouTube]