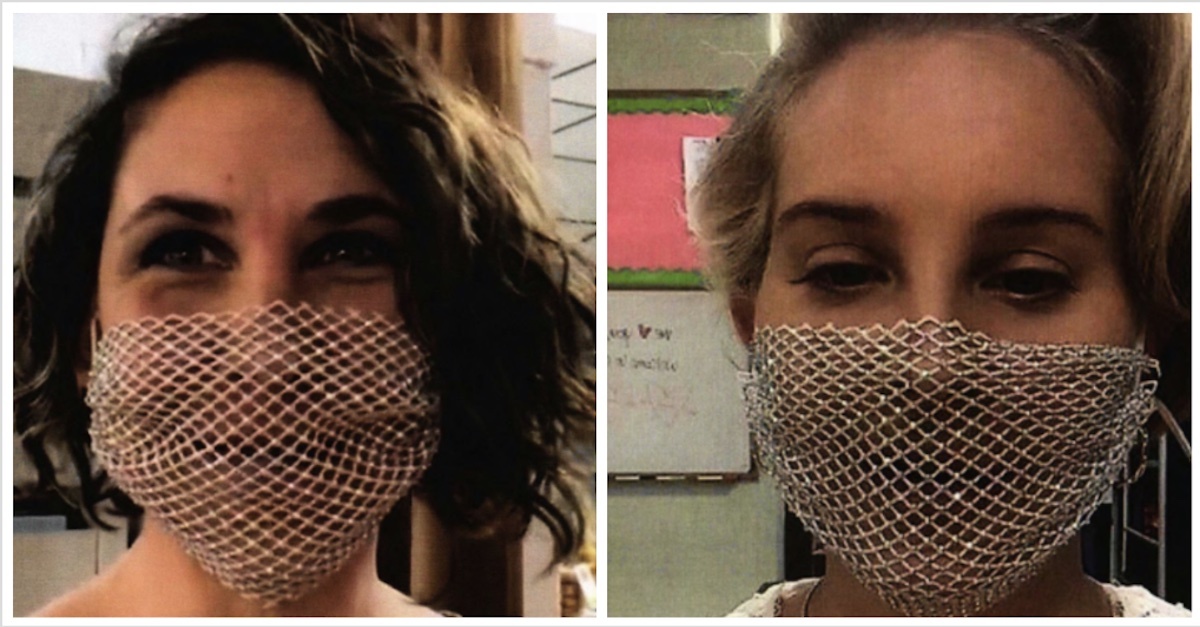 An accused U.S. Capitol rioter known online as the “Bullhorn Lady” apologized through her attorney on Monday, claiming that her photo appearing to mock and flout a court order requiring her to wear a face mask was simply an homage to singer Lana Del Rey.

Both the alleged rioter and the pop star donned a see-through “mesh mask,” but Del Rey’s had a clear plastic barrier to make it effective. Powell’s defense lawyer said his client’s “mask” choice was “clearly unwise” and a “poor choice,” but was not “done with a bad intent.” 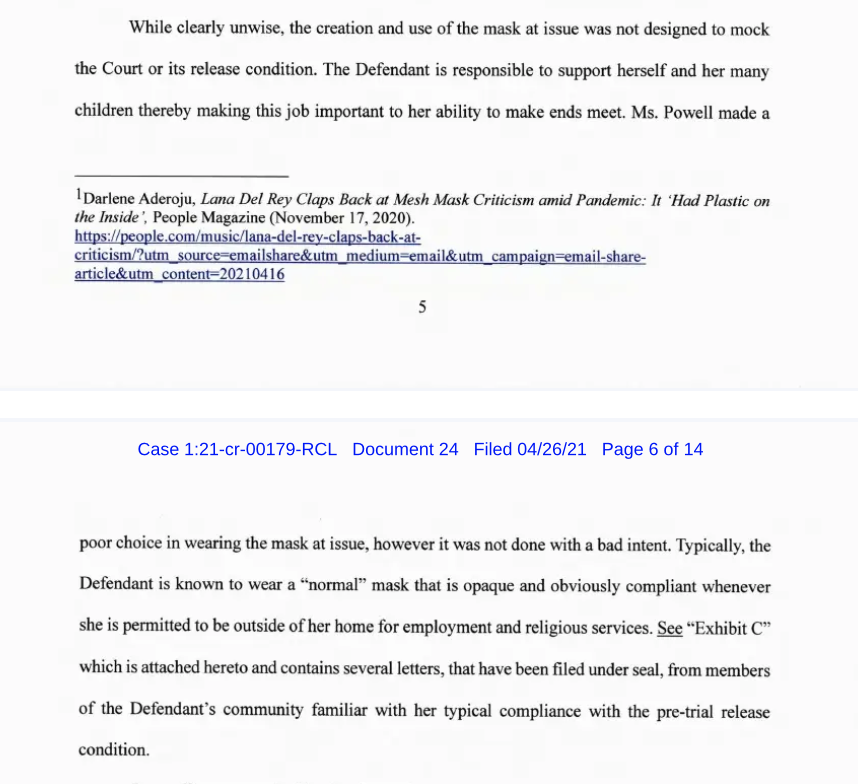 “The Defendant wishes to apologize to this Honorable Court, and to Pre-Trial Services, for her poor choice and her unwise conduct in this matter,” Michael J. Engle, an attorney for Rachel Powell, wrote in a Monday filing with the U.S. District Court in Washington, D.C. “It was not Ms. Powell’s intention to mock compliance with her condition of release or to flout the Court’s Order lightly.”

As Law&Crime discussed at length on April 9, a since-deleted video posted at the end of March on the Facebook page of Mr. Bookman’s — a used book store in Western Pennsylvania — showed Powell wearing the mesh mask in question. The problem was that Powell, as a unique condition of her pretrial release, was ordered by Chief U.S. District Judge Beryl A. Howell to “wear a mask whenever she leaves her residence.”

“No reasonable person could think that defendant’s ‘mask’ complied with that condition, which Chief Judge Beryl A. Howell imposed to ensure that defendant ‘would not pose a risk to the health and safety of the community when she left her house,’” Lamberth wrote. He ordered Powell to explain why her pre-trial release shouldn’t be revoked for noncompliance.

Powell’s attorney claimed in a Monday filing that the mesh mask was actually an attempt to reach a compromise between Mr. Bookman’s anti-mask practices and the court-ordered mask mandate.

“[T]he Defendant found herself in a work situation where she was encouraged to refrain from mask wearing at times when she was required to engage with store customers. Ms. Powell refused to do this and instead sought to find a mechanism for complying with the Court’s Order while also satisfying her employer,” the filing states. “As described in the Defendant’s affidavit, Ms. Powell had seen stories about a singer, Lana Del Rey, who fashioned a mask with a clear plastic barrier under a see-through fabric for a public book signing event.”

While Lana Del Rey did come under fire for wearing a mask that was similar to appearance to Powell’s at a book signing in October, she later clarified that the masks were specially designed and still provided protection.

Great article. The mask had plastic on the inside. They’re commonly sewn in by stylists these days. I don’t generally respond to articles because I don’t care. But there ya go. Same goes for everyone’s masks in my video. I’m lucky enough to have a team of people who can do that

Powell’s affidavit was filed under seal for undisclosed reasons.

Mr. Bookman did not respond to Law&Crime’s press inquiry about whether the store enforced a policy against wearing masks or whether any of Powell’s supervisors were aware of the court order by press time.

Powell’s lawyer Engle wrote that his client would reduce her hours at Mr. Bookman and only perform back office work that doesn’t require her to interact with customers in order to remain in compliance with the terms of her release.

Engle also clarified to the court that he never advised his client to dispose of the mask at the center of the controversy, which Judge Lamberth described as “evidence of [Powell’s] non-compliance.”

“At the time the Defendant made the decision to throw away the mask in question, she was not under any instruction from the government, Pre-Trial Services, or any other authority to maintain and preserve the item,” Engle wrote. “Ms. Powell rid herself of the mask based on the government’s April 9th request to counsel that she not wear such a mask, and the instruction from her counsel to never wear that mask, or one like it, ever again. Her action in this regard was not designed to be willful, non-compliant or disrespectful to this Court or its Order of Pre-Trial Release.”

Powell was arrested in February for her alleged role in the Jan. 6th U.S. Capitol breach. Viral video of the siege apparently showed a woman, quickly dubbed by many on social media as the “Bullhorn Lady,” directing other rioters with a bullhorn and giving them information about the U.S. Capitol’s layout. Federal prosecutors have alleged that Powell, seen wearing a pink hat, was one of the people who used a large pipe as a makeshift battering ram to break windows at the Capitol Complex.