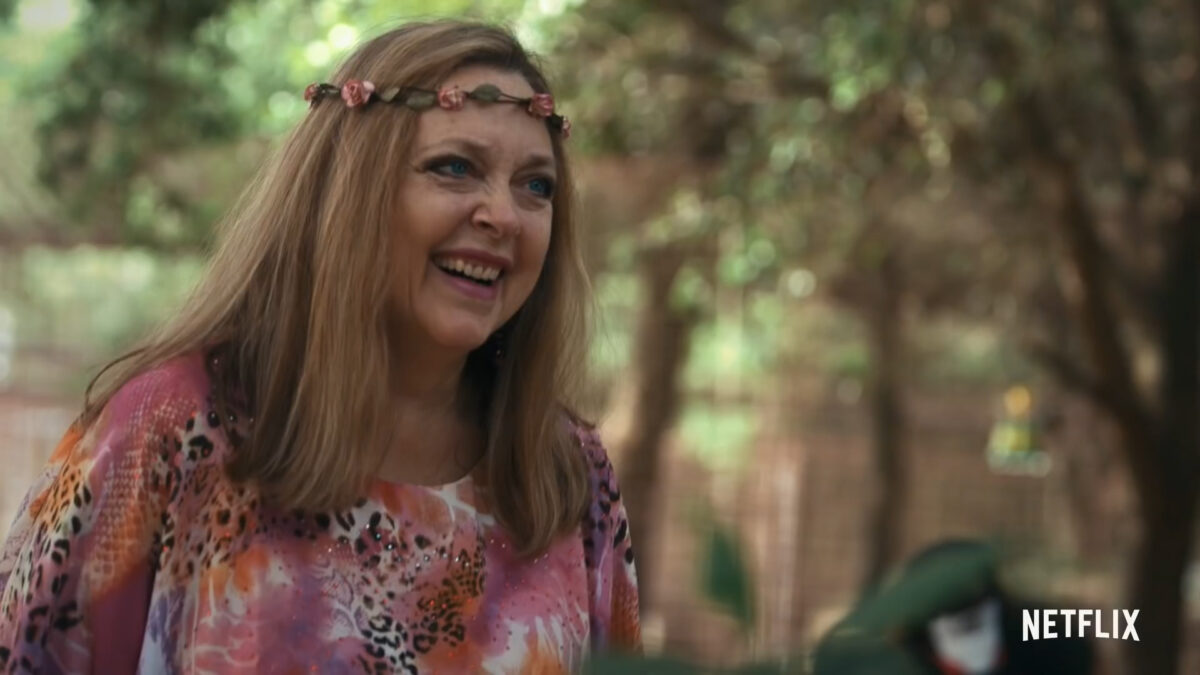 Tiger King subject Carole Baskin and her husband Howard Baskin have sued Netflix and Royal Goode Productions on allegations that the companies behind the famous film breached appearance release agreements by portraying the project as a bona fide documentary and then turning it into a so-called “soap opera-esque drama.” Last Monday night, a judge refused to immediately shut down the release of a second season of the high-profile film.

In the lawsuit, Baskin refers to herself as the operator of “one of the world’s most influential sanctuaries for exotic cats.” She alleges breach of contract (under New York law) and seeks a declaratory judgment against the defendants. The lawsuit was filed in U.S. District Court for the Middle District of Florida in Tampa.

Several pages of the 21-page complaint throw Joe Exotic (Joseph Maldonado-Passage) under the bus. Joe Exotic, the “Tiger King” himself, was sentenced to prison for a murder-for-hire plot against his “big cat” rival Carole Baskin, the filing notes:

In one highly publicized case, Joe Schreibvogel n/k/a Joe Maldanado- Passage a/k/a Joe Exotic (“Joe Exotic”), the operator of a private roadside zoo and prolific breeder of big cats and purveyor of cub petting services sought to discredit and silence the Baskins’ and their advocacy through years of constant and persistent intimidating and libelous social media attacks and physically during one incident at Big Cat Rescue.

When Joe Exotic misappropriated the trademarks and copyrights of Big Cat Rescue in an attempt to tarnish the Baskins’ goodwill by falsely suggesting that Big Cat Rescue was – itself – engaged in commercial cub petting practices, litigation ensued that resulted in a Judgment in excess of $1 million being entered against Joe Exotic and his roadside zoo. Actions to enforce this Judgment allowed the Baskins to succeed in finally shutting down Joe Exotic’s “zoo” and big cat breeding mill.

Faced with the financial pressure of the ongoing litigation and the Baskins’ successful exposing of his mistreatment of animals, in 2017 Joe Exotic solicited a “hitman” to murder Carole Baskin. The plot was uncovered, and Joe Exotic was arrested and convicted, not merely for the murder-for-hire plot, but also for numerous violations of federal law related to the killing of and illegal trafficking in big cats.

The Baskins then complained that the ultimate product — Tiger King — was not what they first thought. They claim in the lawsuit that they were led to believe that the project was intended as a “single documentary feature film that would be an expose’ of the big cat breeding and cub petting trade akin to the documentary feature film entitled Blackfish.” Rather, it turned into Tiger King, which the Baskins allege is not what they thought:

Far from being a documentary motion picture that seeks to expose the illicit trade of big cat private ownership, breeding and cub petting, Tiger King 1 is a seven (7) episode series focused primarily upon portrayal of Joe Exotic as a sympathetic victim and Carole as the villain. Even the producer of Blackfish criticized Tiger King 1 saying that issues surrounding big cats were “lost in the show’s ‘soap opera-esque drama.'”

The plaintiffs allege that Tiger King 1 was “particularly harsh and unfair in its depiction of the Baskins and Big Cat Rescue.” Then they mention the show’s treatment of the disappearance and presumed death of Carole Baskin’s first husband, Don Lewis:

The Tiger King 1 series wrongly attempted to suggest that Big Cat Rescue abused its animals by keeping them in very small cages while not making clear that the animals actually reside in expansive enclosures. Also, Tiger King 1 incorrectly suggests an equivalency between Big Cat Rescue and Joe Exotic’s roadside zoo, and more broadly that there is no difference between roadside zoos that exploit and mistreat animals and accredited sanctuaries that rescue and provide excellent lifetime care to the animals. Perhaps most pernicious is the over-arching implication in Tiger King 1 that Carole Baskin was involved in the disappearance of her first husband in 1997.

Through Royal Goode Productions initially claimed it was entirely uninterested in another series, it allegedly reconsidered; Baskin says she told the producers did not want to participate.

“No,” the lawsuit quotes her as telling them. “And lose my number.”

The crux of the case is that the Baskins believed their initial contracts only contemplated appearances in a “single, initial documentary motion picture” — not a subsequent production. They allege footage of them was used in a second season — Tiger King 2 — which is already being promoted. According to their lawsuit (emphasis in the original):

The Appearance Releases limited Royal Goode Productions right to use film footage of the Baskins to “a documentary motion picture.” Throughout the Appearance Releases there is only reference to and mention of “the Picture.” No mention is made of granting Royal Goode Production sequel rights, rights to create derivative works from “the Picture” or additional seasons or episodes.

Defendants’ unauthorized use of the film footage of the Baskins and Big Cat Rescue secured by Royal Goode Productions under the Appearance Releases will cause the Baskins irreparable injury for which the Baskins have no adequate remedy at law.

The Baskins, in essence, asked a court to shut down Tiger King 2 by “permanently enjoin[ing] and restrain[ing]” the defendants from “[u]sing any film footage of the Baskins or Big Cat Rescue filmed by Royal Goode Productions in the sequel series entitled Tiger King 2” or in concomitant advertising materials.

Late Monday, U.S. District Court Judge Virginia Maria Hernandez Covington refused to immediately shut down Tiger King 2 through a temporary restraining order — but she did refer the matter to a magistrate judge to determine whether a preliminary injunction might be appropriate.

“Here, the Court is not convinced at this juncture that the Baskins’ anticipated injury — including injury to their reputations — if the previously obtained footage of them is used in the new documentary qualifies as irreparable,” the judge wrote. “While the Court understands the Baskins’ frustration, it does not appear that inclusion of Defendants’ footage of the Baskins will cause any immediate harm that cannot be compensated with monetary damages.”

Proof of irreparable injury is necessary before a judge may issue a TRO.

Read the full lawsuit and the judge’s order below: