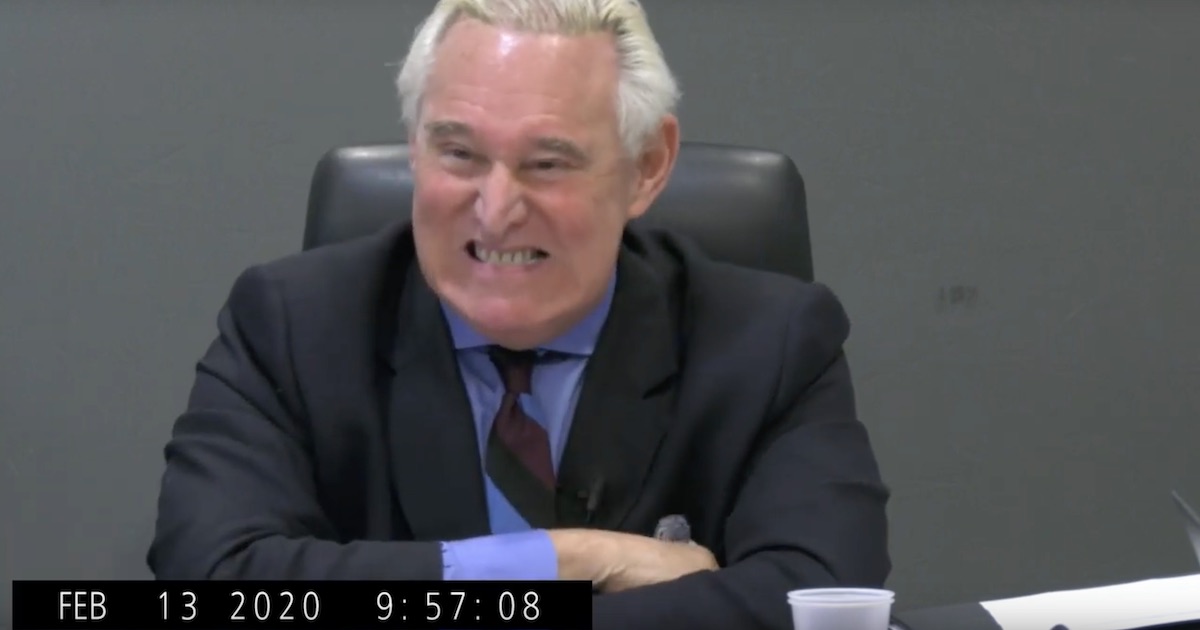 Who wants to sit for a deposition, let alone watch one? We’re guessing few people will respond in the affirmative. An exception could and should be made for Larry Klayman’s deposition of Roger Stone more than two weeks ago. It is a five hours-plus roller coaster and Stone, who has since been sentenced to federal prison, flipped out on multiple occasions.

Necessary context: Klayman is a conservative lawyer who has represented George Zimmerman, Laura Loomer, and Jerome Corsi, to name a few. He founded conservative groups Judicial Watch and Freedom Watch, and once explored a Senate run in Florida in the early 2000s. He and Stone have a history there, which repeatedly comes up during the deposition. Klayman got the go-ahead from a Florida judge to conduct the deposition because he argued a Stone imprisonment might make a deposition impossible down the line.

Klayman helpfully notes that this deposition was meant to kill six birds with one stone:

The cases against Stone, filed by Corsi and Klayman, seek large damages for his defamatory and other tortious acts (and for which discovery was consolidated), include:

The deposition took place in the days before Stone was sentenced on seven criminal counts for witness tampering, obstruction, and lying to federal investigators amid the Russia probe. In the videos, Stone appears to be on edge; he is certainly annoyed with Klayman’s questioning and lashes out numerous times.

Day one of the deposition:

The deposition began on Feb. 12, 2020, just after 9:40 a.m. in Florida. As Klayman was reading off the slew of cases relevant to the deposition, a ring tone went off (1:20-mark). Then he brought up an apparent mix-up about the location of the deposition (Stone was late that morning for it). Klayman asked: Didn’t you get my email?

“It seems extraordinarily petty to me,” Stone said.

“Your time’s not more valuable than mine,” Stone replied.

“You have little to no respect for court or judicial process do you?” Klayman asked. “Objection,” chimed in Stone attorney Robert Buschel. This was a word he would end up using often.

This exchange happened within the first 4 minutes of the deposition. Things got much more contentious from there.

For example, after the 15-minute mark, Klayman asked Stone what computers the FBI seized during its raid at Stone’s residence.

Buschel said they weren’t going to answer questions related to the criminal case, but Klayman said this was relevant to document production.

“No, you’re going to wind up getting sanctioned, Mr. Klayman. Like you are in D.C., so let’s go,” Stone said, seemingly referring to a report by the Board on Professional Responsibility.

“Let’s not do that,” Buschel advised.

“Why not?” Stone asked. “I’m not going to be badgered by this asshole.”

One hour and five minutes in, Klayman quotes Stone on an InfoWars broadcast saying, “He [Klayman] is incompetent. He’s a numbskull, he’s idiotic, and he’s an egomaniac, and he could be the single worst lawyer in America. With him as Jerry Corsi’s lawyer, Corsi may get the electric chair. So your idea that he’s a good guy is entirely wrong.”

“Yes–I doubt it. Generally you need evidence to get your case that far,” Stone shot back.

The deposition had many snippy exchanges like this one. At one point, Stone said “Fuck you!” to Klayman.

Klayman grilled Stone on a Newsmax interview of Cassandra Fairbanks, in which she said Corsi was a liar, per Klayman. Stone said he had nothing to do with that interview. Klayman wondered: But what about Newsmax’s John Cardillo’s tweets in support of Stone and calling him a good friend.

“That’s what you told Mueller, right?” Klayman said to an increasingly agitated Stone.

“If you want to keep insulting me, you can run right back to the judge like a little bitch,” Stone erupted.

“I’m doing what?” Klayman asked. “Did you just call me a bitch?”

“You’re acting like one,” Stone responded.  “You’ve got nothing!”

“You can look for it all you fuckin’ want, you’ve got nothing!” Stone continued. “It reaches a point of absurdity.”

Video three began with what might appear to some to be a Jeopardy! answer: “What is a bitch?”

“What’s the point of that?” Buschel asked. “Mr. Klayman ask a question.”

“What is a bitch?” Klayman asked.

“You don’t know? You’re unfamiliar with the term?” Stone asked.

“Is that someone who’s gay?” Klayman wondered.

“No, it most certainly is not,” Stone replied.

“He called me that,” Klayman said.

“Is that really what you think it means? C’mon,” Buschel said.

And then there was day two…

This time the deposition started on time, but the results were no different from the day before (See 10:55).

Klayman asked: Remember that time where I was going through Dulles Airport with cats and I was detained?

“As I recall it, you were detained because you made some joke about the cat not having a bomb,” Stone said.

Klayman asked if Stone fed a story about that to the Miami Herald after Stone had stopped working as a consultant for Klayman’s Senate campaign.

Stone denied it and said he had no knowledge former Trump campaign adviser Michael Caputo did so either. Again, Stone said Klayman had no evidence.

“Why would anybody make a statement–a joke about a bomb–while going through TSA. Shows me a lack of judgment in all honesty, particularly somebody running for the U.S. Senate,” Stone said.

“You haven’t shown a lack of judgment with regard to your conviction?” Klayman asked.

At the end of this video, Klayman wanted the record to reflect that Stone was convicted of “five counts of perjury.”

“You’re defaming me,” Stone gritted his teeth. “Let the record show that this man’s bar license is under attack in New York for his serial misconduct.”