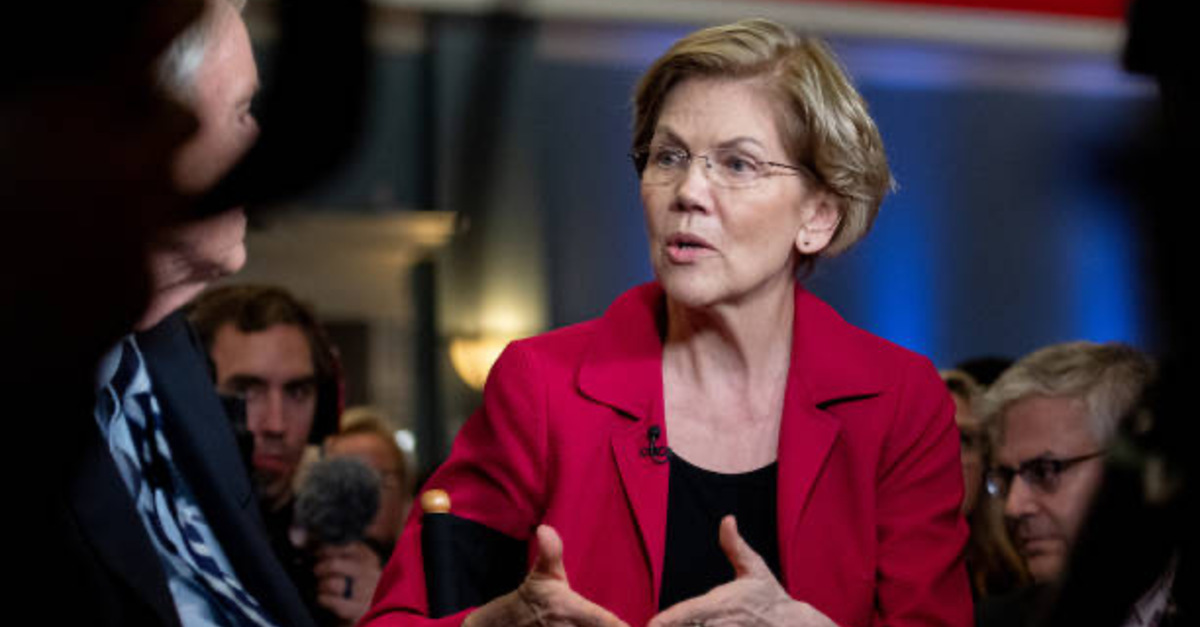 Sen. Elizabeth Warren (D-Mass.) recently surprised supporters and opponents alike by embracing a Super PAC set to over $14 million on her behalf in several Super Tuesday states—just days after condemning her opponents in the 2020 primary for their own alleged acceptance of such outside spending groups.

Perhaps even more troubling for Warren’s progressive base of supporters, however, is that Persist PAC’s leadership is directly connected to the oil and gas industry.

The independent expenditure group was founded earlier this month in a bid to boost Warren after she failed to win any of the first three nominating contests—and right when her campaign was nearly out of money.

Initial reports described Persist PAC as being founded by “a group of progressive women.”

Warren herself echoed the Super PAC’s language to this effect when offering excuses for backtracking on the issue.Invoking gender dynamics, she said:

We reached the point a few weeks ago where all of the men who were on the debate stage all had either super PACs or they were multibillionaires who could rummage around in their sock drawers and find enough money to be able to fund a campaign, and the only people who didn’t have them were the two women. At that point, there were some women around the country that said, that’s just not right.

But that’s just not the whole truth.

According to Federal Election Commission (FEC) data, Persist PAC’s Custodian of Records and Treasurer is Chris Koob, who previously worked in one of the highest-ranking executive positions for the oil drilling advocacy group Securing America’s Future Energy (SAFE), according to his LinkedIn.

“It’s significant that Warren’s Super PAC is being run by the former head of an oil lobbying group given that Warren has pointed to [the Sunrise Movement’s] endorsement of Sanders as justification for reneging on her promise to reject Super PAC support,” he added.

Securing America’s Future Energy (SAFE) is a non-profit that describes itself as uniting “prominent military and business leaders to develop and advocate for policies that improve America’s energy security by significantly curtailing our dependence on oil and promoting responsible use of our domestic energy resources.”

The term “domestic energy resources,” however, is generally understood to be a hydrocarbon industry euphemism for oil and gas. In fact, that’s exactly what SAFE means.

According to SAFE’s own website, at least two major red flags appear that put the group heavily at odds with Warren’s own policy positions and the general Democratic Party electorate—including most elected officials whether centrist, moderate or left-leaning.

To wit, the group favors the controversial policy of oil drilling in the arctic and promotes increased fracking—but not just domestically.

SAFE is considered to be a “middle ground player” that operates somewhere in between groups dedicated to reversing climate change, like the Sunrise Movement, and the same industries that rely and thrive upon oil and gas exploration. The extent of the non-profit’s exposure to industry, however, is currently unknown—SAFE does not have to and has declined to release a full list of its donors.

A Houston Chronicle article from 2017 notes:

Membership on SAFE’s board fits two categories: military figures such as Adm. Dennis Blair, former director of national intelligence, and Gen. P.X. Kelley, former commandant of the Marines, and executives of companies that have large fuel budgets, such as Fred Smith, the FedEx CEO, and David Steiner, the CEO of the Houston trash hauling company Waste Management.

Law&Crime reached out to SAFE for comment and clarification on this article but no response was forthcoming at the time of publication.

The Massachusetts senator’s heavily-criticized volte face on Super PAC funding was initially skewered in the press for almost instantly undoing her most popular applause line during the New Hampshire debate.

“I heard everyone here talking about as Democrats, we all want to overturn Citizens United because we want to end this unlimited spending,” Warren said during the Democratic debate earlier this month in New Hampshire. “Yeah, except everyone on this stage except Amy [Klobuchar] and me is either a billionaire or is receiving help from PACs that can do unlimited spending.”

Warren’s campaign later tweaked her criticism to clarify and single out Super PACs via Twitter:

I hear everyone talking about how we all want to overturn Citizens United because we want to end unlimited spending. Everyone on this stage except Amy and me is a billionaire or receiving help from Super PACs. Time to put your money where your mouth is. #DemDebate

“We’ve got to overturn Citizens United because our democracy is not for sale,” Warren’s website miraculously still says. “In the meantime, Democrats should show some moral backbone by refusing their own Super PACs in the 2020 primary.”

The candidate attributed her flip-flop heard round the world to political expediency, saying she’ll ask her Super PAC to stand down only if everyone else does the same. Notably, however, Sen. Bernie Sanders (I-Vt.), the Democratic Party frontrunner, does not have a Super PAC spending directly on his behalf.

“So here’s where I stand. If all the candidates want to get rid of super PACs, count me in. I’ll lead the charge,” Warren said. “But that’s how it has to be. It can’t be the case that a bunch of people keep them and only one or two don’t.”

Now, however, Warren’s open arms for Persist PAC’s much-needed help on Super Tuesday opens the senator to another charge altogether: undeniable proximity to advocates for increased oil and gas drilling.