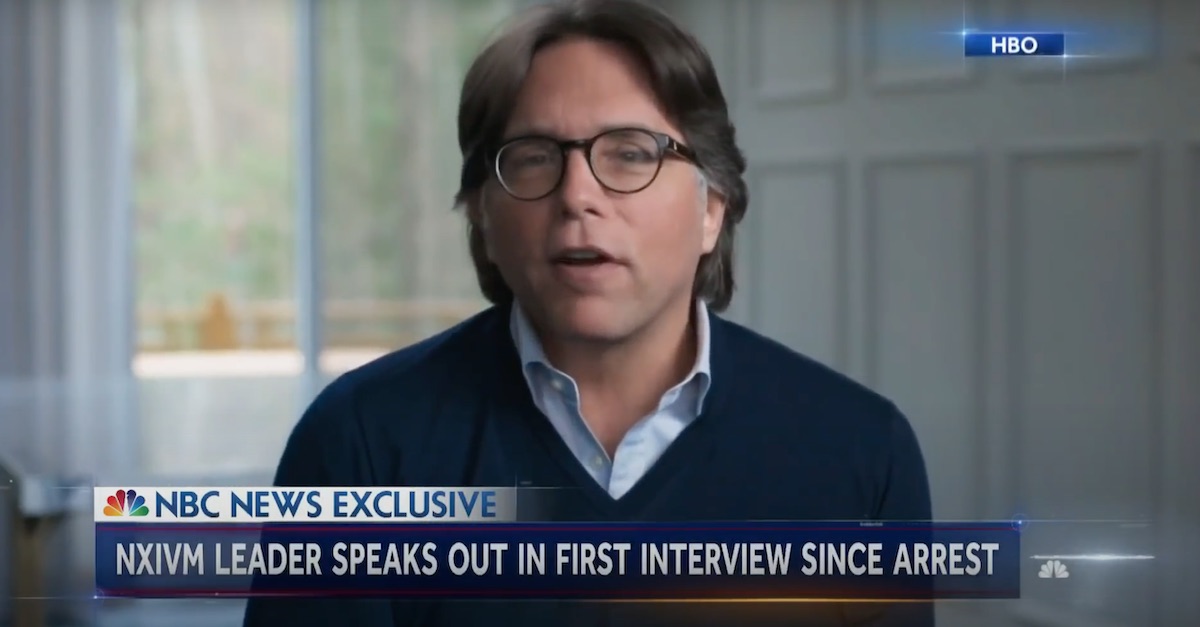 The leader of a New York-based sex cult called NXIVM (nex-ee-um), which branded itself as a self-help group for elites, was sentenced in the Eastern District of New York on Tuesday to life in prison. Through his defense lawyers, Keith Raniere, 60, maintained until the end that he is not sorry for his conduct because he will one day show that he is not a sex-trafficker, abuser of women, possessor of child pornography, racketeer, extortionist, identity thief or obstructionist.

The NXIVM founder—known as “Vanguard,” “Master,” and “Grandmaster“—was found guilty in June 2019 on all criminal charges against him. Raniere and elite co-defendants like Seagram’s heiress Clare Bronfman (a NXIVM bankroller) or Smallville actress Allison Mack (a top recruiter) are all being punished for their roles in the conspiracy.

Bronfman, Mack and others, unlike Raniere, entered guilty pleas and avoided sex crime charges; Bronfman was sentenced to nearly 7 years in prison, while Mack is still waiting to be sentenced. Raniere chose to fight the charges and lost. Now he’s been sentenced to 120 years in prison.

In one instance at trial, Judge Nicholas Garaufis erupted and yelled “You’re done” multiple times at Raniere’s defense lawyer Marc Agnifilo. It happened while government cooperator, Lauren Salzman, was being cross examined by Agnifilo. This prompted Agnifilo to file a motion for a mistrial. The judge rejected his argument.

Salzman, a former NXIVM member, recounted how she and Raniere were taking a nap at a Mexican villa when the feds showed up to arrest him. She said this happened just before a planned group oral sex session was to occur. Salzman pleaded guilty to conspiracy.

Her mother, Nancy Salzman, co-founded NXIVM. The elder Salzman, known as the “Prefect” of the group, also admitted to identity theft and using her position to alter records; she “edited [recordings] to remove sections [NXIVM] did not want to turn over” in a lawsuit. Kathy Russell, NXIVM’s bookkeeper, pleaded guilty to visa fraud.

At trial, documentary filmmaker and for NXIVM member Mark Vicente also alleged that there was a political component to the group. He alleged that the group tried to “curry favor” with politicians—including the Clintons—and funneled illegal donations to Hillary Clinton’s campaign in 2008 through Clare Bronfman.

Agnifilo argued at trial that Raniere may be seen as gross and “distasteful,” but not a criminal.

Prosecutors said that Raniere, a self-described self-help guru, started a secret society in his organization, and leveraged women into “master-slave” relationships; he and his cohorts collected dirt on victims in order to control them. The so-called slaves would become masters by getting their own slaves. This was a pyramid with Raniere at the top, authorities said.

Mack was accused of recruiting several women to be slaves in the organization; these women were allegedly forced to have sex with Raniere and perform labor under threat of extortion. Mack admitted to receiving “labor and services” from two alleged female slaves she oversaw on Raniere’s behalf. Additionally, Mack admitted to engaging in a conspiracy to commit the above federal crime. As mentioned, what Mack didn’t plead guilty to were the sex trafficking and sex trafficking conspiracy charges in the indictment. Like Mack, Bronfman didn’t plead guilty to sex offenses–a significant difference for sentencing purposes.

Raniere, on the other hand, faced life in prison. His lawyers argued that 15 years would be an appropriate sentence, while prosecutors pursued the maximum. Prosecutors said that sentencing should reflect the magnitude of Raniere’s crimes against women.

Several former members of NXIVM, including India Oxenberg (the daughter of Dynasty actress Catherine Oxenberg) came forward with stories of sexual initiation rituals and being forcibly branded with both Raniere’s and Mack’s initials while part of the latter’s “slave pod.” Docuseries like The Vow have shown the harm NXIVM, Raniere, and female co-conspirators caused to women who were in the group. Women repeated these horrors during victim impact statements on Tuesday.

More than a dozen victims of Keith Raniere slammed the #NXIVM leader at his sentencing as a manipulative and self-absorbed “monster,” “parasite” and psychological “terrorist” who sexually preyed upon a 15-year-old Mexican girl and tore her family apart. https://t.co/o9Yn6ZABaZ

Separately and ahead of sentencing, India Oxenberg attempted to explain why she was still involved in NXIVM even after Raniere’s arrest.

“It’s hard to explain, but they’re like invisible chains, I know that they’re not there, but you feel them and they’re there because of what you’ve been told about yourself,” she said.

Oxenberg hoped Raniere would get life in prison.

“I hope the judge gives him life in prison. I think he’s a dangerous man and that if he’s released, he will do exactly what he’s always done. And that puts me and other women and men at risk,” she said.

Raniere has insisted that he is “innocent” and that a there is a “horrible injustice here.” He still admitted, however, that he bears responsibility.

“I apologize for my participation in all of this pain and suffering,” Raniere said. “I’ve clearly participated. I’ve been the leader of the community.”

Raniere’s lawyers said that their client shouldn’t get life in prison because it’s not like anyone was shot or stabbed.

“No one was shot, stabbed, punched, kicked, slapped or even yelled at. Despite the sex offenses, there is no evidence that any woman ever told Keith Raniere that she did not want to kiss him, touch him, hold his hand or have sex with him,” they argued.

The defense lawyers also said Raniere’s claims of innocence shouldn’t be cited by prosecutors as proof of no remorse.

“He has acted precisely how an innocent man would act, shouting from every rooftop every waking hour that the system has wrongfully convicted him,” they added.