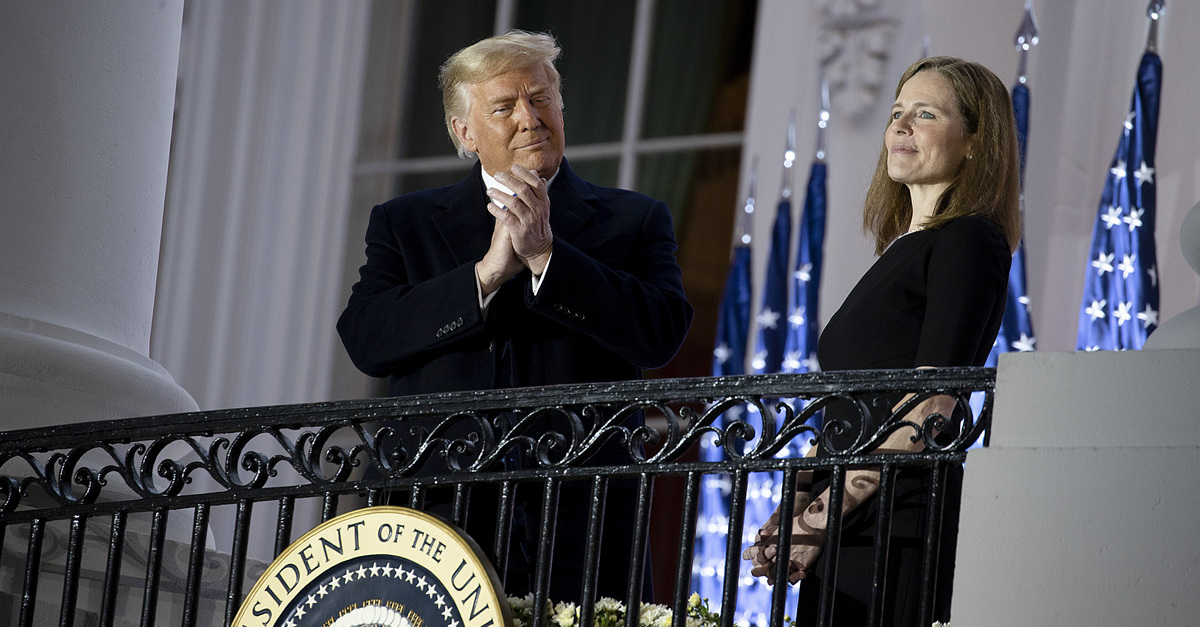 A local elections board in Pennsylvania filed a motion with the U.S. Supreme Court on Tuesday requesting that Justice Amy Coney Barrett recuse herself from a high-profile voting rights case that could have a major impact on the 2020 general election.

The filing focuses on “the circumstances of [Barrett’s] nomination and confirmation” to argue that her “impartiality might reasonably be questioned,” which is the federal statutory standard for judicial recusal. The Luzerne County Board of Elections also argues that the U.S. Constitution’s Due Process Clause “requires [Barrett’s] recusal under these same circumstances.”

Those circumstances are: (1) the swift nature in which the newest high court justice was nominated and confirmed; juxtaposed with (2) the basic issue of taking any action on the case itself–a question the Supreme Court already dispensed with earlier this month.

Recall: the Pennsylvania Supreme Court ruled in late September that local elections officials must accept ballots that are postmarked by November 3 so long as they arrive on November 6. If ballot envelopes lack a postmark, or if the postmark is illegible, election officials must accept such ballots ballots as valid unless a “preponderance of evidence” proves otherwise.

Republicans have vigorously mounted legal challenges to the lax interpretation of Pennsylvania’s ballot deadlines–but lost each go-round in the Keystone State. They eventually appealed directly to the Supreme Court to stay the state court’s mandate–but Chief Justice John Roberts sided with the court’s few remaining liberal members to deny that recent emergency application.

The four more conservative justices on the bench, however, indicated that they would have accepted the application. Supreme Court Rules for such an application require five justices to proceed–leaving the GOP one vote away from a decision that would have likely overturned Pennsylvania’s court-made deadline for returning mail-in ballots.

Last Friday, with Barrett’s by-then-assured Supreme Court confirmation just a matter of time, the state GOP tried their luck again by filing an expedited petition for a writ of certiorari in the case stylized as Republican Party of Pennsylvania v. Boockvar.

Legal experts presume that Barrett rounding out the court will provide the court’s more rigidly conservative wing with the extra vote necessary to erase that ballot deadline. Democrats presume as much as well and recently asked the court to keep its hands off Pennsylvania’s electoral system so close to the upcoming election.

“The nomination and confirmation of a Supreme Court justice this close to a presidential election is unprecedented,” the recusal motion notes. “As concerning as that is, what is even more troubling is the language President [Donald] Trump has used in consideration of this nomination, linking it directly to the electoral season at hand, with implications for his own re-election.”

As Law&Crime previously reported, Democrats have sounded the alarm for some time about Barrett’s objectivity, but those concerns ramped up substantially after Trump himself confirmed during the first presidential debate that he expected and hoped the end result of November’s contest would be decided by Barrett replacing late justice Ruth Bader Ginsburg on the court.

Luzerne County’s motion to recuse cites a case in which a West Virginia judge was allegedly bought off by a coal company just before he was scheduled to oversee the company’s appeal of a massive civil verdict against them. Notably, the judge did receive some $3 million in campaign contributions from the company’s chief executive.

Ultimately, the U.S. Supreme Court found that the judge’s refusal to recuse was a violation of the Fifth Amendment Due Process Clause due to a “serious risk of actual bias – based on objective and reasonable perceptions – when a person with a personal stake in a particular case had a significant and disproportionate influence in placing the judge on the case.”

Per the recusal motion [emphasis in original]:

What was most important in [the coal-judge case], and which is precisely relevant here, was the [Supreme] Court’s “conclu[sion] that there is a serious risk of actual bias – based on objective and reasonable perceptions – when a person with a personal stake in a particular case had a significant and disproportionate influence in placing the judge on the case…” Accordingly, applying these objective considerations to the question posed, the Court found the justice’s refusal to disqualify himself violated the Due Process Clause of the Fourteenth Amendment. U.S. Const. Amend. XIV…

The present circumstances mirror those in Caperton to such a significant degree that there can be little doubt about the Due Process implications of Justice Barrett’s participation in the consideration of this matter. “The temporal relationship between [President Trump’s nomination of Justice Barrett], the [J]ustice’s [confirmation] and the pendency of the [present] case [which is relevant to the President’s re-election campaign] is also critical.” President Trump’s statements quite clearly indicate that he wanted to “choose[] the judge in his own [electoral] cause,” which Justice Barrett’s confirmation only eight days before the election and in the midst of this election case (with presumably others to follow) accomplishes the President’s goal.

“It is of little importance what Justice Barrett’s own searing examination of her subjective views are or may be regarding any potential bias she may or may not harbor in considering this case,” the motion continues. “She has been placed in a position not of her own making but one in which disqualification is constitutionally mandated.”

The county also cites the long-established legal maxim that no one may be their own judge while adding that the Supreme Court’s precedent necessitates a caveat of sorts to that principle: “no one may choose their own judge.”

The filing stops just short of blaming Barrett herself.

“The present case is one of utmost important to the President’s re-election bid,” the motion notes. “Just as President Trump has placed Justice Barrett on the Supreme Court with whatever hope or expectation he may have, he has also imposed on her the duty to recuse herself in this case. Her integrity and the integrity of this Court cannot tolerate any other choice.”

Barrett Motion to Recuse by Law&Crime on Scribd

Editor’s note: this story has been amended post-publication for accuracy and for clarity. The original version of this story can be found here.