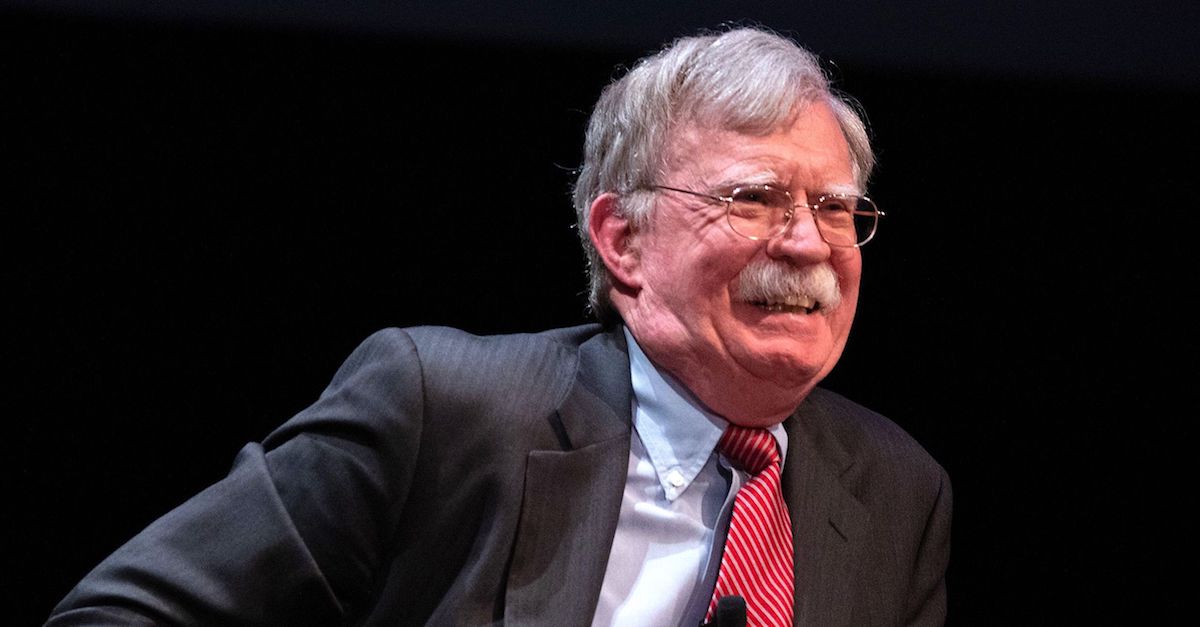 After resisting testifying during Trump’s first impeachment, Bolton said he would give the tell-all he refused to provide Congress in a book titled, “The Room Where It Happened,” depicting the 45th president as a man regularly seeking to do favors for “dictators he liked.” Trump’s Justice Department swung back hard, opening a criminal probe and filing a civil lawsuit seeking to recoup all of the book’s proceeds.

The government confirmed the lawsuit’s dismissal in a single-sentence stipulation entered into the court’s docket on Wednesday.

Bolton’s aide Sarah Tinsley confirmed that the developments, first reported by the New York Times, in a lengthy statement touting what she characterized as his “complete vindication.”

The Department is closing all aspects of the case, both the civil and grand jury proceedings.

These actions represent a complete vindication for Ambassador Bolton, and a repudiation of former President Trump’s attempt, under the pretext of protecting classified information, first to suppress the book’s publication and when that failed in court, to penalize the Ambassador. Trump openly admitted his desire to block publication of the book before the 2020 election for political reasons. He said, for example, “We’re going to try and block the publication of the book. After I leave office, he can do this. But not in the White House.”

Late last year, Bolton looked like he might have been in legal jeopardy after a federal judge refused to dismissed the Justice Department’s lawsuit in a ruling advancing the lawsuit and scathing remarks in a federal court hearing undermining his claims of political motivations.

Now, those problems appear to be over for Bolton. His lawyer Charles Cooper, of the firm Cooper & Kirk, added that the government dismissed the lawsuit “with prejudice,” never to be refiled.

“We argued from the outset that neither action was justifiable, because they were initiated only as a result of President Trump’s politically motivated order to prevent publication of the Ambassador’s book before the 2020 election,” Cooper said in a statement.

According to Cooper, the National Security Council’s senior official Ellen Knight “personally conducted a painstaking four-month prepublication review of Ambassador Bolton’s book and, after requiring a number of revisions, concluded that it contained no classified information.”

“When the Justice Department sought to block Ambassador Bolton from taking any discovery into evidence of unprecedented political interference in the prepublication review of his book, Ms. Knight’s attorney issued on her behalf an 18-page public letter detailing how ‘a designedly apolitical process had been commandeered by political appointees for a seemingly political purpose,'” Cooper added.

In September, Senior U.S. District Judge Royce Lamberth was not impressed with Knight’s allegations of politicization by Trump appointees.

“I think you’re wrong about reasonable people coming to the conclusion that that’s anything more than a political diatribe,” Judge Lamberth reportedly remarked at the time, shortly before denying Bolton’s motion to dismiss.

Attorney General Merrick Garland has come under heavy criticism recently for continuing some of the actions by his predecessor, including defending Trump from columnist E. Jean Carroll’s lawsuit and fighting to keep under wraps the memo that former Attorney General Bill Barr cited as justification for not charging the ex-president for obstruction.

In Bolton’s case, the Justice Department’s departure from the Barr era has been questioned by one top national-security lawyer, Mark Zaid.

Yet now decision is made to allow him to evade all liability.

I can't wait to raise this result for my other clients. https://t.co/9CbYToyHv6

“There were definitely problems w/how USG classified #Bolton’s book. But let’s be clear on facts & law: Bolton failed to secure proper prepub review approval. Yet now decision is made to allow him to evade all liability,” Zaid tweeted.

Zaid, who represented the Ukraine whistleblower whose claims sparked Trump’s first impeachment, elaborated on those remarks during a phone interview with Law&Crime.

“I am very much a law and order guy,” Zaid said. “I want rules to be followed, and this sends a very inconsistent message to federal, former and current federal employees and contractors as to what the current state of policy is with respect to prepublication review.”

Even assuming Bolton’s accusation of a Trump-era vendetta were true, Zaid noted that would not have ended the matter.

“If those decisions had been purely 100%, political, illegitimate, let’s even say illegal, it does not relieve Bolton of his lawful obligation to have submitted his manual script for pre-pub review and not to have published it before he received permission,” Zaid said. “His remedy was to have sued the U.S. government for the process, the way I do for dozens of clients. He doesn’t get to make the decision that he knows better, and he can just do what he wants. And even if he’s right, with respect to a politicization of his review process, it is still not his decision. He needed to have sued, and even would have had an awesome case to have exposed what the Trump administration was doing to him.”

“I would have represented in a heartbeat,” Zaid added.

Now criticizing Bolton instead, Zaid noted that the four-star general in charge of the National Security Agency said in a signed declaration a limited portion of the draft manuscript “implicated” TS/SCI, short for “Top Secret/Sensitive Compartmented Information.”