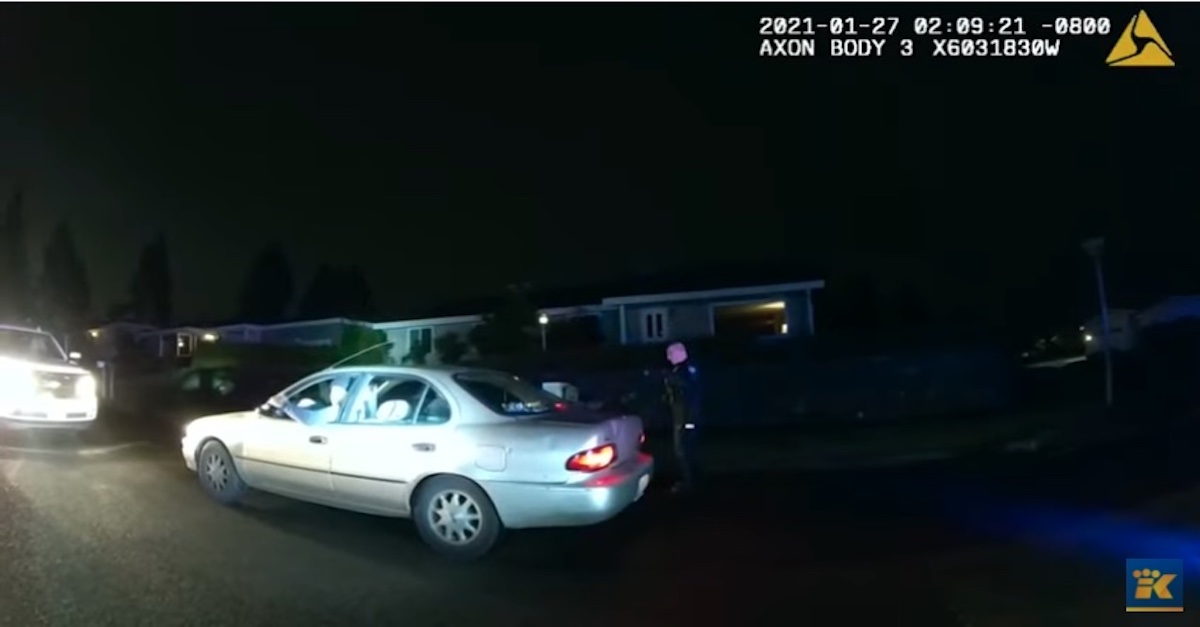 According to the filing, which is a precursor to a potential lawsuit, Altheimer has suffered “severe emotional distress” as a result of the confrontation, and that his constitutional rights were violated. According to his claim, Altheimer has witnesses “who will attest to the emotional distress caused by the racial profiling, false arrest, and unnecessary use of excessive force of this man whose only crime was ‘being a black [sic] man in a white [sic] neighborhood.”

Altheimer was delivering newspapers on his regular route in Tacoma when at around 2:00 a.m., he noticed he was being followed by an “unmarked, personal SUV,” the claim says. Altheimer said he stopped to ask why the driver, later identified as Pierce County Sheriff Ed Troyer, was following him.

According to a Seattle Times report, Troyer said he started following Altheimer because “he saw a driver he believed was behaving suspiciously in his neighborhood in Tacoma’s West End.”

Troyer didn’t identify himself as law enforcement, according to both the Seattle Times and the tort claim, and asked Altheimer what he was doing in the neighborhood. He “called me all types of names,” Altheimer claimed, and accused him of being a “porch pirate,” or someone who steals packages from porches, the Seattle Times reported.

Altheimer asked if he was being targeted as a Black man driving an older car, the Seattle Times said. Troyer allegedly “responded that he is not racist and said that his wife is Black,” according to the report.

Altheimer said he didn’t tell Troyer he was a newspaper carrier, because he felt it wasn’t his business. He also told Troyer that if he felt like he was in danger, he should call the police, to which Troyer reportedly responded: “Oh, I got four cars on the way,” according to the Seattle Times.

Audio of Troyer’s call to dispatch revealed that the sheriff claimed Altheimer “threatened to kill me.” He said that Altheimer “looked homeless in his car.”

When Troyer called 911, he apparently indicated at least four times that Altheimer had threatened to kill him. Troyer’s call was “dispatched at the highest priority and was broadcast to all law enforcement agencies in the South Sound, which resulted in more than 40 units from multiple agencies responding to the scene,” according to the tort claim.

Altheimer was then “confronted at gunpoint, removed from his vehicle, frisked for weapons, all while trying to explain that he was at work,” the claim says. Altheimer gave police permission to search his vehicle, which was filled with newspapers.

Meanwhile, when responding officers asked whether Troyer had been threatened, “as he had indicated four separate times, in his call to dispatchers,” Troyer told one of the officers that “Mr. Altheimer never threatened him and that he did not observe Mr. Altheimer with any weapons,” the complaint says. The police incident report also said that Troyer, when asked by an officer, confirmed that Altheimer never threatened him. In comments responding to a news story, Troyer attempted to walk that back.

Altheimer, 24, delivers papers six nights a week, according to the report. He has worked as a carrier at his current company since 2015, and “is considered a reliable and hard worker,” Altheimer’s claim says. “He is the primary support for his children and works hard to fulfill his obligations.”

Following the incident, which was first revealed by the Seattle Times months after it occurred, Troyer faced multiple investigations, including a criminal investigation requested by Gov. Jay Inslee.

An attorney for Altheimer didn’t immediately return Law&Crime’s request for comment. A Pierce County spokesperson told Law&Crime that they do not comment on pending legal matters.