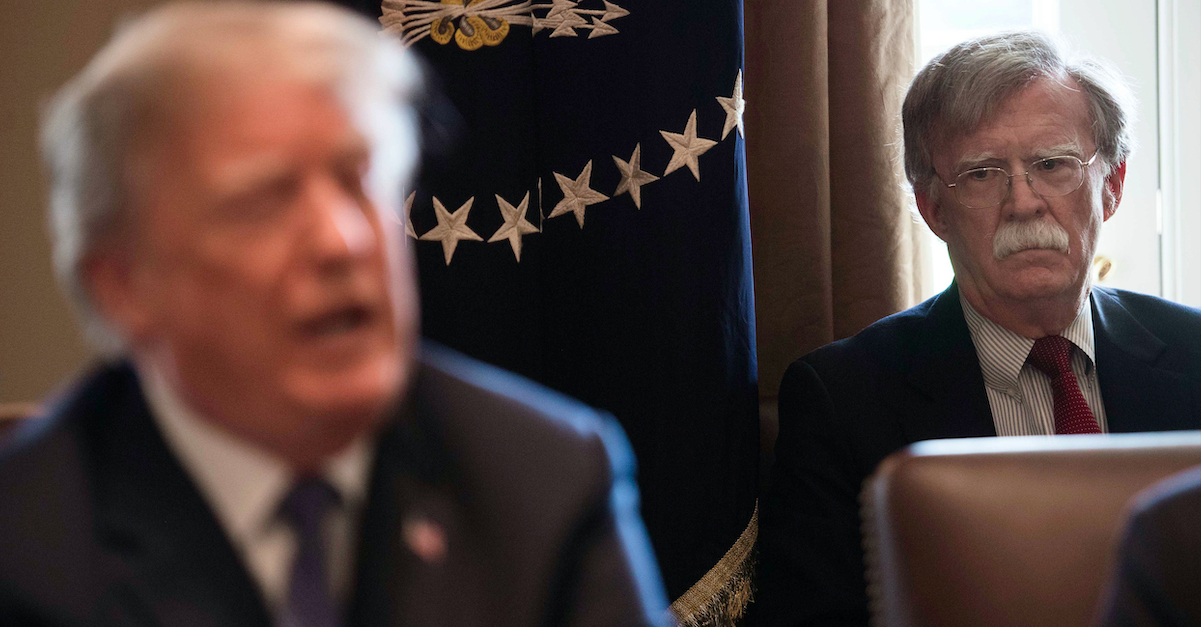 The United States government is suing former National Security Advisor John Bolton over an upcoming tell-all book entitled The Room Where It Happened: A White House Memoir.  The book is being touted as a chance for readers to go behind the scenes of the Donald Trump White House.

The government’s civil action, filed in federal court in the District of Columbia, accuses Bolton of “compromising national security by publishing a book containing classified information—in clear breach of agreements he signed as a condition of his employment and as a condition of gaining access to highly classified information and in clear breach of the trust placed within him by the United States Government.”

“Within two months of his departure from government service, Defendant had negotiated a book deal allegedly worth about $2 million and had drafted a 500-plus page manuscript rife with classified information, which he proposed to release to the world,” the lawsuit claims.

The government alleges three counts of breach of contract and fiduciary duty:  (1) for violating prepublication review requirements; (2) for violating a duty not to disseminate classified information; and (3) for unjust enrichment.  On the latter point, the government is seeking a constructive trust to retain profits from the book if it is published without a full review by the White House.

The lawsuit asks a judge to order Bolton “to further delay the release date of The Room Where it Happened until completion of the prepublication review process; and to instruct or request his publisher, insofar as he has the authority to do so, to take any and all available steps to retrieve and dispose of any copies of The Room Where it Happened that may be in the possession of any third party in a manner acceptable to the United States.”  The government claims it “is not seeking to censor any legitimate aspect of Defendant’s manuscript; it merely seeks an order requiring Defendant to complete the prepublication review process and to take all steps necessary to ensure that only a manuscript that has been officially authorized through that process—and is thus free of classified information—is disseminated publicly.”

The documents allege Bolton at first complied with prepublication review requirements, but then forged ahead on his own when he “apparently became dissatisfied at the pace of [the National Security Council’s] review.”

Bolton is the only named defendant; his publisher is not named.  The only named plaintiff is the United States government.

Following the 27-page lawsuit are dozens of pages of exhibits.  They include Bolton’s contracts, legal notices about his post-employment obligations, and news reports about the promised release of Bolton’s book.  Also included are months of communications among Bolton, his attorneys, and the White House.

The letters begin from Bolton’s attorney, Charles J. Cooper, to Ellen J. Knight, of the Executive Office of the President, with a request for a legally required prepublication review.  In the letter, Cooper says “Bolton has carefully sought to avoid any discussion in the manuscript of sensitive . . . or other classified information, and we accordingly do not believe that prepublication review is required.” The letter says Bolton was “nonetheless submitting” his “manuscript out of an abundance of caution.”

The letter also says Knight, of the White House, indicated the prepublication review would be for national security rather than political purposes.  “In keeping with that purpose, it is our understanding that the process of reviewing submitted materials is restricted to those career government officials and employees regularly charged with responsibility for such reviews,” Cooper wrote.  “Accordingly, we understand that the contents of Ambassador Bolton’s manuscript will not be reviewed by or otherwise disclosed to any persons not regularly involved in that process.”

“Ambassador Bolton is relying specifically on this understanding of the prepublication review process in submitting his manuscript for such review,” the letter says.

The Dec. 30, 2019 letter suggests that a 30-day review period was expected; it further notes that the manuscript was “highly time sensitive.”

A Jan. 23, 2020 reply from Knight to Cooper said a “preliminary review” indicated that Bolton’s “manuscript appears to contain significant amounts of classified information.”

According to other exhibits, four days later, on Jan. 27, the Washington Post published news that part of the Bolton transcript had been leaked and that congressional Democrats wanted Bolton to testify at Trump’s impeachment hearing.

What followed were a back-and-forth series of letters between Knight and Cooper through January and February.  One, dated Feb. 24, suggested that Bolton might be able to make edits to his manuscript in a “secure facility.”

A March 27 email from Knight directly to Bolton said “many” of his changes were “satisfactory” but that “additional edits [we]re required to ensure the protection of national security information.” Knight said she would “provide a list of required edits and language substitutions” but would still have to check the final copy before Bolton submitted it to a publisher. “[Y]ou are not authorized to publish or further disseminate the manuscript or its contents until expressly given clearance by me to do so,” Knight wrote.

A May 7 response from Knight to Bolton said “the [review] process remains ongoing.”

Things went downhill from there.

A June 10 letter from Cooper to from John A. Eisenberg, Assistant to the President, Deputy Counsel to the President, and Legal Advisor to the National Security Council accused the White House of stalling the book due to Trump’s impeachment proceedings. It further claimed Knight told Bolton there were “no remaining issues” with the manuscript (those are Cooper’s words paraphrasing Knight’s statements).  “It is readily apparent that the White House seeks to block publication of Ambassador Bolton’s book for purely political reasons, in violation of the First and Fifth Amendments” and “the covenant of good faith and fair dealing implicit in . . . nondisclosure agreements,” the letter charged.

In language best described as Trumpian in attitude, Eisenberg replied June 11 and accused Bolton of acting “in brazen disregard” of his legal obligations by sending the manuscript for publication by that time, that the 30-day review window previously contemplated by Bolton was “absurd,” and that Bolton had taken classified information “and sold it ot the highest bidder.”  The bombastic letter included further complaints that Bolton’s rush to publish was both “self-serving” and “offensive.” It stated that “[t]he NSC’s sole interest in this matter is to protect the national security of the United States,” not to protect the president politically.

Editor’s note:  this report began as a breaking news piece; it has been updated multiple times.