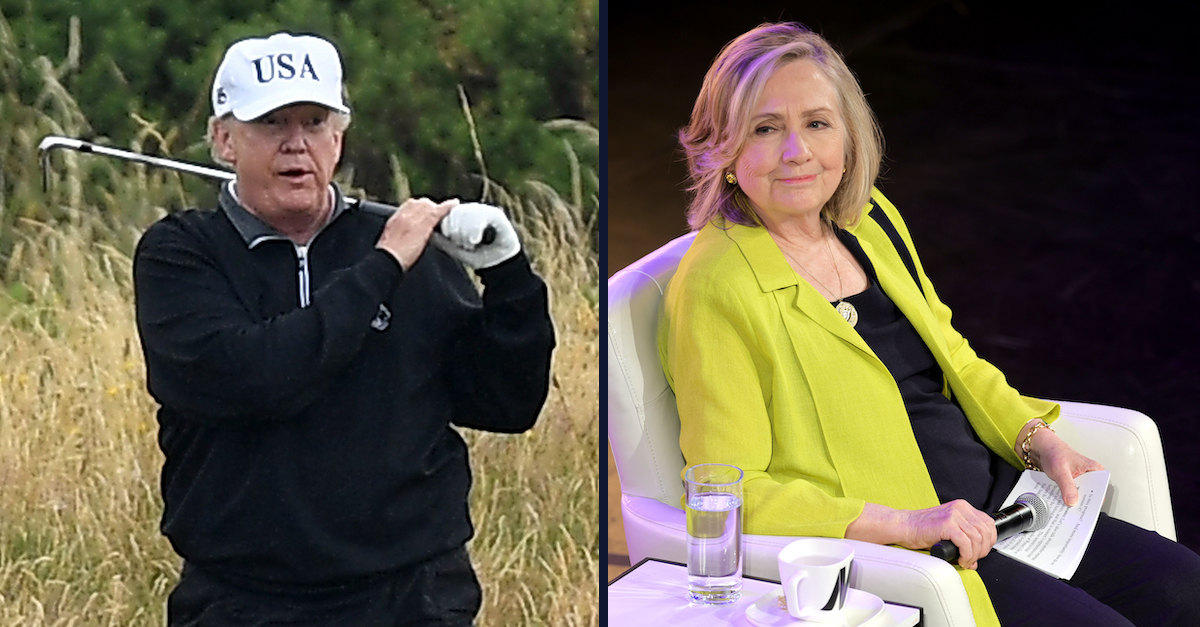 Then-U.S. President Donald Trump was photographed golfing on July 15, 2018 in Turnberry, Scotland, after meeting with the Prime Minister and the Queen. Hillary Clinton took part in a panel discussion during BroadwayCon 2022 at The Manhattan Center on July 8, 2022 in New York City. (Photo of Trump by Leon Neal/Getty Images; photo of Clinton by Michael Loccisano/Getty Images.)

A Florida federal judge has ordered Donald Trump‘s lawyers to pay nearly $1 million in sanctions for filing a lawsuit that was nothing more than “a deliberate attempt to harass” his one-time political rival Hillary Clinton and a host of Democratic notables.

“This lawsuit should have never been brought,” U.S. District Judge Donald M. Middlebrooks wrote at the start of his scathing, 46-page ruling in the former president’s lawsuit. Trump sued Clinton, the Democratic National Committee, Rep. Debbie Wasserman Schultz (D-Fla.), former FBI Director James Comey, former deputy FBI director Andrew McCabe, and several other major players in the Democratic party in March of 2022, alleging a sprawling RICO scheme in which they targeted then-candidate Trump, who would eventually go on to win the 2016 presidential election.

Middlebrooks, a Bill Clinton appointee, dismissed the case in September.

In Thursday’s ruling, Middlebrooks paints Trump as a conniving and clever litigant trying to use the legal system for his own corrupt ends.

“Mr. Trump is a prolific and sophisticated litigant who is repeatedly using the courts to seek revenge on political adversaries,” Middlebrooks wrote. “He is the mastermind of strategic abuse of the judicial process, and he cannot be seen as a litigant blindly following the advice of a lawyer. He knew full well the impact of his actions.”

Calling the complaint a “shotgun pleading,” Middlebrooks said that Trump and his legal team deployed “abusive litigation tactics” that were “drafted to advance a political narrative[,] not to address legal harm caused by any Defendant.”

“The Amended Complaint is a hodgepodge of disconnected, often immaterial events, followed by an implausible conclusion,” Middlebrooks said in his ruling. “This is a deliberate attempt to harass; to tell a story without regard to facts.”

The filing was accompanied by an appendix that specified how much of the $937,989.39 in sanctions should go to each party. The largest amount — nearly $180,000 — went to the DNC and Rep. Schultz, and Clinton was awarded the most to a single defendant, with around $172,000.

In a footnote, Middlebrooks seemed to anticipate a potential claim that Trump and his lawyers couldn’t afford to pay it, and said that he would pause enforcement of his order if the former president provided proof.

“I believe the monetary sanctions imposed here are well within Plaintiff and Plaintiff’s lawyer ability to pay, and therefore I have not thought it necessary to conduct an intrusive inquiry into their finances,” Middlebrooks wrote (citations omitted). “However, should Plaintiff or Plaintiff’s lawyer (and law firm) believe that the amount would seriously jeopardize their financial status, that individual or firm should file within ten (10) days of this Order, under seal, a verified statement of net worth which includes assets and liabilities. In the event of such a filing, the obligation of that individual or law firm will be tolled until further order of the Court.”

Middlebrooks had previously issued a sanctions order for around $65,000 against Trump’s legal team for roping Charles Dolan — a Virginia resident who spent a week knocking on doors for Clinton shortly before the 2016 election — into the case.

Read the sanctions order below. Read the appendix, which breaks down the amounts owed to each defendant, here.