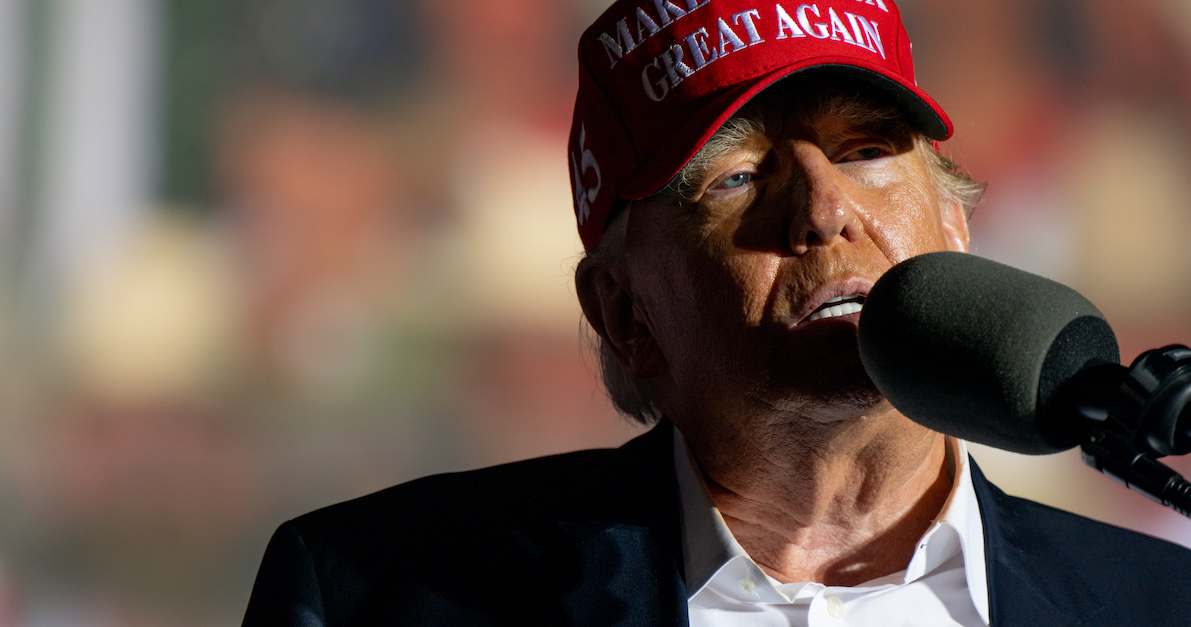 The case was pending before the same federal judge who sanctioned Trump and his lawyer Alina Habba nearly $1 million on Thursday evening, citing a pattern of “frivolous” and “vexatious” litigation.

“This lawsuit should have never been brought,” U.S. District Judge Donald M. Middlebrooks wrote in that lacerating sanctions order.

Spanning 46 pages, the order cited Trump’s “continuing pattern of misuse of the courts,” in a propensity that “undermines the rule of law, portrays judges as partisans, and diverts resources from those who have suffered actual legal harm.”

The lawsuit that Trump withdrew on Friday was one of several lawsuits that Middlebrooks cited to illustrate such a pattern. Middlebrooks, a Bill Clinton appointee, presides over that case and recently denied Trump’s request to intrude on James’s enforcement action in New York.

“The Trump Organization has already been found guilty by a New-York jury of several counts of tax fraud,” Middlebrooks noted in that December 2022 order. “To now impede a civil Enforcement Action by the New York Attorney General would be unprecedented and contrary to the interests of the people of New York.”

In September, James sued Trump, his family members and his business empire for fraud, in a $250 million civil lawsuit that ran in parallel with criminal charges against the company. The possible penalties for the Trump Organization can be even more dire than the criminal charges, which capped off at a $1.6 million fine.

The attorney general wants to bar the former president and his adult children Eric Trump, Donald Trump Jr., and Ivanka Trump “permanently” from serving as an officer and director of a New York corporation.

Trump’s Florida lawsuit sought to collaterally attack that case, which he depicted as a political vendetta by a Democratic elected prosecutor.

“James’ war of intimidation and harassment on President Trump, his family, his business interests, and his associates is longstanding and continuing,” Trump claimed in the since-withdrawn lawsuit. “James campaigned for Attorney General on the promise of launching investigations of President Trump before even the pretext of a predicate existed. Since her election, she made good on those campaign promises and established within her office a policy of intimidating and harassing President Trump whenever possible.”

In his recent sanctions order, Middlebrooks explained why he rejected the relief Trump had been seeking.

“I found that Plaintiff’s attempt to sidestep rulings by the New York courts by suing AG James individually rather than in her official capacity was plainly frivolous,” the judge wrote. “I found there was no likelihood of success on the merits, no irreparable harm, and to ‘impede a civil Enforcement Action by the New York Attorney General would be unprecedented and contrary to the interests of the people of New York.’ […] I urged Mr. Trump and his lawyers to reconsider their opposition to AG James’s Motion to Dismiss because ‘[t]his litigation has all the telltale signs of being both vexatious and frivolous.'”

Trump’s notice of voluntarily dismissal seeks to withdraw the lawsuit “without prejudice,” meaning that it could be refiled. The former president’s response to the attorney general’s motion to dismiss was due today.

The notice of withdrawal was signed by attorney R. Quincy Bird.

Update on Jan. 20, 2023, at 12:38 p.m. ET: This story has been updated to include more details about the events that preceded Trump’s withdrawal of the lawsuit.