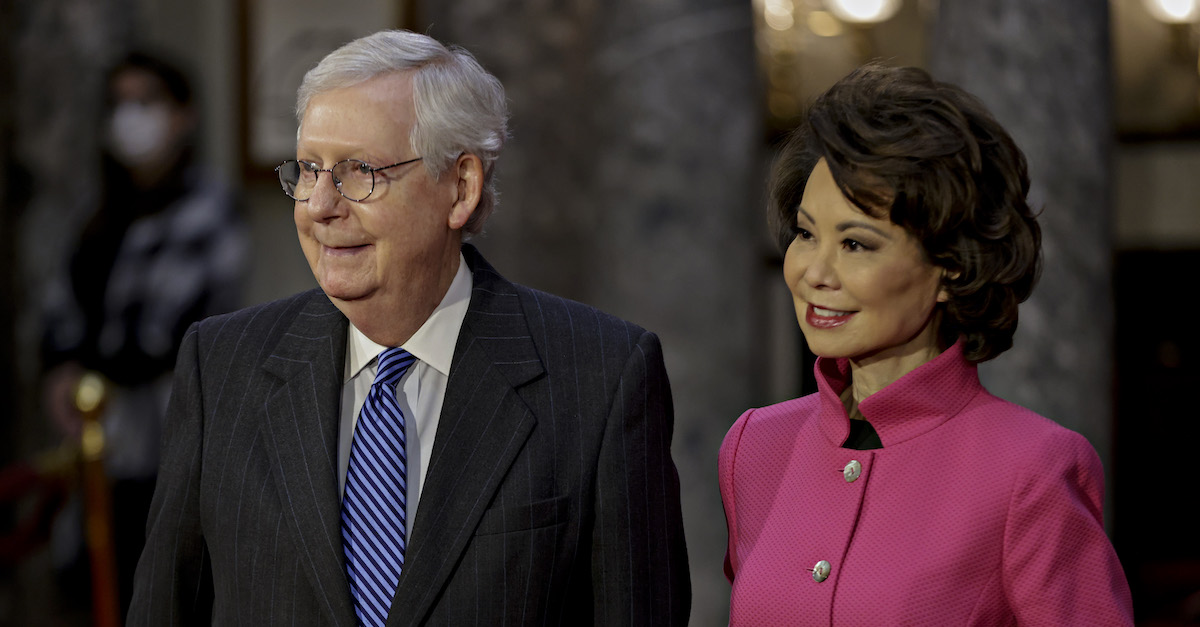 Senate Majority Leader Mitch McConnell (R-Ky.) waits to be sworn-in with his wife Elaine Chao, U.S. Secretary of Transportation, at the U.S. Capitol on January 3, 2021 in Washington, D.C.

A Wednesday Inspector General’s report accuses former Secretary of Transportation Elaine Chao of “misuses” of her official position to help her family and her family’s business and charitable interests. But the multi-pronged review also found no “irregularities” with the way Chao’s agency divvied up federal grant money and said Chao’s ownership of stock in a company which received federal grants did not appear to violate ethics laws.

Chao, who held the relevant cabinet position during the presidency of Donald Trump, was also Secretary of Labor during the administration of George W. Bush and Director of the Peace Corps under George H.W. Bush. She is the wife of Senator Mitch McConnell of Kentucky. Chao’s relationship with McConnell gave rise to questions about whether she was unfairly favoring Kentucky over other states in federal grants.

The IG’s report is addressed to Rep. Peter DeFazio, an Oregon Democrat who is chairman of the House Committee on Transportation and Infrastructure.

The review found no “factual basis” for investigating whether Chao awarded federal grants to benefit Kentucky, the state her husband represents in the Senate. It also found there was “not a sufficient basis” to launch “a formal investigation into grant awards or the Secretary’s financial interest in Vulcan Materials.”

“We cannot make any conclusions based on Secretary Chao’s percentage of meetings with Kentucky officials out of all of her meetings with State and local officials,” the report says. Later, it says an analysis of federal grants “found that Kentucky did not receive a disproportionate amount of DOT grant funds as a whole.” The review, which stretched back to 2014, did not find an uptick in transportation grants to Kentucky after Trump tapped Chao to lead the agency in 2017.

The review did cite a Government Accountability Office report which suggested the DOT could “improve its transparency regarding discretionary grant decisions.” But the concerns were not strong enough to require further inquiry.

Todd Inman, Chao’s Chief of Staff, “denied being an ‘intermediary’ for Kentucky officials and stated he was not involved in grantee selection.”

“He [Inman] told us that several individuals whom he knew personally from Kentucky had contacted him, but that he gave Kentucky officials the same advice about the grant process that he would give anyone who had asked,” the IG’s report says.

The 44-page document continues by saying that a review of Chao’s ownership of stock in Vulcan Materials, “a large stone and asphalt producer that has received Federal grant funds . . . did not identify any evidence of a financial conflict of interest.”

“We found no evidence that the Secretary participated in any particular matter pertaining to Vulcan Materials in violation of the main financial conflict of interest law, 18 U.S.C. § 208,” the document concludes.

However, a “preliminary review revealed other potential misuses of position that warranted additional review.” A formal investigation followed.

The IG “referred its findings to the U.S. Attorney’s Office for the District of Columbia on December 16, 2020, and the U.S. Department of Justice Public Integrity Section on December 17, 2020, both of which declined prosecution” during the waning days of the Trump administration.

First, it says Chao’s office tasked “political appointees to contact the Department of Homeland Security (DHS) about the status of a work permit application submitted by a foreign student studying at a U.S. university who was a recipient of Chao family philanthropy.” A chain of emails indicates that Chao’s staff greased the rails to ensure the student was able to remain in the U.S. One of the emails, which was edited for inclusion in the report, was sent by a Chao staffer to “two DHS officials” to ask if “a political at DHS that handles” immigration matters:

Just tried to call you. I now understand more about the problem. It’s not crazy sensitive, but it is for the Secretary. There is [an individual] who is a [] School Scholar and a recipient of Chao Family [philanthropy]. [They are] caught in a hard place with [their] student visa about to expire and [their] Employment Authorization Document [EAD] yet to be approved. [They] already [have] a job lined up, [so they] just [need] this to go through the system.

Secretary just asked about this again. Is there anything more I can tell her about the process, or anything that can help gauge expectations?

Chao herself then asked another staffer, Undersecretary of Transportation for Policy Derek Kan, how the process was proceeding:

That other staffer replied:

Both of us have been keeping [the fellow] in the loop. On average, these applications take 90 days to resolve and [the fellow is] in the queue. [They] actually applied somewhat late and is aware [they] could have applied earlier to avoid this situation.

We’ve asked DHS that her file be reviewed, which often accelerates the process. As soon as I get any meaningful info, I’ll let you know.

Fulton told investigators he “did not recall another instance when a DOT employee had asked him to inquire about the immigration status of an individual.”

The report’s second area of concern says Chao “includ[ed] family members and personal events in the Secretary’s planned, but subsequently cancelled, trip to China in November 2017.”

“DOT emails indicate that [Chao] directed her staff to include her relatives in both the planning of the 2017 trip to China and participation in the official events and high-level meetings during the trip,” the report explains. It says ethics attorneys “expressed concern” about certain events on the itinerary “due to an apparent connection with” groups controlled by Chao’s relatives. It then raises concerns about public relations coordination between “the U.S. Embassy press office and Chinese media outlets to arrange media coverage emphasizing the Secretary’s personal and family story.”

The IG’s investigators uncovered several warnings against such actions, including a memo which “stated that it would be inappropriate for the Secretary to use her official position to provide her family members access not afforded to a private citizen.”

The planned trip was eventually cancelled.

The report’s third area of concern is that Chao’s office “provid[ed] DOT Public Affairs and media support to [Chao’s] father.” For instance, staffers “were directed to help promote” a biography written by Chao’s father. Staffers also “actively maintained a list” of awards Chao’s father had won.

The Inspector General’s Office “also found evidence that the former DOT Director of Public Affairs, Marianne McInerney, and OST staffers also drafted, edited, and implemented a media strategy and public relations plan” regarding Chao’s father. “The employees who worked on this document were no longer employed by DOT during the investigation and would not consent to a voluntary interview.”

More than a dozen subsequent pages lay out the specifics.

Fourth, and finally, the report says “DOT resources and OST staff” were used “for tasks for the Secretary that appear to be personal in nature.”

Examples include staffers calling a store to inquire about repairs on an item, shipping a parcel, setting up appointments, and other tasks — some of which were connected to her father and to her family’s business interests.

“A review of Department emails also revealed several instances where the Secretary directed her staff to research and/or purchase personal items for her online, to include searching for free shipping and coupon codes. These purchases were paid for using the Secretary’s personal credit card,” the report says. However, per the report:

In interviews with OIG investigators, one OST staffer explained that there are no “off hours” and that the Secretary works quite a lot. When asked about running personal errands for the Secretary, a different OST staffer acknowledged that sometimes it was easier for the staffer to go to a store for an item because if the Secretary went herself it would have required [redacted law enforcement information] as well as an advance vehicle. The staffer added that this practice also helped keep the Secretary on time and avoid interruptions to the schedule.

The above matters, when given to the Department of Justice, resulted in little more than a “lack of prosecutorial interest,” the report says.  The matters are now in the hands of the Department of Transportation’s Office of General Counsel “for action it deems appropriate.”

Chao told then-President Trump on Jan. 7 that she would resign effective Jan. 11.

“I had planned on serving through the end of your term in office, but after yesterday’s events at the U.S. Capitol, I will resign as U.S. Secretary of Transportation, effective Monday, January 11, 2021, to provide a short period of transition,” she wrote.