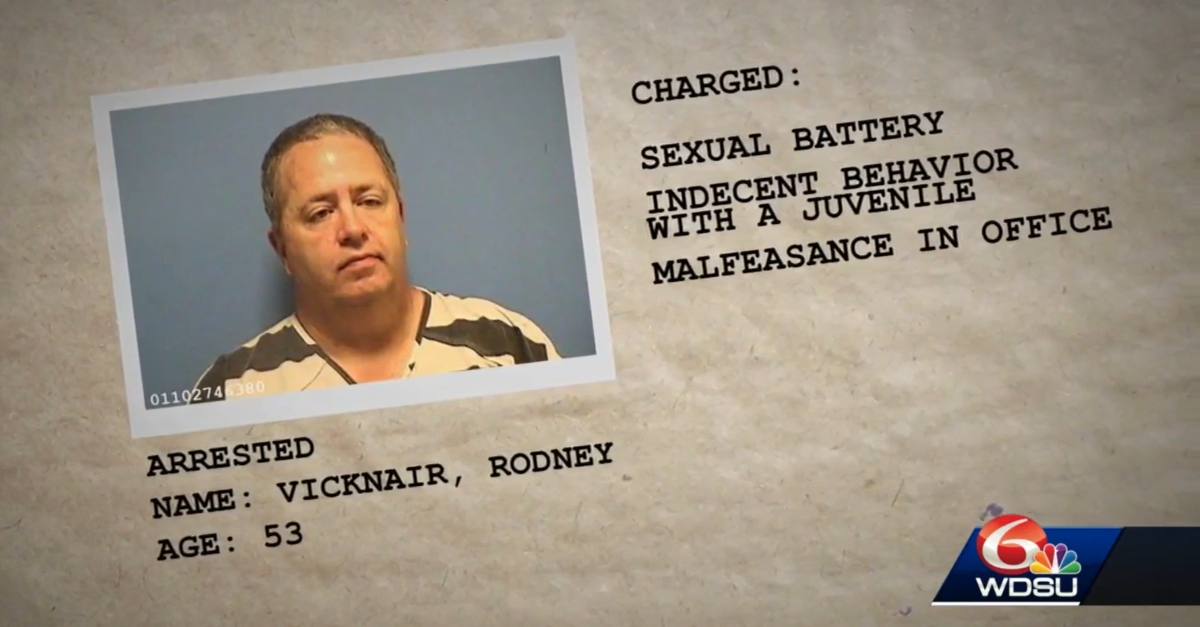 Rodney Vicknair, the fired New Orleans police officer charged in Sept. 2020 with sexually abusing a girl he originally brought to a hospital for a rape kit, was sued back on Feb. 24 for the same claim.

Plaintiff Rayne Upton, filing on behalf of daughter G.H., is going after the 54-year-old Vicknair, and others. Defendants include the city, Police Superintendent Shaun Ferguson, and other officers, the latter of whom are accused of witnessing Vicknair’s behavior toward the child.

Judging by the lawsuit, the lead defendant had a history of using his job to prey on women. He was suspended five days for a 2009 incident in which he took down a woman’s license plate number at at a grocery store parking lot in order to look up her personal information—so he could call her by her name over to his vehicle. Indeed, this complaint notes a WDSU report that Vicknair was disciplined for this, and three other incidents in his career. The new lawsuit also asserted that, based “on information and belief,” the officer made a large number of traffic and pedestrian stops in a bid to pick up women.

It’s amid this backdrop that Vicknair was dispatched in the case of rape survivor G.H. He took her to Children’s Hospital. The complaint states Vicknair should not have been been there in the first place, at least without specially trained victim advocates or detectives there, too.

The misconduct described above was caused by the policies, practices, and customs of Defendants, because their employees and agents, who are not part of a trained Sexual Assault or Child Abuse Response Team, regularly respond to the scene of child abuse or sexual assaults cases and interact with no trained victim advocates or detectives present.

Thus began what the complaint described as months of grooming. In the emergency room, Vicknair allegedly showed the 14-year-old pictures of a girl he claimed was his 16-year-old daughter. This other girl was wearing bikinis, lingerie, and held a cloth over herself. The officer asserted that his daughter was a model.

From there, Vicknair allegedly inserted himself into the child’s life, presenting herself as a “mentor,” and using his status as an officer. He’d call or text her almost every day, and often invited himself to her home.

The lawsuit described sinister interactions in which Vicknair encouraged the girl to “roughhouse” with him. This involved him striking her in the arm with a baton, and twisting her arm until she was in pain. He allegedly professed to easily commit acts of violence, including breaking people’s necks. He joked about how he would kill her loved ones.

Acts of disturbing behavior included groping her on multiple occasions, and using his patrol car to spy on her.

“Nice ass!” he allegedly said in one incident.

Vicknair raped her twice in his patrol car using his fingers, according to the complaint. He faces charges including sexual battery, not rape, but the complaint used the word rape, and took issue with the state’s definition of the crime:

In 2015, Louisiana lawmakers changed the name of Aggravated Rape, Forcible Rape and Simple Rape to First Degree Rape, Second Degree Rape and Third Degree Rape, respectively. These varying “degrees” of rape all require “sexual intercourse” that is or is deemed to be “without the lawful consent of the victim.” This archaic definition does not reflect rape as a crime against bodily integrity – it reflects a culture that blames survivors for the crimes that are committed against them and finds any excuse to be lenient with rapists.

The complaint states that police were well aware of his inappropriate behavior before the second rape.

98. Days before the second rape occurred, the Office of the Independent Police Monitor (OIPM) was alerted that Officer Vicknair’s conduct toward G.H. was inappropriate. OIPM notified NOPD and NOPD investigated.

99. During and after this investigation, Officer Vicknair remained on the streets and had the opportunity to rape G.H. a second time.

When he was arrested, he allegedly had the child’s underwear. The girl was, in the complaint’s words, “14 or 15” when the abuse occurred.

Federal records do not name an attorney for Vicknair in the lawsuit. The New Orleans City Attorney’s Office did not immediately respond to a Law&Crime request for comment.

“I think it helps that we’re doing so much community policing – we’re getting out more and talking with people,” Vicknair said when the department did a profile on him in 2017. “If I stop at a neighborhood store to buy something to drink and I see someone walking up to the door I will hold the door for them and say “Hi how are you doing today?’ They may not respond but I don’t take it personally. They might be having a bad day or maybe a police officer just arrested their son. It doesn’t matter. I can still talk to them, it’s just common courtesy. And if they see me doing that enough then maybe they’ll realize ‘Oh he’s just being polite,’ and maybe they’ll have a different perspective about us.”

Lawsuit Against Rodney Vick… by Law&Crime