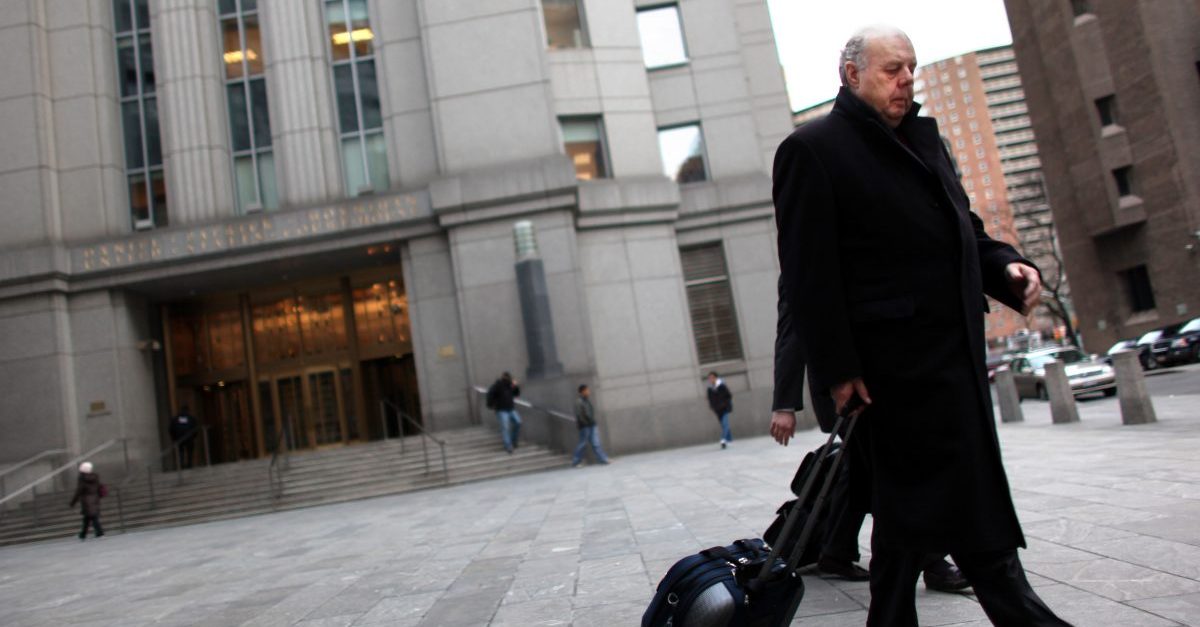 President Donald Trump responded on Thursday to his former Secretary of Defense’s rebuke by tweeting a letter from his former lawyer. The letter said that the protestors who were driven out of Lafayette Square days ago were “terrorists” and “not real.”

The president said that he thought this letter from “respected retired Marine and Super Star lawyer” John Dowd to retired Marine Corps Gen. James Mattis “would be of interest to the American People.”

This is what Dowd said:

I slept on your statement and woke up appalled and upset. You lost me. Never dreamed you would let a bunch of hack politicians use your good name and reputation—earned with the blood and guts of young Marines. You did what you said you would—engage in this discourse. Marines keep their word.

The phony protesters near Lafayette park were not peaceful and are not real. They are terrorists using idle hate filled students to burn and destroy. They were abusing and disrespecting the police when the police were preparing the area for the 1900 curfew. Jim, this is the new nihilism. See Dan Henninger in WSJ today. Marines support the police in harms way.

Did you forget that President Bush used active duty Marines to quell the riots in LA? President Trump has countless cities and some snowflake governors and mayors wetting themselves in the use fo force to protect innocent lives and property. The AG of Massachusetts thinks burning property is good protest. Three more policemen were stabbed and shot in NYC last night.

Think about it. Should he be upset about the obvious failure of leadership? Where are you Jim?

Marines go to the fight.

No one divided this country more than Obama. He abandoned our black brothers and sisters. He gave guns to the cartels. He apologized for our precious sacrifice and generosity overseas.

President Trump has done more to help our minority brothers and sisters in the three years than anyone in the last fifty. Ask the black pastors. Ask the leaders of the black colleges and universities. He got them funded. Ask them about the prison reform which ended the draconian sentences imposed on young black men by the laws enacted by Biden and his hacks. You need to bone up on your homework and stop listening to Uncle Leon.

I understand, you had to stick to the assigned narrative which did not include three years of corrupt investigations and evidence to destroy this President, his office, and his lawful free election. Nancy has no tolerance for dissent in the ranks—including those with stars.

Maybe, your problem, is a lot deeper. Perhaps you ought to explain how and why you (and John Allen), as CG Central Command, did not engage and take out Iranian Major General Soleimani who roamed the Middle East and wreaked havoc and death of American boys with his infamous IEDs?

Why did it take President Trump to have the instinct and balls to take him out (of course over the objection the geniuses in the Pentagon)?

Looks like the Persian mullahs were a one horse sleigh and Trump nailed the horse….forever. It has been quiet ever since. Perhaps, your anger is borne of embarrassment for your own failure as the leader of Central command. Did you applaud when the President recognized the central problem in the middle east? Did you applaud the President when he wanted to save American lives by bringing them home in one piece?

On Wednesday, Mattis wrote a lengthy statement that was published in The Atlantic. He said never thought he’d see the day where American troops would be ordered to violate the constitutional rights of fellow Americans. He was referring to the use of military police, mounted police and tear gas to clear out Americans who had gathered en masse in Lafayette Square to protest systemic racism, the horrific killing of George Floyd and police brutality. Minutes later, President Trump an entourage full of cabinet members and advisors walked across the street from the White House to St. John’s Church, where a photo op with a Bible took place.

“When I joined the military, some 50 years ago, I swore an oath to support and defend the Constitution. Never did I dream that troops taking that same oath would be ordered under any circumstance to violate the Constitutional rights of their fellow citizens—much less to provide a bizarre photo op for the elected commander-in-chief, with military leadership standing alongside,” Mattis wrote, before condemning President Trump’s threat to invoke the Insurrection Act absent a request from state governors.

“We must reject any thinking of our cities as a ‘battlespace’ that our uniformed military is called upon to ‘dominate, At home, we should use our military only when requested to do so, on very rare occasions, by state governors. Militarizing our response, as we witnessed in Washington, D.C., sets up a conflict—a false conflict—between the military and civilian society,” Mattis said.

Mattis said that President Trump is deliberately trying to divide the country and has made a “mockery of our Constitution.”

“We know that we are better than the abuse of executive authority that we witnessed in Lafayette Park. We must reject and hold accountable those in office who would make a mockery of our Constitution,” he said, concluding that America is no longer admired at home or abroad.

President Trump said on Wednesday night that he and Barack Obama both had the “honor of firing Jim Mattis.”

…His primary strength was not military, but rather personal public relations. I gave him a new life, things to do, and battles to win, but he seldom “brought home the bacon”. I didn’t like his “leadership” style or much else about him, and many others agree. Glad he is gone!

Breaking via WaPo: Trump's ex-chief of staff John Kelly defends Jim Mattis.
⁰"The president did not fire him. He did not ask for his resignation," Kelly said. "The president has clearly forgotten how it actually happened or is confused." https://t.co/rR2o47dBap