Hmmm, President Trump’s Pardons Sure Do Overlap a Lot with Associates Facing Charges 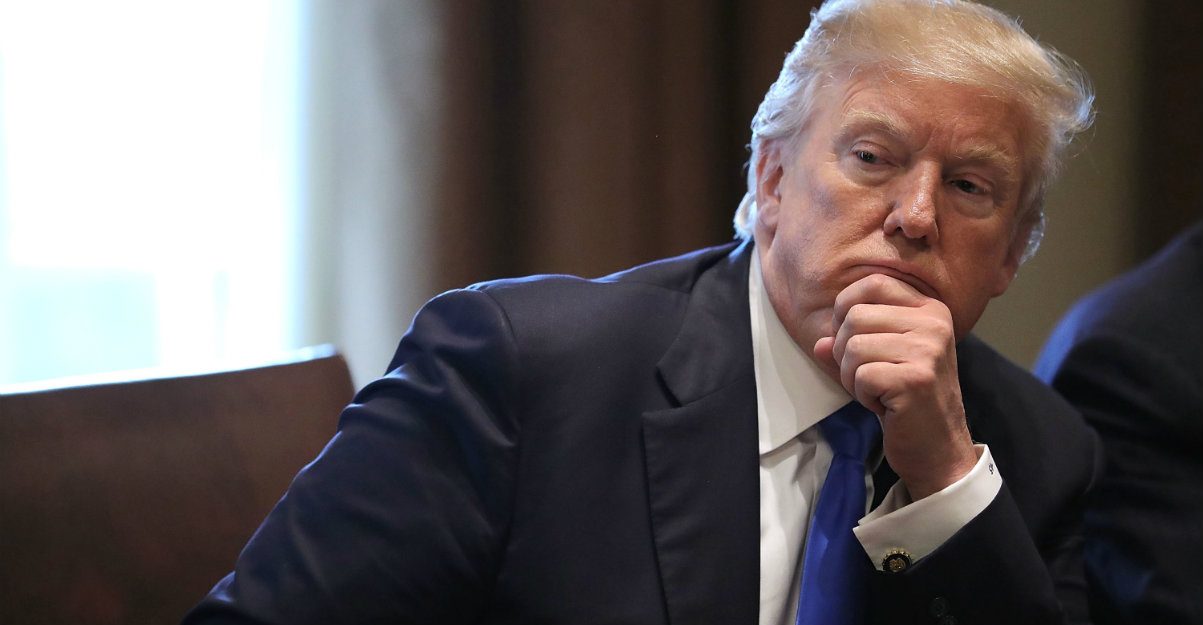 Pardon us, Mr. Trump, but some of these executive acts of clemency sure do overlap a lot with current events. Twitter is responding to the news of Dinesh D’Souza‘s pardon and the floated possibility of two more.

It isn’t the first time that people have tried to read between the lines on what these acts of presidential mercy mean, but this time the observations appear to have more merit. The floated pardons of Martha Stewart and former Illinois Gov. Rod Blagojevich, and the actual pardons of Scooter Libby and D’Souza in particular have the wheels turning in people’s heads.

The connections are pretty obvious both from an alleged crime standpoint and, in some cases, a personal standpoint.

It’s also been noted that the prosecutor in the D’Souza case is Preet Bharara, a current CNN analyst who has been a thorn in Trump’s side throughout the Cohen matter. Trump fired Bharara soon after becoming president, despite earlier indications that he wanted Bharara to stay.

When you look at these pardons, you see the crimes his associates have been, or may be, charged with. Libby/Stewart – perjury/false statements (Flynn, others?); D’Souza – campaign finance fraud (Cohen); Blago – public corruption (Kushner? Others?). All related to him somehow. https://t.co/YwnKN9mdcB

Remember when *one* Clinton political pardon (Marc Rich) was debated for months and said to mar his legacy?

How about an *endless stream* of nakedly political pardons granted by a criminal seeking to signal to other criminals that if they stay loyal to him he'll pardon them too? https://t.co/txu0eG6ds9

Pardoning convictions for bribery and public corruption (Blagojevich) and making false statements to the FBI (Stewart).

Someone gave him a list of all the possible charges he's going to face and he's finding celebrities convicted of them to pardon.#consciousnessofguilt https://t.co/skp1HiQxPo

Libby was also prosecuted by Patrick Fitzgerald, who is a longtime friend of James Comey‘s and is representing him. Former FBI Director Comey was fired by President Trump and then wrote a book, “A Higher Loyalty,” in part about his conversations with the president and the happenings leading up to and after the 2016 election.

Speaking of obstruction and lying, Comey prosecuted Martha Stewart and she was found guilty of conspiracy, obstruction of an agency proceeding and making false statements to the FBI.

Trump's pardons of D'Souza and Arpiao and Libby, and rumored contemplated pardons of Stewart and Blagojevich, show consistent messaging. /1

/2 The Libby pardon and rumored Stewart pardon say "the government abuses its ability to prosecute people for lies and obstruction when being investigated." That message is obviously helpful to his team. It's true, to some extent, though he's not a credible or sincere proponent.

/3 The Arpaio and D'Souza pardons say "the liberals persecute people with conservative views," which again is helpful to him and his team, particularly since he's convinced some dim partisan people that Mueller and Rosenstein are "liberals."

/6 Mostly, though, the consistent message is to his current and former allies, saying "I have your back" — hoping they will not cooperate against him or against other allies. He's not sincerely against political/excessive prosecutions at all. They're in his stump speech. /end

Rod Blagojevich was infamously impeached from the governor’s mansion in Illinois in 2009 and then was sentenced to 14 years in prison for public corruption. He was also prosecuted by, you guessed it, Patrick Fitzgerald.

Both Blagojevich and Stewart just so happen to have been associated with a certain show known as the Apprentice.

Rod Blagojevich was on Celebrity Apprentice.

Previously, we noted that the New York Times‘ Maggie Haberman and others wondered in April why Trump was suddenly bringing up the possibility of pardoning Jack Johnson. “It’s almost like there’s a value right now in reminding some folks he has this power,” she tweeted.

It’s almost like there’s a value right now in reminding some folks he has this power https://t.co/IUv4SdBUcY

The president of the United States is eagerly promoting (1) the special access that some have to him (2) in the exercise of his presidential powers (3) that have been of particular public interest due to the fact the a number of his associates are indicted or under investigation. https://t.co/kovN7BGsGI

Trump, of course, followed through and pardoned Johnson a month later. But the Trump pardon of Libby was also seen as a “message.”

Rep. Adam Schiff (D-Calif.) in particular said that too was a “message to potential witnesses against Trump.”

Scooter Libby's pardon is meant to send a message to potential witnesses against Trump. That's why I’ve drafted a bill requiring that in any case with a pardon in which the president’s implicated, investigatory files must be given to Congress to see if it’s obstruction of justice pic.twitter.com/WXC2wWMaqQ