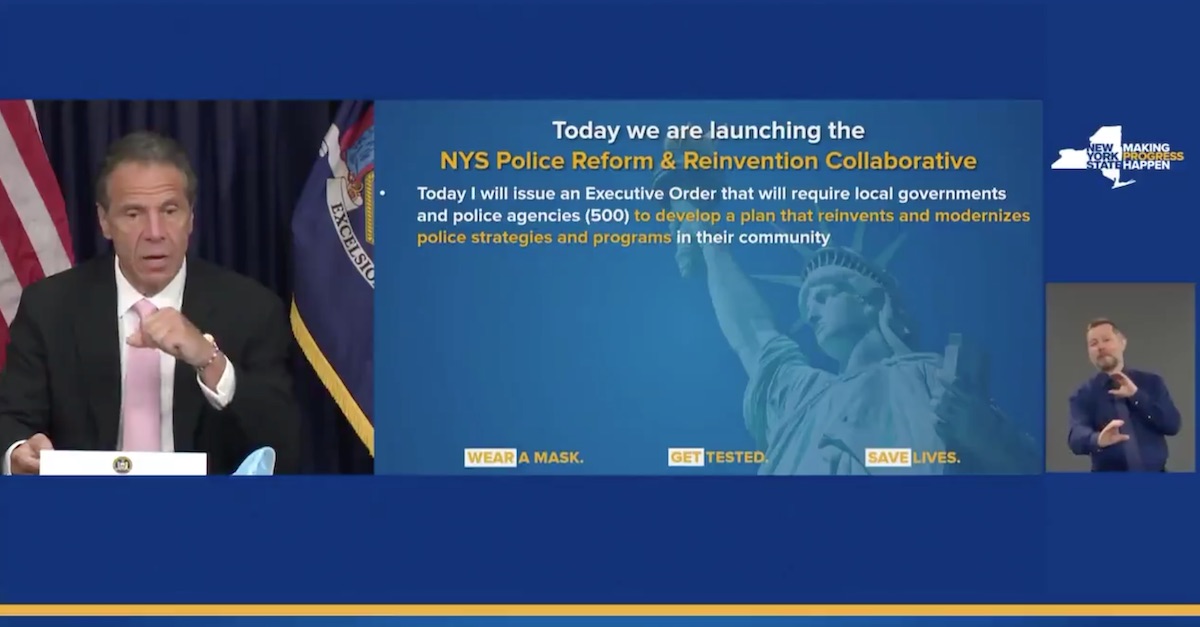 Democratic New York Gov. Andrew Cuomo (D) announced on Friday that he was signing legislation to repeal Section 50-a of the New York State Civil Rights Law, which has long been used to long shielded individual police officers’ disciplinary records from the media. That was expected, and so was a ban on chokeholds. But Cuomo also said he would issue an executive order to force local governments and police agencies to come up with reform plans—or else lose eligibility for state funding.

#BREAKING: I am signing into law nation-leading criminal justice & police reform bills — including legislation that ends 50-A & bans chokeholds.

Thank you to @AndreaSCousins, @CarlHeastie & the Legislature for your partnership and fast action.

This is a historic moment for NY.

At the same time, Cuomo made an executive order announcement.

“We’re not going to be, as a state government, subsidizing improper police tactics. We’re not doing it. And this is how we’re going to do it. I’m going to sign an executive order today that will require local governments and police departments all across the state—about 500—to develop a plan that reinvents and modernizes police strategies and programs in their community,” he said.

“They must formulate a plan. They have to address the use of force by police officers, crowd management, community policing, bias awareness, de-escalation, restorative justice, community-based outreach. They have to have a transparent citizen complaint deposition procedure,” Cuomo added.

Cuomo said the plan then has to be be enacted by local law in every city and every county by April 1, 2021 in order to be eligible for state funding.

Watch Cuomo’s announcement, in part, below:

BREAKING: @NYGovCuomo to use state funding, via an executive order, to force local municipalities to pass a #policereform plan.
This on the same day he signs 10 bills on policing the NY State Legislature just passed. pic.twitter.com/jqGbbOHPIj