Grenell: Companies That Don't Sell Tech to Cops Should Be Punished | Law & Crime 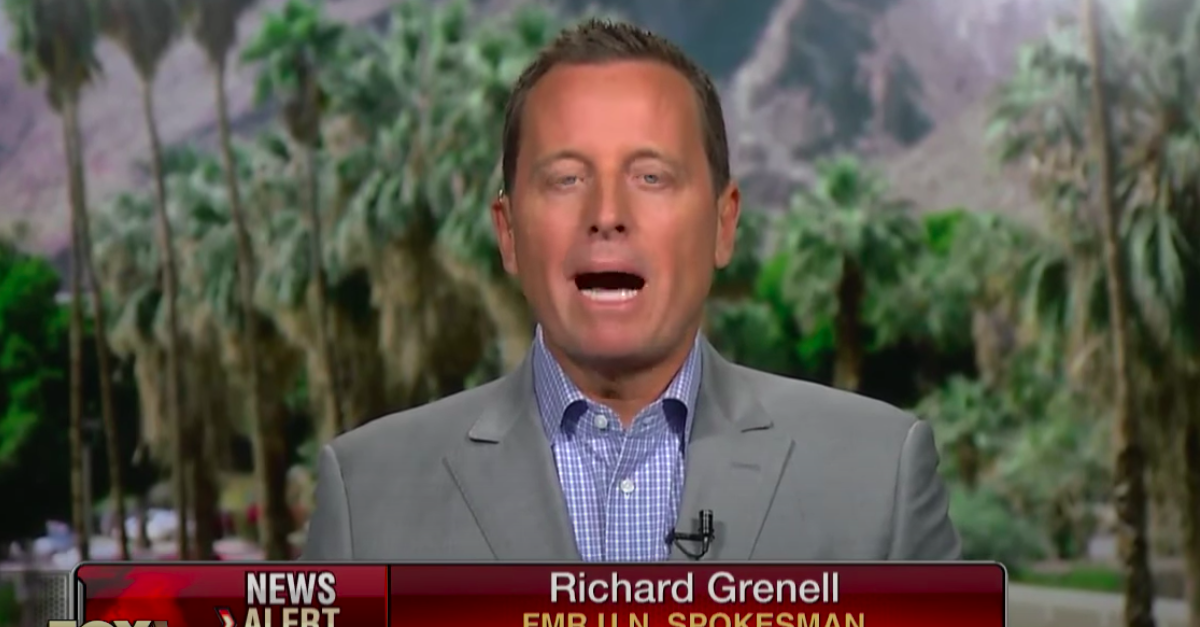 President Donald Trump’s former acting Director of National Intelligence on early Friday morning said that private companies which refuse to sell police departments the software and technology they want should face “consequences,” which would include being barred from obtaining federal government contracts.

Richard Grenell, who served as the U.S. ambassador to Germany for two years prior to his three-month stint as acting DNI from February to May, was referring to Microsoft’s decision to join a growing list of tech companies that have pledged not to sell police departments facial recognition software until there are federal laws in place to regulate its use.

“They should now be barred from federal government contracts – there should be consequences for not selling technology to police departments,” Grenell wrote on Twitter, also tagging President Trump in the post.

They should now be barred from federal government contracts – there should be consequences for not selling technology to police departments. @realDonaldTrump https://t.co/dsOVPVfufI

During a Washington Post Live event Thursday, Microsoft President Brad Smith said the company would not be selling the software to police until Congress enacted a national law “grounded in human rights, that will govern this technology.”

“The bottom line for us is to protect the human rights of people as this technology is deployed,” Smith said, aligning the company with other tech giants such as IBM and Amazon, both of which have made similar pledges.

This position was stated in the aftermath of George Floyd’s killing at the hands of police late last month. The Floyd case sparked protests and demonstrations against police brutality across the globe. The protests, some of which devolved into rioting and looting, also produced reams of footage showing police officers using force to deal with peaceful protestors.

In October, Microsoft was awarded the Joint Enterprise Defense Infrastructure (JEDI) cloud computing contract with the U.S. Department of Defense, which is reportedly worth up to $10 billion, though Amazon is challenging the decision in court.

The American Civil Liberties Union (ACLU), which has long been against State use of facial recognition software as it would allow for suspicionless surveillance of the public, responded to Grenell, saying the technology would essentially allow the government unfettered access to citizens’ lives.

“This would create a world in which the government can track your every movement, know who you are, where you’ve been, and even try to predict where you’re going next. It would be the end of privacy as we know it,” the organization wrote.

This would create a world in which the government can track your every movement, know who you are, where you've been, and even try to predict where you're going next.

It would be the end of privacy as we know it.

Conservative attorney Gabriel Malor was similarly critical of Grenell, pointing out the logistical and ideological inconsistencies of his position.

(1) The fed. gov't runs on Microsoft products, you're not gonna retrain people on like Linux or whatev.

(2) Once upon a time conservatives championed the right of business owners to decline service if it violated their conscience rights. I'm sure I heard about a baker or two. https://t.co/WlgxGegQq4

Others, such as First Amendment lawyer Ari Cohn, were less diplomatic.

There should also be consequences for being an idiot, but here you are… https://t.co/pfe9MJO0Wn