GOP State Supreme Court Justice: ‘If We’re as Bad as the Other Side Says We Are, I Will Buy You a Ticket to Leave’ 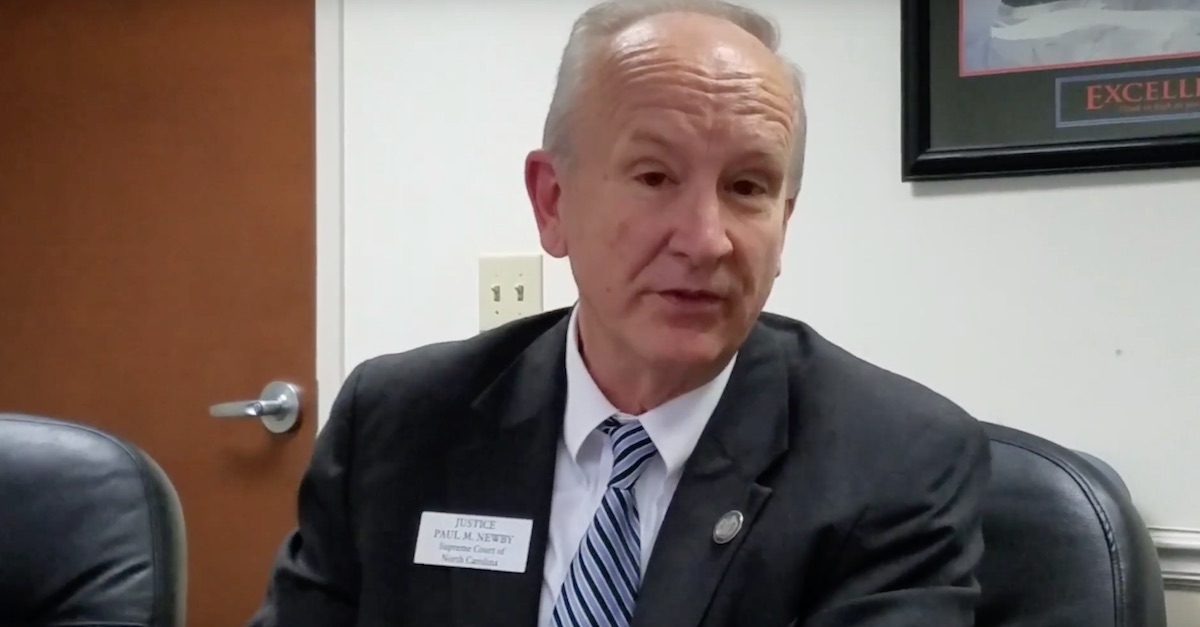 The only registered Republican on the state Supreme Court in North Carolina said two weekends ago in a roughly nine-minute speech “If we’re as bad as the other side says we are, I will buy you a ticket to leave. I mean, just leave.”

In the speech, Justice Paul Newby–reportedly the longest-serving member of the court–asked his audience right out of the gate to “Imagine seven AOC’s on the state Supreme Court.” This was, of course, a reference to Rep. Alexandria Ocasio-Cortez (D-N.Y.), but it was also a reference to the other members of the state Supreme Court, himself excluded — “Well folks, we’ve got six. It’s six to one. As my daughter Sarah said, I am the last man standing.”

What was the purpose of this speech? According to local news outlet WRAL, which first reported on Newby’s speech, Newby was “upset when Gov. Roy Cooper appointed [Chief Justice Cheri] Beasley to the top spot on the court to fill a vacancy earlier this year. He’s running against her for the seat next year in one of three Supreme Court races on the ballot, all of which are likely to be well-funded partisan affairs.”

In 2018, the left put $1.5 million to get their AOC person on the court. Is this unique in North Carolina? No. According to a recent article in the Washington Times, this has been a long term strategy by Obama and those who were part of his inner circle to stack the state Supreme Court for that day when the U.S. Supreme Court would say, well, that is not a federal issue, we’ll give it back to the states.

According to NC Policy Watch, the “AOC person” he was referring to was Justice Anita Earls. The same article said that “State judicial code makes discipline unlikely for Justice Paul Newby.”

Newby went on to say, however, that something could be done about stacking of the courts:

Well one is, we can have some really good candidates. Now there will be three seats open on the North Carolina Supreme Court, OK. I’m running for Chief Justice. The Governor had an opportunity to do the right thing and appoint the senior associate that’s been done pretty much throughout history — but this will shock you, I hope you’re sitting down, those of you that can’t find a seat, get ready for this — this Governor that we have now is a political preacher who does what politics mandates over what is right for the state.

We the people can change that. We can elect the senior associate for chief justice. Tamara Barringer, Phil Berger Jr. will be running for the Supreme Court — we can go to 3-4 or we could be 0-7. This will be November 2020.

Newby eventually appealed to the Abraham Lincoln’s Gettysburg Address before saying people coming to America “illegally or any other way” are doing so to escape socialist countries:

I want you to think about President Lincoln’s closing prayer in his Gettysburg address. He says that this nation under God might have a new birth of freedom, and that a government of the people, by the people for the people would not perish from the face of the earth. Why are people trying to get into this country — let’s use common sense — why are people trying to get into this country illegally or any other way? Because it is freedom and liberty, folks. And what countries are they leaving? Socialism. I’m sorry, we may not be perfect, but we’re the best nation in the world and why don’t we just use common sense?

If we’re as bad as the other side says we are, I will buy you a ticket to leave. I mean, just leave. You’ve got freedom here in America to leave. We don’t build laws to keep you in. We ought to have a wall to keep you out if you’re trying to get here illegally. That’s wrong, OK? So that’s my prayer.

You can read Newby’s full remarks here. The speech reportedly occurred on Saturday July 13, the day before President Donald Trump’s “go back” to your country tweets.