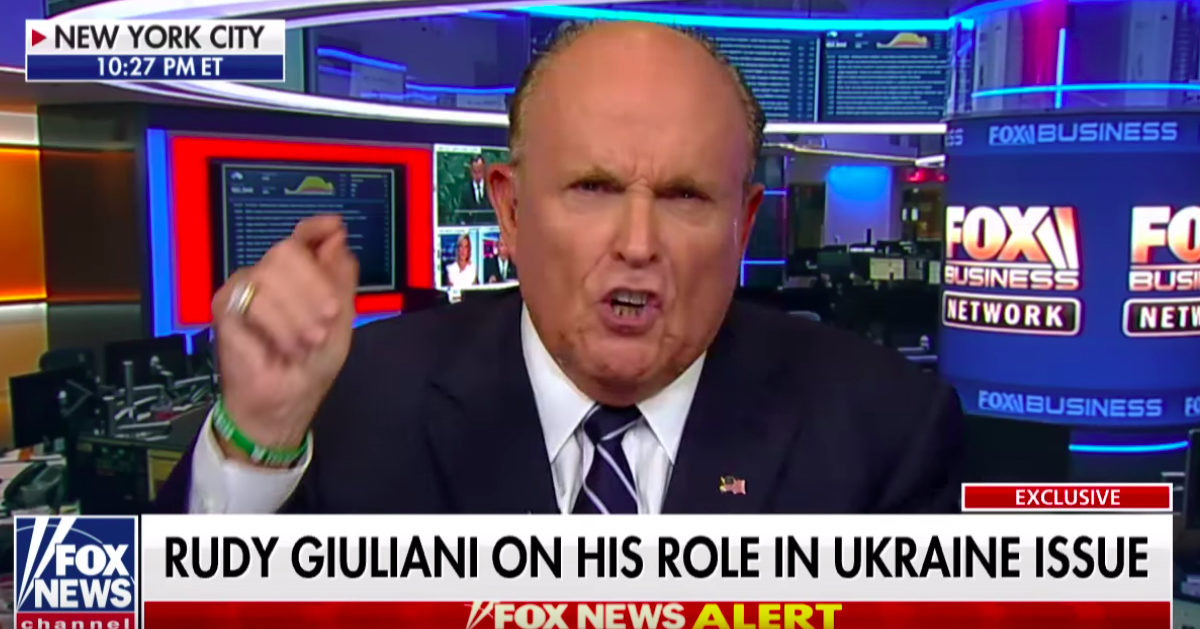 Rudy Giuliani issued a bizarre challenge to Democrats on Tuesday, saying that the only reason they aren’t calling for him to testify in the president’s ongoing impeachment trial is because they’re afraid of his “physical presence.”

“[Democrats] have indicated in every way possible they are afraid of my physical presence,” the president’s personal attorney wrote in a series of fiery late-night text messages to New York Daily News reporter Chris Sommerfeldt.

Asked why House Dems only subpoenaed Giuliani for records and not testimony, an Intel Committee official said “documents are necessary to test the credibility of any witness, but especially one like Giuliani."

Apparently incensed by the sudden swell of news coverage being dedicated to former National Security Adviser John Bolton–whose forthcoming book reportedly provides first-hand confirmation that the hold on aid to Ukraine was ordered directly by the president and that the release of that aid was contingent upon investigations of the Bidens.

“They know I know what they are covering up. Why do they want Bolton if not me if they can prove their lies. Again I really should stop wasting my time,” Giuliani said.

Giuliani’s desire to be called as a witness doesn’t just undercut the stated objective of Senate Republican leadership and his client in the White House, it also belies his actual conduct in connection with the impeachment investigation thus far.

In a letter to House investigators in October, Giuliani’s then-attorney Jon Sale said his client refused comply with a congressional subpoena for documents relating to his work in Ukraine because the impeachment inquiry was “unconstitutional, baseless, and illegitimate.” The letter also claimed that all of the documents demanded by lawmakers were “protected by attorney-client, attorney work-product, and executive privilege.”

But Giuliani asserted that there was a difference between a subpoena for documents and allowing him to testify before the Senate in-person.

“If they wanted to subpoena me they would have to serve a subpoena in personem [sic] not a subpoena ducus tecum [sic],” he texted Sommerfeldt, adding, “Do you understand? I’d be impressed,” in regard to the Latin legal terms–both of which Giuliani misspelled.

It has now also come to my understanding that Giuliani misspelled both of those Latin terms.

It's supposed to be "in personam," not "in personem."

It's also supposed to be "duces tecum," not "ducus tecum."

In addition to being a bit rusty on his Latin legalese, legal experts have pointed out that Giuliani’s work in Ukraine would not be covered by attorney-client privilege, as he was attempting to dig up dirt on the Bidens and not offering any legal advice–Giuliani himself has vacillated several times as to whether his work in Ukraine was related to his personal representation of President Donald Trump or at the behest of the State Department.

Despite the tough talk, Giuliani also conceded to ABC News earlier this month that if he were to appear as a witness he wouldn’t be permitted to divulge much information, again asserting that he was “bound by attorney-client privilege so it’s not just my decision.”