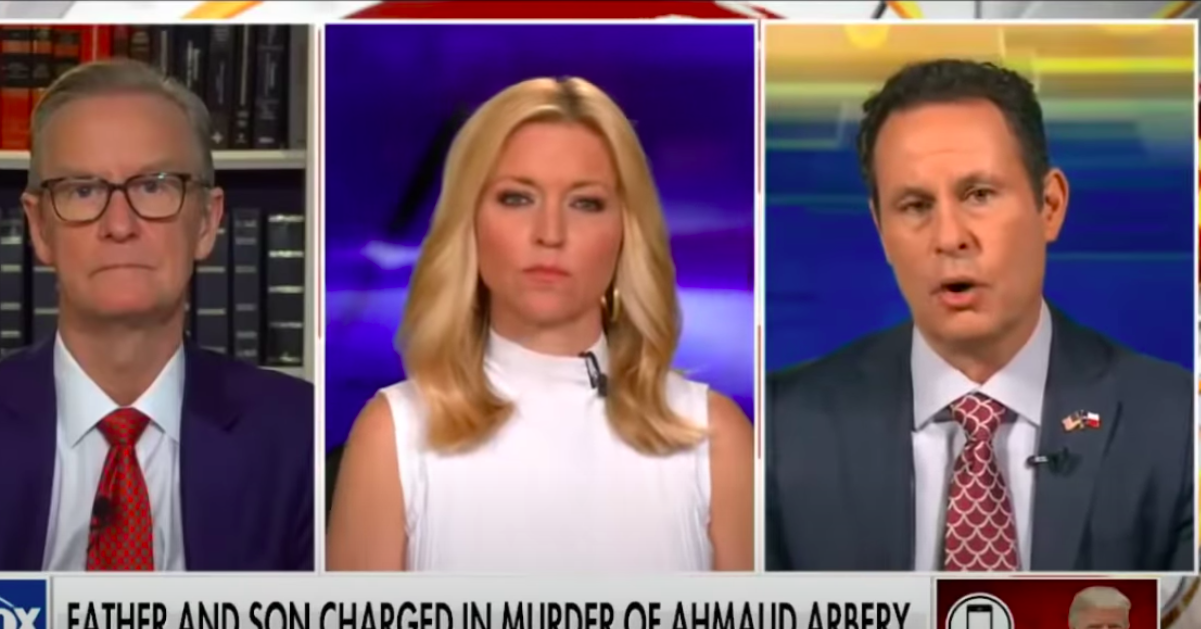 A Fox News morning host is coming under fire for expressing concern that the alleged murder of a 25-year-old unarmed black man in the Deep South could “end up in a racial situation.”

During a telephone interview with President Donald Trump on Friday, the president said he had seen the now-widely circulated video of showing Gregory McMichael and Travis McMichael, both of whom are white, gunning down Ahmaud Arbery, who is black, while he was jogging in Georgia. Trump referred to the tape as “very, very disturbing.”

A 36-second video of the shooting, which took place on February 23, was released last week. It showed the McMichaels in a pickup truck stopped in the street. They were waiting for Arbery as he jogged down the road in broad daylight.

Arbery then attempted to run around the truck. A brief struggled ensued. The man carrying a shotgun, believed to be Travis McMichael, opened fire.

A man believed to be Gregory McMichael is shown standing on the bed of the truck holding a handgun before coming down and standing next to the shooter. The fatally wounded Arbery’s knees buckled, and he fell down in the street. Following the shooting, Gregory McMichael, a retired police officer, told authorities he believed Arbery resembled a suspect in a series of local break-ins and that he attacked Travis, his son, when they confronted him.

However, the county’s chief of police on Friday told CNN that there had not been a reported burglary in the neighborhood in at least seven weeks. Local law enforcement has also been heavily criticized for failing to make any arrests in the incident for months, only doing so two days after the video surfaced online.

“I looked at a picture, that young man – he was in a tuxedo […] and I will say that that looks like a really good young guy. And it looks very, it’s a very disturbing situation to me and my heart goes out to the parents and the family and the friends,” Trump said. “But yet we have to take it, you know, law enforcements gonna look at it and they have a good governor in the state, and he’s – a very good governor – gonna look at it very strongly.”

Fox & Friends host Brian Kilmeade then followed up with a question about the racial overtones surrounding the alleged murder.

“In the past, when there’s been a black-white shooting, a lot of times things get — spiral out of control,” Kilmeade said. “What can you do to make sure justice is done and this doesn’t end up in a racial situation?”

“Fox & Friends host concerned that murder of unarmed black jogger with shotgun in southeast Georgia by white former cop and son in pickup truck who were then let go by former cop’s ex-colleagues despite having victim’s blood on hands might be turned into one of them racial things,” he wrote on Twitter.

Fox & Friends host concerned that murder of unarmed black jogger with shotgun in southeast Georgia by white former cop and son in pickup truck who were then let go by former cop’s ex-colleagues despite having victim’s blood on hands might be turned into one of them racial things https://t.co/alKmJfsPq4

Texas attorney Garrick A. Farria of the Farria Law Group posted a picture of the two alleged shooters, writing, “This became a racial situation when these two race warriors decided to armor up.”

This became a racial situation when these two race warriors decided to armor up. pic.twitter.com/wMU0YLIB5D

Many others pilloried the question for ignoring that this is already a “racial situation.”

FOX: The Ahmaud Arbery killing could become a racial situation.

Q: Uh, it was a racial situation the moment that it happened.

FOX: No, we mean it could escalate & someone could get killed.

It
Is
A
Racial
Situation.

IT IS ALREADY A RACIAL SITUATION

I’m stuck on the question: “What are you going to do to make sure that this doesn’t end up in a racial situation?”

Hey fake fox entertainment ‘Einsteins’ , the Ahmaud Arbery MURDER is and has always been a ‘racial situation’ – but lets call it what it is- a LYNCHING! #fakefoxnews