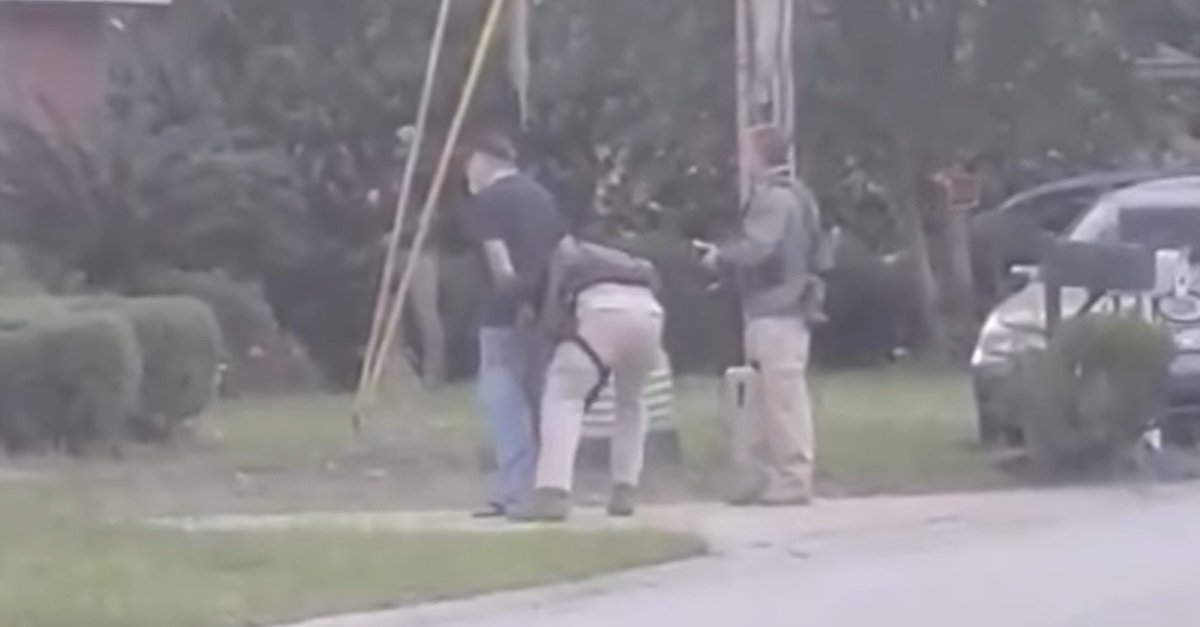 Image of McMichael arrest on Thursday

District Attorney Jackie Johnson, the first prosecutor to handle the Ahmaud Arbery case, faces a new allegation about the handling of the investigation into a shooting that has shocked the nation. Glynn County commissioners Allen Booker and Peter Murphy claimed that Johnson’s office stood in the way of arrests. That’s more than notable because one of the defendants–Gregory McMichael, 64–used to work for her office at an investigator.

Both he and fellow commissioner Peter Murphy said they’d spoken to cops about it. In Murphy’s case, he said that officers determined that there was probable cause against the defendant and son Travis McMichael. But Johnson’s office stood in the way of a case.

“They were told not to make the arrest,” Murphy said.

Johnson is no longer part of the investigation. She recused because her link to the elder McMichael created a conflict of interest. Her office did not respond to a request for comment, according to the AJC. The phone simply kept ringing when Law&Crime attempted to reach out. The last attempt ended in a busy signal. We also tried contacting the office through Facebook, but the “Send Email” function didn’t work on the office’s account.

Two other district attorneys have handled the case as well.

The McMichaels were arrested Thursday for murder and aggravated assault. The shooting happened back on February 23 in Glynn County. The father allegedly told police he and his son were trying to perform a citizen’s arrest on Arbery because they believed he was a burglary susupect. Travis shot and killed Arbery in self-defense, according to this account. The victim’s family, however, has said that he was jogging. Newly released video seemed to show that Arbery was anything but an aggressor in the confrontation.

Protests broke out in Georgia last night after a video emerged showing the shooting death of 25-year-old Ahmaud Arbery in Feb. A district attorney says he wants a grand jury to consider charges against the two white men who chased & killed a black man.@OmarVillafranca reports. pic.twitter.com/WMVPk9eL4h

The Georgia Bureau of Investigation said they were only recently asked to handle the homicide investigation into Arbery’s death, but they quickly determined there was probable cause against the defendants.

.@GBI_GA Director Vic Reynolds said the bureau determined in 36 hours that Gregory and Travis McMichael needed to be arrested.

“That speaks volumes for itself,” he said. “There is more than sufficient probable cause for felony murder.”

The defendants declined to comment on the case in a CBS report published Wednesday.