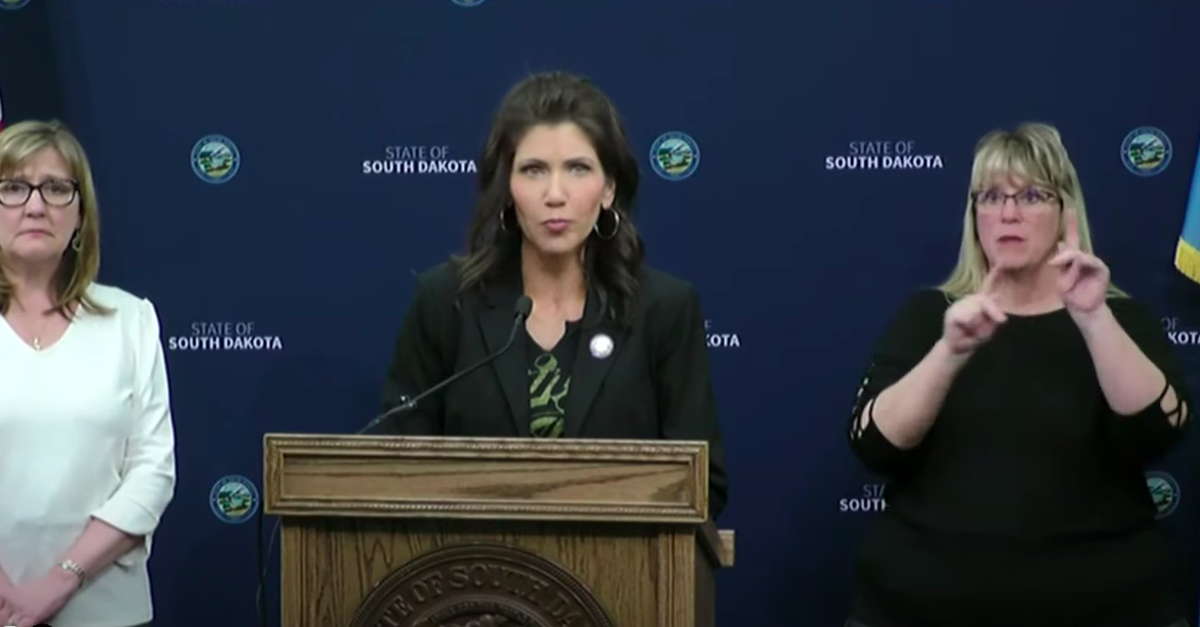 South Dakota Governor Kristi Noem (R) told a pair of Native American tribal leaders that they have 48 hours to remove checkpoints meant to prevent the spread of the novel coronavirus or else potential legal action.

Gov. Noem on Friday sent letters to the leaders of the Cheyenne River Sioux Tribe and the Oglala Sioux Tribe claiming that checkpoints that have been set up on those reservations “interfere with traffic on US and State Highways,” demanding they be taken immediately, despite their aim toward ensuring public health.

“The State of South Dakota objects to tribal checkpoints on US and State Highways regardless of whether those checkpoints take into consideration the safety measures recommended by the [South Dakota Department of Transportation],” she wrote in the letter to Cheyenne River Sioux Tribe Chairman Harold Frazier. “Safety recommendations do not constitute consultation and certainly do not equal agreement. I request the Tribe immediately cease interfering or regulating traffic on US and State Highways and remove all travel checkpoints. If the checkpoints are not removed within the next 48 hours, the State will take necessary legal action.”

According to the Cheyenne River Sioux Tribe’s social media posts, the checkpoints require reservation residents to fill out a health questionnaire both when they leave and upon their return from travel related to essential activities outside the reservation.

Non-reservation residents are only allowed through the checkpoint if they’re not coming from a “COVID-19 hotspot” and their travel is connected with an essential activity, but they too must also complete a tribal health questionnaire.

“We are strongest when we work together; this includes our battle against COVID-19,” Gov. Noem said in a statement sent to media Friday afternoon.

Gov. Noem’s public threats prompted a response from Chairman Frazier, who released a statement later in the day on Friday declining to remove the checkpoints, saying they were indeed constructed after “consultation” with the state government as the word is defined in both English and the Lakota language.

“I absolutely agree that we need to work together during this time of crisis, however you continuing to interfere in our efforts to do what science and facts dictate seriously undermine our ability to protect everyone on the reservation. Ignorant statements and fiery rhetoric encourage individuals already under stress from this situation to carry out irrational actions,” Chairman Frazier wrote. “We invite you to join us in protecting the lives of our people and those that live on this reservation. I regretfully decline your request. I stand with our elder Councilman Ed Widow that the purpose of our actions is to, ‘save lives rather than save face.’”

See all of the correspondence below.

5 8 20 Correspondence From … by Law&Crime on Scribd

5 8 20 Correspondence From … by Law&Crime on Scribd

Statement on Noem Letter 5-… by Law&Crime on Scribd