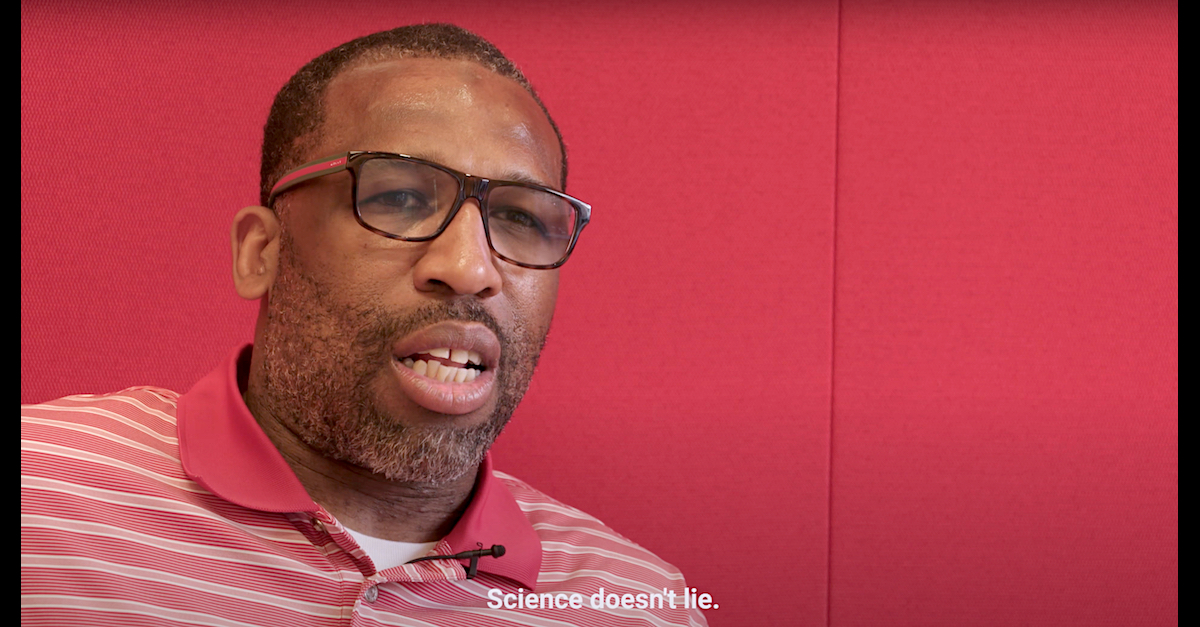 Anthony Wright is seen in a freeze frame taken from an Innocence Project video about his 25 years in prison.

Three former Philadelphia homicide detectives have been indicted on charges of perjury and false swearing in connection with a botched murder case, District Attorney Larry Krasner (D) announced in a statement and in a concomitant press conference on Friday.

The three former detectives — Manuel Santiago, Martin Devlin, and Frank Jastrzembski — are accused by a grand jury of “lying in 2016 both in and out of court about their on-duty roles in the investigation, interrogation, and wrongful conviction of an innocent man, Anthony Wright, which occurred in 1993,” Krasner said in a statement. “Eventually, Mr. Wright’s innocence was proven by DNA evidence that also identified the actual perpetrator of the crime, Ronnie Byrd.”

“Wright’s wrongful conviction was overturned, but incredibly the Philadelphia [District Attorney’s Office] under former DA Seth Williams re-tried him despite irrefutable science establishing Wright’s innocence,” Krasner continued. “The three detectives provided sworn testimony and documentation during the 2016 re-trial (where he was acquitted) and in Wright’s subsequent, successful civil rights lawsuit. Some of the sworn testimony and documentation these detectives provided form the basis for criminal charges.”

The charges of false swearing are second-degree misdemeanors, while the charges of perjury are third-degree felonies, Krasner said. The DA said that he expected the three ex-detective defendants to turn themselves in through their attorneys or to face arrest.

The Philadelphia Inquirer reported late Friday afternoon that the detectives “turned themselves in at a Northeast Philadelphia police district.”

An attorney for the men told the newspaper that all three defendants were “innocent of these charges.”

“These three good men dedicated their lives to seeking justice for victims of crime,” defense attorney Brian McMongale continued.  “In this case they sought justice for a woman who was brutally raped and murdered.”

Krasner, however, convinced a grand jury that the officers committed multiple misdeeds:

According to the [grand jury] presentment, Wright was convicted in 1993 for the 1991 rape and murder of 77-year-old Louise Talley on the strength of a coerced false confession — referred to as the Santiago/Devlin Confession — and false testimony from Jastrzembski about the location of clothing he falsely claimed was found during a search of Wright’s bedroom, but was actually found in the victim’s home.

According to the presentment, Wright, then 20 years old, repeatedly told detectives he had no involvement or knowledge of the crime, and spent hours repeatedly crying for his mother, whom he could hear outside the interrogation room screaming for him. Less than 24 hours after discovering Mrs. Talley’s body, detectives Santiago and Devlin coerced Wright into initialing and signing a false confession to a crime Wright did not commit, the details of which he did not know. Wright’s interrogation by Santiago and Devlin was not recorded or taped.

The Grand Jury further concluded that the detectives deployed unlawful tactics to coerce Wright into signing the false confession, including by threatening to ‘pull his eyes out and skull-fuck him,’ falsely stating that Wright could go home if he signed the Santiago/Devlin Confession, and directing Wright to sign and initial the Santiago/Devlin Confession to create the appearance that he had read and verified its contents while preventing him from reading its contents.

Krasner continued by saying the wrongly convicted defendant “purportedly confessed” to wearing certain clothing while committing the crime that he did not actually commit. “Jastrzembski later testified falsely under oath” that he and two others recovered that clothing during a search of Wright’s home, Krasner said. But the clothing was eventually tied to the man Krasner identified as the true attacker.

“Decades later, DNA testing proved that another man, Ronnie Byrd, who lived near the victim’s home (and who by then was deceased), had raped and murdered Mrs. Talley,” the DA continued.  “The clothing that Wright’s false confession stated he wore during the crime, and that Jastrzembski later falsely claimed he found during a search of Wright’s home, yielded ‘wearer’ DNA from Talley, establishing that the clothing was actually worn by Talley, not Wright.”

The accusations against the three officers are tied to Wright’s 2016 re-trial and 2017 civil lawsuit because Krasner said the statute of limitations for the officers’ original 1991-1993 conduct “[a]rguably” expired.

“In that 2016 re-trial, Philadelphia jurors deliberated for less than one hour before exonerating Wright,” Krasner noted.

A specific breakdown of the charges was provided by Krasner’s office:

Martin Devlin is charged with 2 counts of Perjury and 2 counts of False Swearing for false testimony regarding the Santiago/Devlin Confession at the 2016 retrial and 2017 deposition.

“This is an open and active criminal investigation, and the cases will be tried by the District Attorney’s Office Conviction Integrity Unit (CIU) and Special Investigations Unit (SIU),” Krasner continued.  “The SIU hotline, 215–686–9608, is available for members of the public who wish to report potential crimes, including official misconduct, directly to my office.”

The Philadelphia Inquirer reported that Wright spent 25 years in prison before his exoneration. The newspaper also noted that “Krasner’s Conviction Integrity Unit has helped overturn at least four cases” the three detectives worked. The prosecutor, the newspaper said, “contend[ed] that the convictions were marred by coerced confessions, fabricated or hidden evidence, or secret deals with key witnesses.”

Read the grand jury documents below: