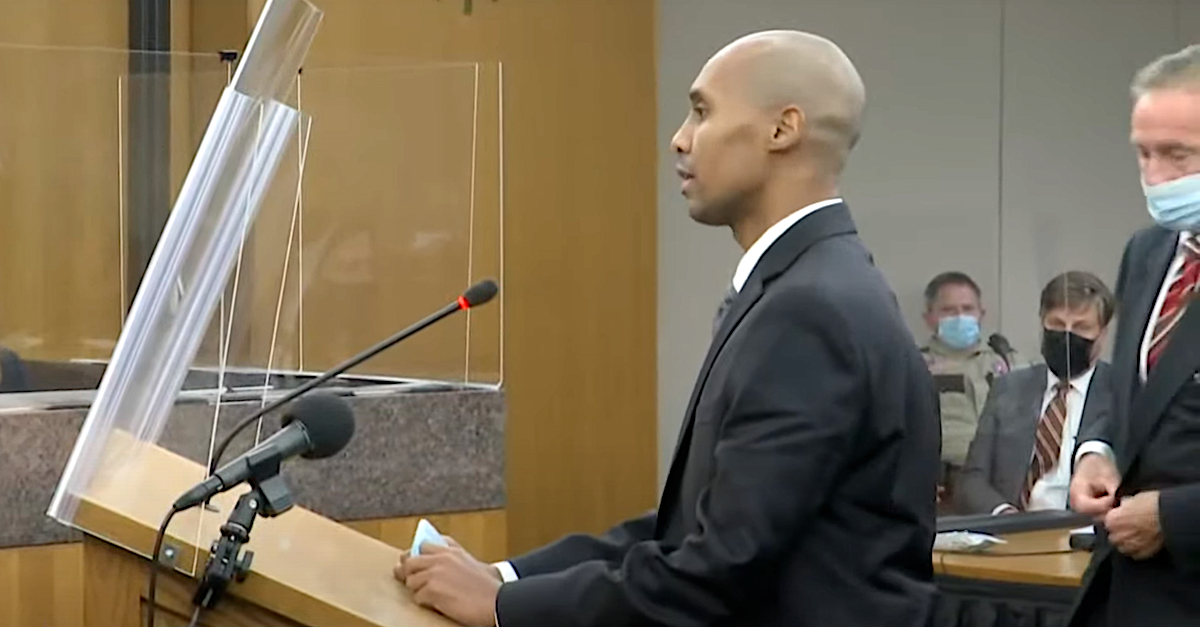 A Minnesota judge on Thursday re-sentenced a convicted police officer to 57 months behind bars — the maximum possible punishment — in the shooting and killing of a woman who called 911 for help after hearing another woman scream in an alleyway.

As Law&Crime previously reported in detail, the Minnesota Supreme Court unanimously flipped the third-degree murder conviction — the highest count on the actual conviction. That decision forced a trial judge to re-sentence Noor on the remaining lesser conviction for second-degree manslaughter.

Prosecutors read a series of victim impact statements when the re-sentencing proceeding.

“Mohamed Noor should feel the weight of the community’s distress and its desire for justice and police accountability,” the victim’s family said in a collective statement read by Senior Hennepin County Attorney Amy Sweasy. “We should expect complete accountability from our public institutions and their staff.  When a crime against the public such as killing Justine — which is co clearly outside outside of any normal and expected behavior — is committed, we the jury and the community ask that justice be meted out honestly and justly considering the gross insult to grossly civilized standards.”

The family asked for a maximum punishment of 57 months on the remaining count. They said such a sentence would “send a message” to Noor and “other police officers” that “we require their respect for their badges.” The family’s letter expressed outrage at the possibility of a “trivial sentence.”

The family also sought a sentence that would lead to the “prevention of killings of innocent citizens” and “changes to institutional culture and behavior” among the police. 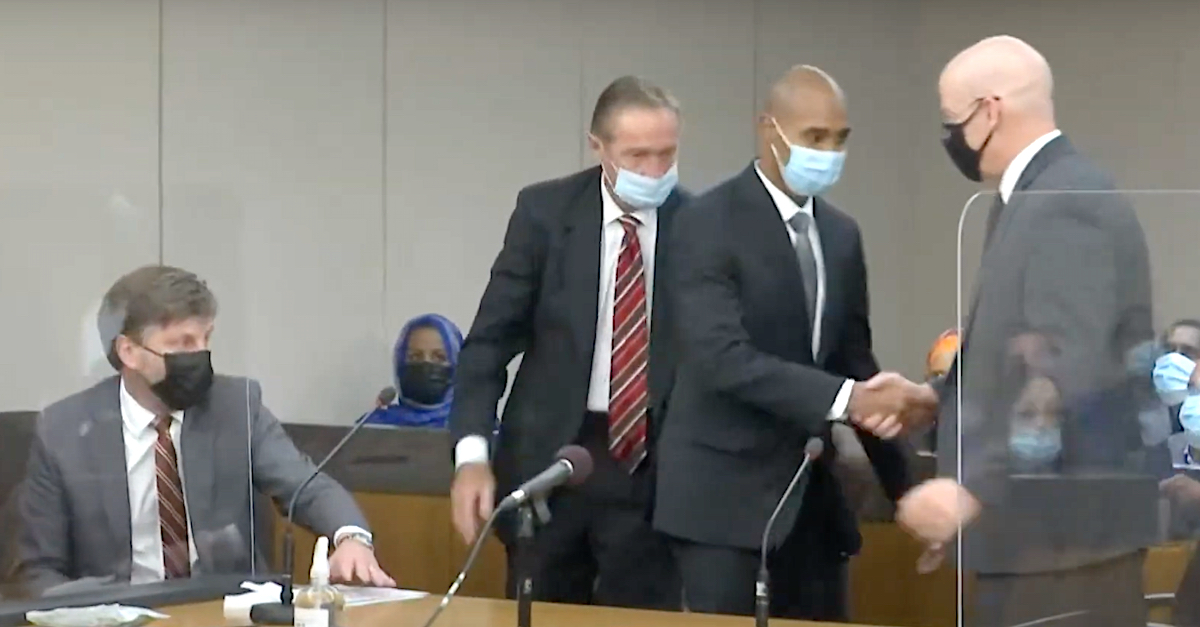 Katarina Ruszczyk, the victim’s sister-in-law, also wrote a victim impact statement which was read by an attorney. She wrote that the Supreme Court’s decision to flip the conviction on the highest count was “disappointing” and “totally confounding.”

“The blue wall of silence that formed around him was, and is, very real,” Ruszczyk wrote to the court, “because for so long the facts that we were given did not add up.”

“The truth is my sister-in-law was a helpful, caring citizen,” Ruszczyk’s letter went on. “The truth is she called the police for help that night. The truth is Noor saw a person and intended to shoot that person. He fired his gun in the face of his partner inside a squad car, and then he killed our Jussie.”

The sister then lashed out at Noor.

He will always have the knowledge for the rest of his life is what he did was take the life of an innocent person, and I hope he learns from that.  I hope he doesn’t perpetuate the misguided myth that he was actually in the right and that he got caught up in the moment.  That is just a collection of erroneous facts rubbed together by his team of lawyers.  There is no truth to that interpretation of the facts.  No, this is a legal loophole situation, not one of moral triumph.  There are no lessons to learn if he continues to have his ego stroked by the culture of police in this state that continue to live under the protection of the blue wall of silence and a culture of killing first and refusing to ask questions later.

The truth is there is a problem of fear in the Minneapolis Police culture of machoprotectionism of their own rather than protecting the people they are supposed to serve.  There will be no systemic changes if people like Noor are continued to allow to be police, handed a gun, and are out in the community, taught by their superiors how to be trigger-happy and get away with it.  The truth is there is no justice for Justine — not unless the police culture changes and the community is safe not only from the elements of society that seek to harm them but from the institution that is supposed to protect them.

“Every day I say to myself — every day — I need to learn to live with it,” the victim’s brother said. “Only with the love for my sister and knowledge of her kindness and compassion in my heart can I do this.” 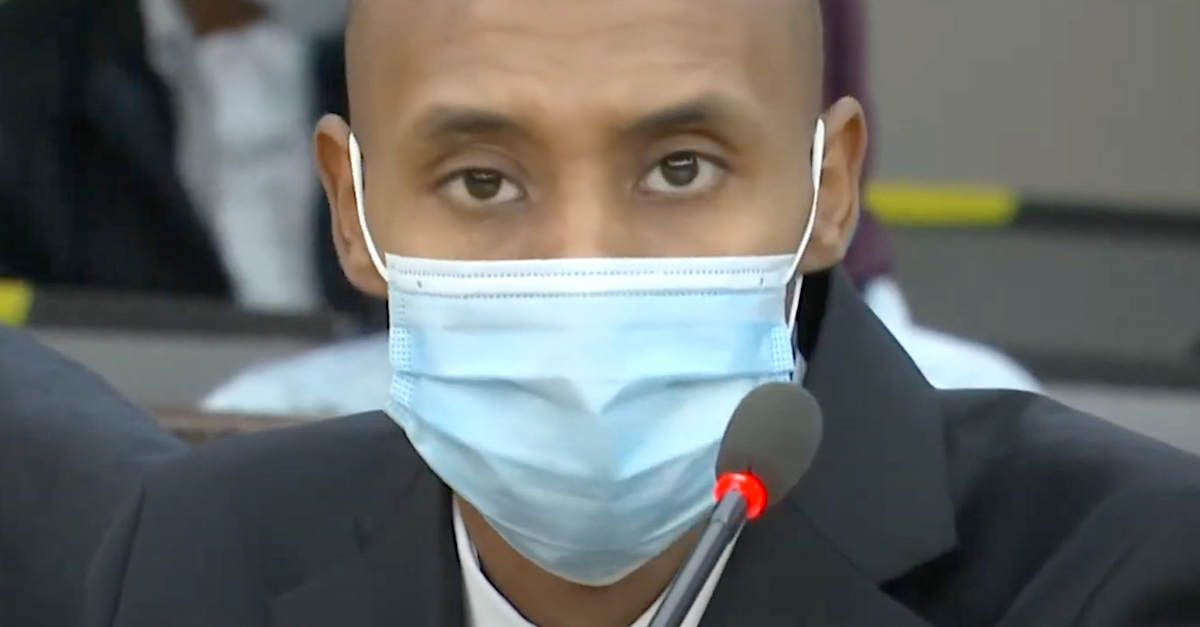 Mohamed Noor looks into a television pool camera at a re-sentencing hearing on Oct. 21, 2021, in Minneapolis. (Image via the Law&Crime Network.)

Don Damond, the victim’s fiancé, spoke to the court by videoconference.

“The truth is that Justine should be alive,” Damond said. “I will always love her, and I am deeply guided by her.”

Damond said he was still grieving the loss of his fiancée but then spoke of forgiveness:

She was a unifier, not a separator.  She lived with the highest level or morality of anyone I have the privilege of knowing. She stood for justice. She lived to transform people. She lived a life of love. She modeled a life of joy for all, and she stood for forgiveness. I watched as she generously forgave others for their injustices . . . she taught me and others that all people have value . . . I have no doubt that she would have forgiven you, Mohamed, for your inability to manage your emotions that night that resulted in you pulling the trigger. Justine was and is still my greatest teacher. Given her example, I want you to know that I forgive you, Mohamed.  All I ask is that you use this experience to do good for other people. Be the example of how to transform beyond (inaudible).  Be an example of honesty and contrition. This is what Justine would want.

“Even in death, she shows us how to live,” Damond concluded after some additional thoughts.

The proceeding then turned to the question of punishment. 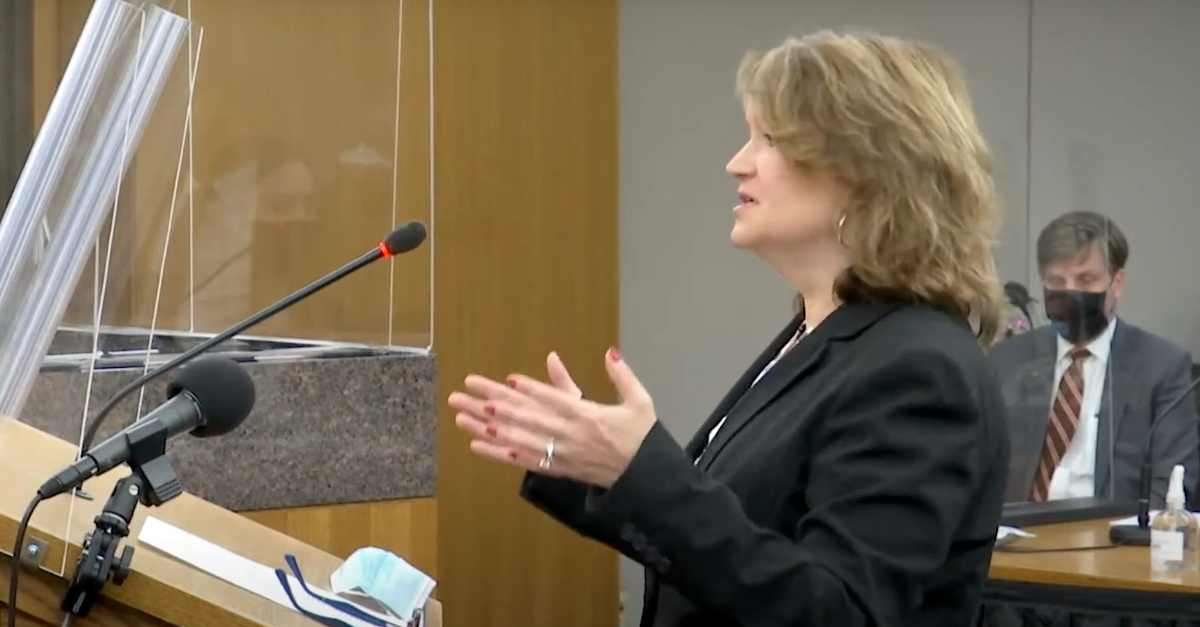 Senior Hennepin County Attorney Amy Sweasy asked a judge to re-sentence Mohamed Noor to the maximum amount of time in prison allowed by Minnesota law. (Image via the Law&Crime Network.)

Prosecutor Sweasy said Minnesota’s sentencing guidelines called for between 41 and 57 months of prison time for the remaining count. Prosecutors asked for Noor to be sentenced to the high end of the guidelines.

“By every measure,” the prosecutor continued, the case was “worse than typical for a second-degree manslaughter case.”

Sweasy pointed to Noor’s position: “he wore the badge of a Minneapolis police officer, voluntarily, and by his own statement, with pride.”

The state said the victim upheld her end of the social contract — she called police to investigate and render aid to a woman she heard screaming. It was Noor who fired upon the victim when she approached the police car to provide additional details. 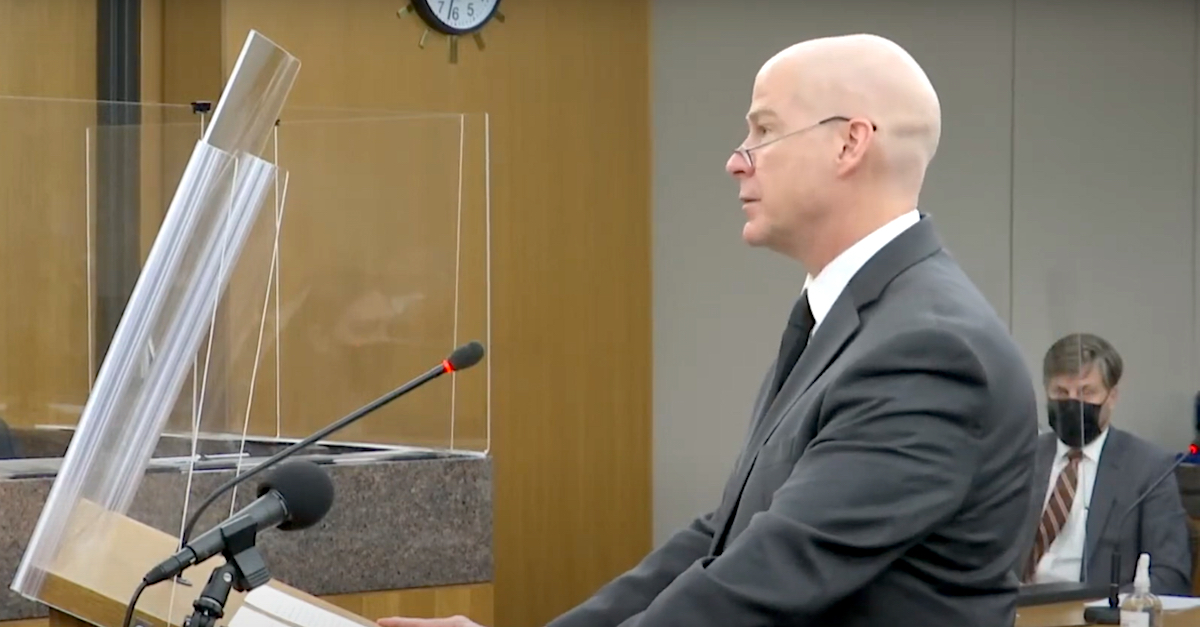 Defense attorney Thomas Plunkett argued for Mohamed Noor during a re-sentencing hearing on Oct. 21, 2021. (Image via the Law&Crime Network.)

Defense attorney Thomas Plunkett said Noor and the victim shared a “similar goodness” while asking for the minimum sentence.

“Both of these people took a similar and profound interest in those around them,” the defense attorney argued. “They wanted to make the world a better place for others.  Throughout his life, and up to this very day, Mr. Noor has worked with one measure of personal achievement, and that measure is how he has helped the people around him.  Even when he shot and killed Ms. Ruszczyk through culpable negligence, he was operating with a mistaken belief that he needed to protect his partner.  A horrible mistake to be sure, but not an act motivated by cruelty or distaste for human life.”

Noor issued his own brief statement.

“I am deeply grateful for Mr. Damond’s forgiveness; I am deeply sorry for the pain that I’ve caused that family; and I will take his advice and be a unifier,” the defendant said. 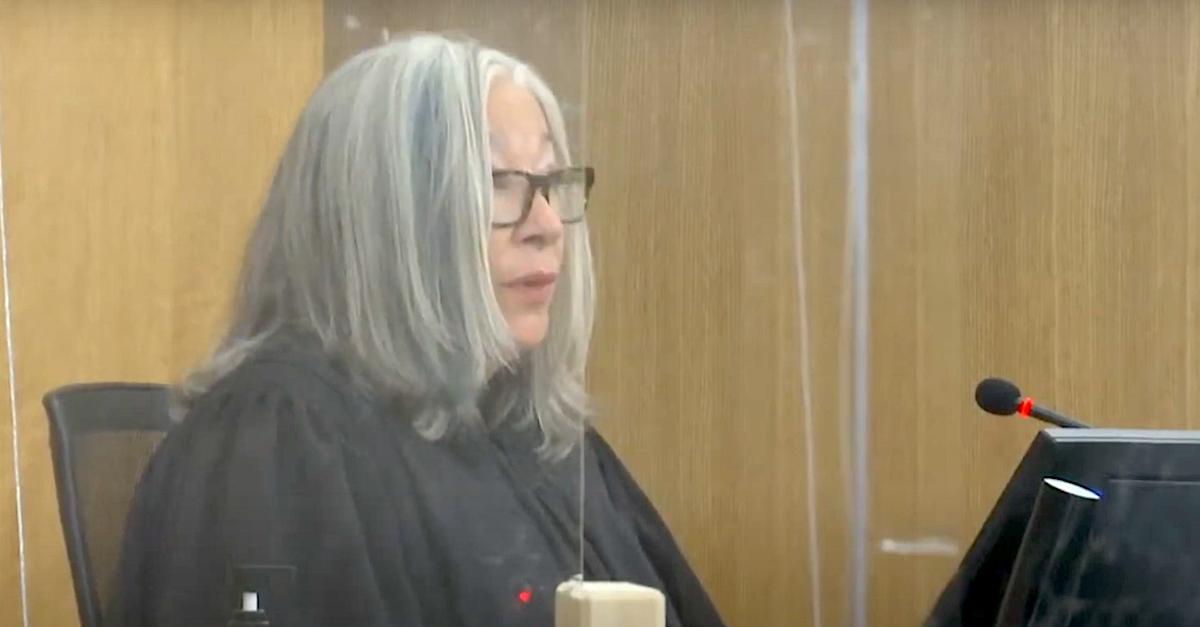 Judge Kathryn Quaintance said the jurors who convicted Noor were most concerned about changes to the police department — including the possibility that supervisors would lose their jobs in an attempt at reform. But “a lot” had changed in the world since then.

The city has since spent $47 million on police settlements, Judge Quaintance said. She referenced the police killing of another person — presumably George Floyd — in a low-risk situation that led to a death. The community “exploded,” she noted.

Judge Quaintance sentenced Noor to the maximum — 57 months — with credit for 908 days served. Noor has, in essence, served slightly more than half of his new sentence.

[All images via the Law&Crime Network]