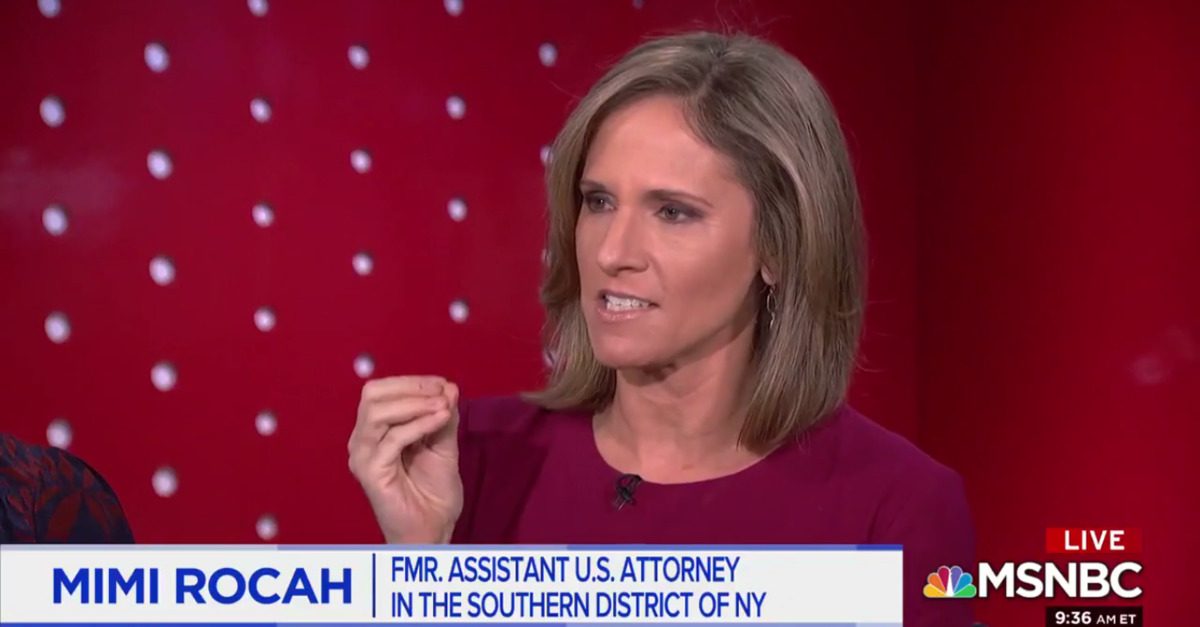 Breitbart News’s Joel B. Pollak spent Tuesday night getting dunked on by some of the most prominent legal analysts in America when an attempt to call out a former federal prosecutor’s analysis went wrong.

After news broke Tuesday that President Donald Trump had been briefed on the whistleblower complaint at the center of his impeachment hearings before releasing the military aid to Ukraine, former Assistant U.S. Attorney Mimi Rocah said the revelation was “what prosecutors call consciousness of guilt.”

“It’s very strong evidence that when he froze the money it was for an illicit purpose. Otherwise, why not keep it frozen and explain it was all on the up and up to fight ‘corruption,'” she tweeted.

“Wrong. This is not evidence of anything at all. Even assuming — for argument’s sake — that the President only released aid because he heard of the whistleblower’s complaint, federal rules of evidence bar ‘subsequent remedial measures’ from being used to prove ‘culpable conduct,’” Pollak responded.

Wrong. This is not evidence of anything at all. Even assuming — for argument’s sake — that the President only released aid because he heard of the whistleblower’s complaint, federal rules of evidence bar “subsequent remedial measures” from being used to prove “culpable conduct.” https://t.co/blgDmR9tHc

Rocah and other former federal prosecutors were quick to say this attempt to refute Pace Law School’s Distinguished Fellow in Criminal Justice was wrong in just about every aspect.

In short, the “subsequent remedial measures” rule which Pollak referenced is typically employed in civil cases, and is designed to ensure that a party can improve a hazardous condition without being concerned the improvement will be used as evidence of liability.

“Trying to tell a former prosecutor she’s wrong about crim law isn’t a good idea so please don’t mansplain to me. Putting aside that the FRE don’t apply here, what you’re talking about applies in a civil context when companies install safety equipment you can’t use that to argue they should be liable for accidents that occurred prior (so as not to discourage them from making safety improvements),” Rocah responded.

“In terms criminal context, evidence to fix what you did or cover it up can be powerful circumstantial evidence of guilt.”

argue they should be liable for accidents that occurred prior (so as not to discourage them from making safety improvements). In terms criminal context, evidence to fix what you did or cover it up can be powerful circumstantial evidence of guilt.

“This is like if you took a bar exam prep course and had the words randomly rearranged,” former federal prosecutor and CNN legal analyst Elie Honig said, adding, “This is mansplaining but it’s also idiot-splaining.”

This is mansplaining but it’s also idiot-splaining.

Preet Bharara, a former U.S. Attorney for the Southern District of New York who Trump fired, further demonstrated why Pollak’s argument was wrong.

What @joelpollak also doesn’t get is that this revelation is not only direct evidence of guilt. It also undermines a core Trump’s defense — that the $$ were released in the ordinary course. No evidentiary rule precludes that evidence. Or that rebuttal.

As did attorney and MSNBC legal analyst Katie Phang:

“I just can’t with this guy trying to use subsequent remedial measures in the same breath as bribery/extortion…Someone tell him this is not putting up a sign after a slip and fall…,” Phang said.

Several others entered the fray.

Yeah, @Mimirocah1 is right, of course, @joelpollak. The "subsequent remedial measures" rule applies to tort cases, not criminal cases, for what should be obvious reasons. You should stop embarrassing yourself by making points based on random tidbits of law you happen to recall. https://t.co/DqLV6IS5eL

Throwing the bag of money out the car window after robbing a bank because the cops are chasing you is not a “subsequent remedial measure.” https://t.co/86wf0gAuIF

This is quite an argument. From "let's not deter hospitals from improving their procedures b/c they're afraid of lawsuits" (policy rationale for 407) to "any evidence of consciousness of guilt is automatically inadmissible" in something that isn't even (yet) a trial. Nice try.

Boom! Feel free to reach out to me or any of her MSNBC colleagues next time you're thinking about tangling with @Mimirocah1 . we might be able to walk you back and spare you embarrassment. https://t.co/5722RizcSc

When you resort to the “stop mansplaining” defense, you’ve lost. https://t.co/a81dVMyglm

I disagree. Ninth Circuit at least (member, CA Bar) does not limit that rule to civil cases. Not sure any court would admit “doing his job” as “consciousness of guilt.” https://t.co/PwnOWNthMV

People commented on the “mansplaining” tweet, saying that Rocah had “posterized” and/or “roasted” Pollak.

That's weaker than "sticks and stones…" She schooled you so badly you were afraid to @ her. @Mimirocah1 just posterized you! pic.twitter.com/ijureW3PQS

Dude you got roasted!!

Pollak said no such thing occurred. He said by email that he was “right about the FRE, and the principle.”

“The fact that the rule is ‘typically’ used in civil cases does not rule out its use in criminal law — and we are not even in criminal law here because there is no underlying crime,” Pollak said.

He further said that his main point was not refuted.

“My point was that the president *doing his job* is not evidence of a guilty conscience,” he said.
“I don’t think anyone refuted that.”

“Instead you had a bunch of lefty legal types high-fiving each other. Whoopee,” Pollak added.

Editor’s note: this story was updated after publication to remove some unnecessary characterizations. A response from Pollak was also added.