In the wake of federal prosecutors tacking on even more charges against Full House actress Lori Loughlin, Mossimo Giannulli and other parents in the “Operation Varsity Blues” case, legal commentators were quick to call the move an overreach and a “shake-down.” In combatting the numerous charges, Loughlin and Giannulli, who have pleaded not guilty rather than entering into a plea agreement, may argue that they thought they were making legitimate charitable donations and were themselves victimized by William “Rick” Singer, the admitted mastermind of the college admissions scam.

A former federal prosecutor says, however, that this likely defense is undercut by “strong circumstantial evidence.”

Neama Rahmani, the President and co-founder of West Coast Trial Lawyers and former assistant U.S. attorney, told Law&Crime that the latest move by prosecutors was a clear effort by the government to apply “maximum pressure” on parents who have not yet pleaded guilty. Rahmani also said that the latest bribery charges appear “designed” to convince U.S. District Judge Indira Talwani that “the victims in this case (the universities and companies that administered the admissions tests) suffered a financial loss, which would significantly increase the parents’ sentencing guidelines if they’re convicted.”

This is notable because Talwani, one of the judges overseeing some of the “Varsity Blues” cases, has more or less rejected using the amount of money spent as a major basis for determining prison time. U.S. Attorney Andrew Lelling, on the other hand, has emphasized the importance of the amount of money involved for sentencing purposes.

In September, Judge Talwani issued an order that found the accused defendants-parents “did not ‘gain’ these amounts, but instead paid them to a co-conspirator.”

“Nor did the conspiracy as a whole gain these moneys,” the judge said. “Instead, the amounts were passed between the co-conspirators, and cannot stand in as an alternative measure for any loss incurred by the universities or testing companies.”

Rahmani said that while he expects Loughlin and Giannulli’s lawyers to argue that “they too were victimized by Rick Singer, because they thought they were making legitimate donations to USC,” it might be a “tough argument for the jury to believe, however, especially when there is evidence that Loughlin and Giannulli doctored photos and helped their daughters submit fraudulent admissions applications.” Here’s why.

At the center of the admissions scheme is the aforementioned Rick Singer, whose charity organization “The Key Worldwide Foundation” purported to help underprivileged students but amassed $25 million in bribes from privileged parents from 2011-2018. Here’s how authorities said these funds were used:

Bribing college entrance exam administrators to allow a third party to facilitate cheating on college entrance exams, in some cases by posing as the actual students, and in others by providing students with answers during the exams or by correcting their answers after they had completed the exams; Bribing university athletic coaches and administrators to designate applicants as purported athletic recruits regardless of their athletic abilities, and in some cases, even though they did not play the sport they were purportedly recruited to play thereby facilitating their admission to universities in place of more qualified applicants; Having a third party take classes in place of the actual students, with the understanding that grades earned in those classes would be submitted as part of the students’ college applications; Submitting falsified applications for admission to universities in the District of Massachusetts and elsewhere that, among other things, included the fraudulently obtained exam scores and class grades, and often listed fake awards and athletic activities; Disguising the nature and source of the bribe payments by funneling the money through the accounts of a purported charity, from which many of the bribes were then paid.

As you surely know by now, Loughlin and Giannulli are accused of creating fake rowing profiles to get their daughters Isabella Giannulli and Olivia Jade Giannulli into USC, “agree[ing] to pay bribes totaling $500,000 in exchange for having their two daughters designated as recruits to the [University of Southern California (USC)] crew team–despite the fact that they did not participate in crew.”

According to the original complaint, the defendants didn’t just take fake photos of their daughters on ergometers, the government also recorded their responses to Singer warning them of an “IRS audit”; they made sure their stories about payments were the same. 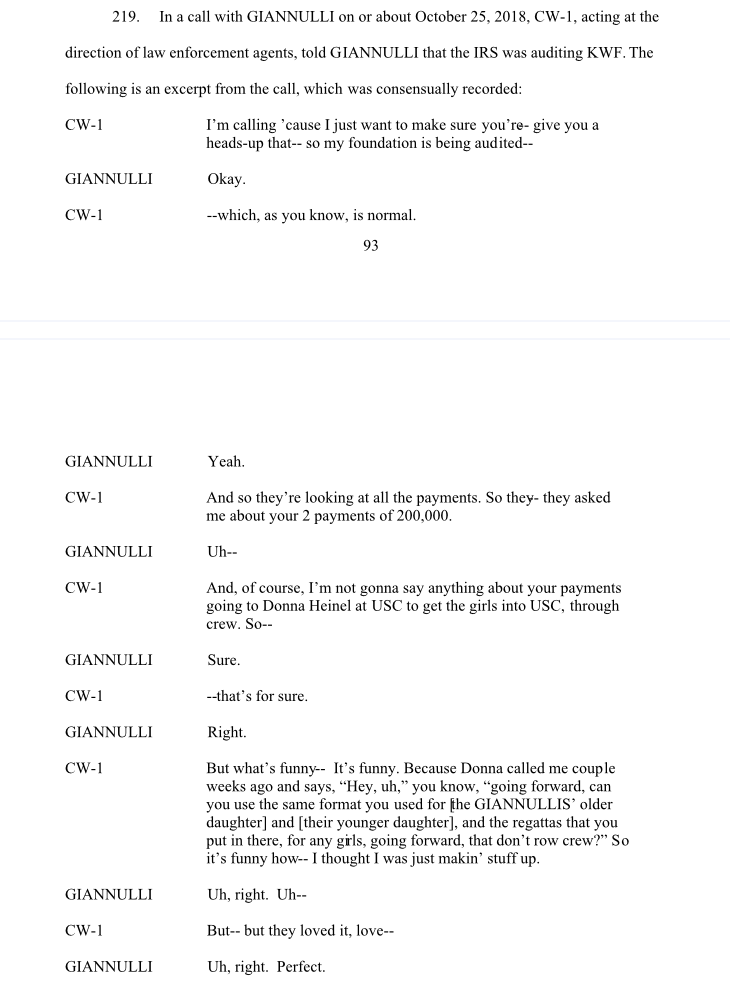 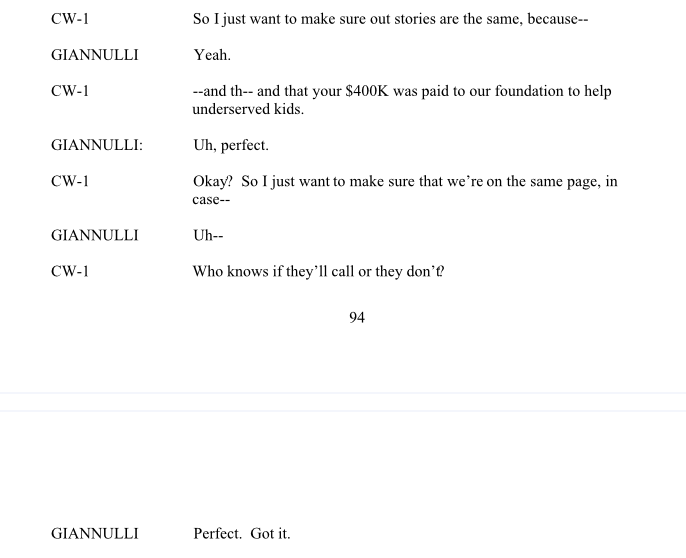 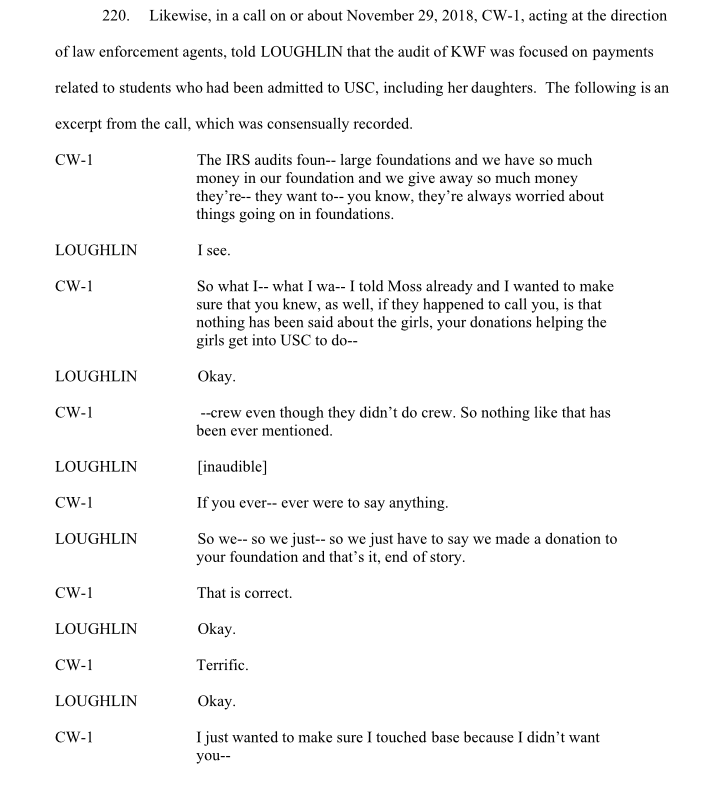 While the transcripts of the calls above don’t include a smoking gun admission that the defendants knew a crime was committed, prosecutors are going to use circumstantial evidence to show they “knew about the fraudulent conduct,” Rahmani said.

“Circumstantial and direct evidence are given equal weight,” he said. “The strongest circumstantial evidence of Loughlin and Giannulli’s guilt is Giannulli’s confiding to his accountant that he had to ‘work the system,’ sending Singer pictures of his daughters on a ergometer, informing his daughter’s high school counselor that his daughter was a coxswain and Loughlin asking Singer not to draw attention to this at her daughter’s high school, and and Loughlin not responding to Singer’s statement that her daughters don’t do crew.”

The “work the system” remark Rahmani referred to was highlighted in this week’s superseding indictment.

“This strong circumstantial evidence undercuts Loughlin and Giannulli’s assertions that their payments to Singer and USC were authentic charitable contributions instead of bribes to get their daughters admitted,” Rahmani said. “Parents that make legitimate donations to a university don’t send doctored pictures, tell others they ‘worked the system,’ and lie about their children participating in crew.” 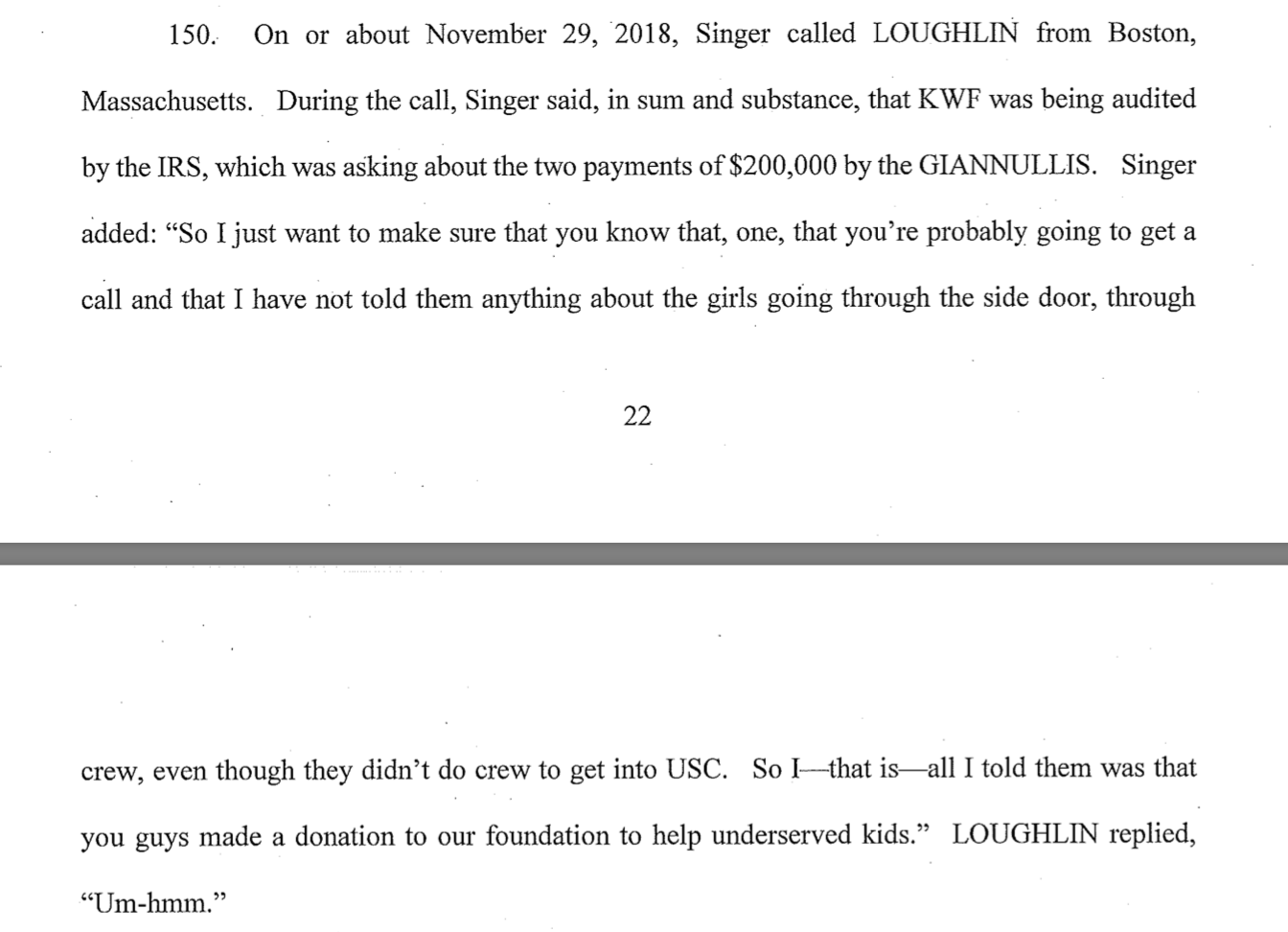