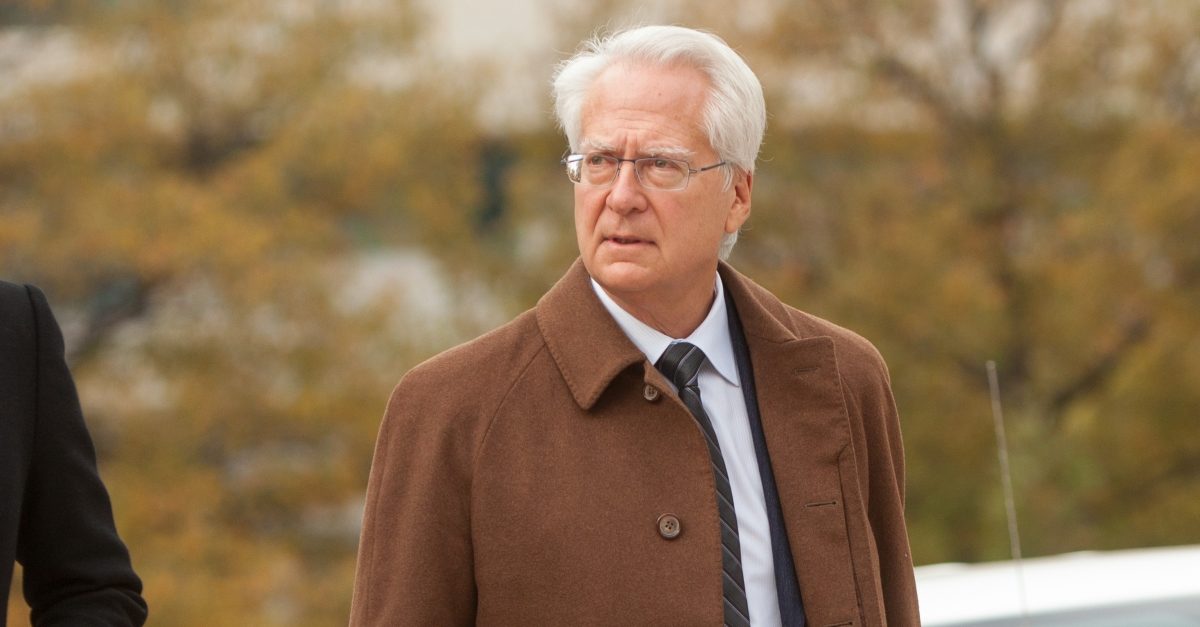 A federal appeals court on Friday suspended attorney and activist Larry Klayman, the founder of conservative legal organization Judicial Watch, from practicing in the D.C. Circuit Court. Klayman represented Judicial Watch but later turned around and litigated against the organization three times. That’s an ethics problem, the federal court ruled.

In a harshly worded 13-page opinion penned by Circuit Judge David S. Tatel, the U.S. Court of Appeals for the D.C. Circuit imposed a reciprocal 90-day suspension on the high-profile attorney who has represented Laura Loomer, George Zimmerman, and Joe Arpaio. Judge Tatel also referred Klayman’s case to the Committee on Admissions and Grievances for recommendations “on whether further discipline is warranted.”

Klayman, who founded Judicial Watch in 1994, was penalized by the D.C. Bar for violating Professional Conduct Rule 1.9, which says that “[a] lawyer who has formerly represented a client in a matter shall not thereafter represent another person in the same or a substantially related matter in which that person’s interests are materially adverse to the interests of the former client unless the former client gives informed consent.” The official comments under the rule (which are highly persuasive, but not binding) further suggest that attorneys who have been involved in a “specific transaction” should not represent other clients with “materially adverse interests.”

The underlying conduct involved three instances in which Klayman initially represented Judicial Watch in some capacity, then left the organization and represented clients against the group.

After the D.C. Board of Professional Responsibility found that Klayman had violated Rule 1.9, the District of Columbia Court of Appeals in June 2020 issued a suspension and ordered him to complete a continuing legal education course on conflicts of interest (Klayman told Law&Crime that he did take continuing legal education courses). But Klayman failed to notify the Circuit Court of his suspension with 10 days of that discipline as required, documents say: 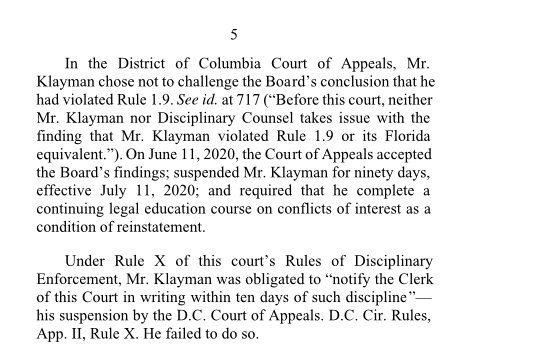 The D.C. Circuit Court then ordered identical discipline, which Klayman challenged with a series of legal filings arguing that such punishment was not warranted. The filings were not well received by the court.

Despite not seeking consent from Judicial Watch, Klayman claimed he was “ethically obligated” to represent the three clients because they “were unable to afford counsel” and would have otherwise “lost their legal rights.”

“This argument is entirely without merit,” wrote Tatel, a Bill Clinton appointee. Tatel added that Rule 1.9 “is absolute.”

Klayman also argued that because eight years had passed between the ethical infractions and the bar complaint filed against him, he suffered “undue prejudice” because he couldn’t produce sufficient evidence or witnesses to support his case. But according to the opinion, “when pressed at oral argument, Mr. Klayman was unable to explain how any of this—or indeed anything else—actually prejudiced him.”

“Mr. Klayman’s remaining arguments are equally without merit. He invokes the doctrine of laches but fails to cite a case from either this circuit or the D.C. Court of Appeals that applies laches to disciplinary proceedings, nor are we aware of one,” the court said. “Quoting the [Ronald] Rotunda letter, he claims that ‘Judicial Watch submitted boxes full of voluminous documents to the Bar Counsel’s office in secret’ and those documents were not served to ‘Mr. Klayman until the Petition was filed,’ but he provides no evidence of this alleged due process violation.”

Klayman is prohibited from practicing or holding himself out as being a licensed attorney in the D.C. Circuit for 90 days, beginning Friday.

Klayman disagreed with the court’s reasoning.

“The Ninth Circuit faced the same issues and imposed no discipline as I had already ‘served my time.’ In addition, the reasoning of my expert Ronald Rotunda, who was the leading professional ethics expert in the nation before he died, found that I had committed no ethics violation. He was not paid for his opinion and did so pro bono,” Klayman wrote in an email to Law&Crime. “Finally, I had filed a petition for rehearing en banc of the District of Columbia Court of Appeals ethics opinion, and believed in good faith that notifying any court was not required while this petition was pending. Moreover, I took no action for any of my few clients, whose appeals had already been briefed before the DC Circuit after the District of Columbia Court of Appeals issued its opinion.”

Klayman Order by Law&Crime on Scribd

Editor’s note: this story’s headline and lede were updated post-publication to make it clear that Klayman was suspended from practicing in the D.C. Circuit and to add details about the attorney’s plans to seek an en banc rehearing of Judge Tatel’s finding. We also added a line to reflect that Klayman said he took continuing legal education courses, rather than declining to do so.