Feds Will Recommend ‘Low’ Sentence for California Woman Who Admits She Ran Off with Ex-Boyfriend and Made Up Abduction Hoax: Docs 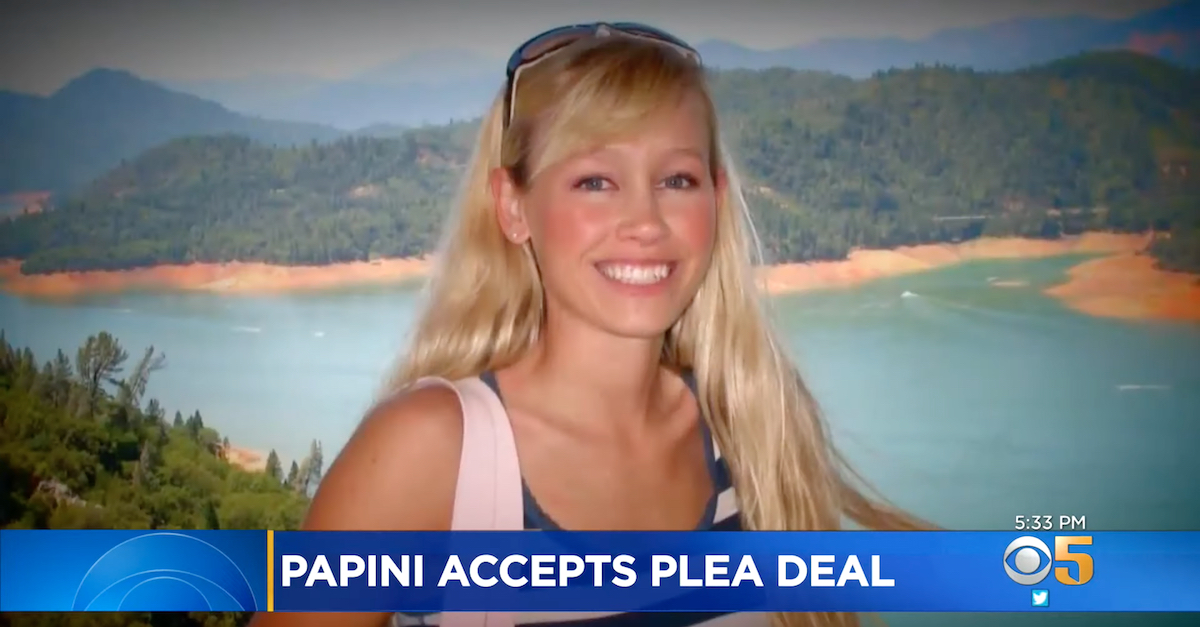 A Northern California wife and mother of two who was accused of faking her own kidnapping in 2016 has signed a guilty plea, according to federal prosecutors in California and documents obtained by Law&Crime.

Sherri Papini was charged with making false statements to a federal law enforcement officer and engaging in mail fraud, according to an affidavit attached to a criminal complaint and arrest warrant on file with the U.S. District Court for the Eastern District of California. According to the FBI, she faked her own kidnapping in November 2016 by disappearing “for several weeks” while a nationwide manhunt ensued. Her husband reported her missing around 5:50 p.m. on Nov. 2, 2016. Papini was 34 at the time.

Though a criminal complaint has been on file since March 3, 2022, federal prosecutors filed an additional information on Tuesday, April 12, under a separate docket number which alleged 35 separate counts — all but one of them involved mail fraud.  The final count was the aforementioned accusation that Papini made false statements to investigators.

A concomitant 14-page plea agreement says Papini will plead guilty to only one of the counts of mail fraud and the final count for lying to the feds. According to that document, the mail fraud count could result in a maximum penalty of “20 years of incarceration, a fine of $250,000 or twice the gross gain or loss, whichever is greater.” The false statements could net a maximum prison term of five years plus another quarter-million-dollar fine.

Papini will be allowed to argue that she can’t pay the fines when she’s ultimately sentenced, the document says. Federal prosecutors “will recommend that the defendant be sentenced to the low end of the applicable guideline range as determined by the Court” — which the parties “estimate” will likely result in a sentence of somewhere between eight and 14 months behind bars, according to the document.

The full plea agreement contains a short, two-page “factual basis” for the charges to which Papini is agreeing to plead guilty.

Sherri Papini’s signature appears on her April 12, 2022 plea agreement with federal prosecutors in the Eastern District of California.

According to the original March 3 criminal complaint, Papini’s husband used a cell phone tracking system to locate his missing wife’s phone and ear buds near where she purportedly went jogging on that date, the affidavit indicated.  He later said he “thought the cellphone had been placed, which he described as weird,” the affidavit continued.

When Papini reappeared to society, she claimed two Hispanic women had abducted her at gunpoint, according to the various court documents. The FBI employed a sketch artist to draw up composite images of the alleged attackers. Papini claimed the pair used “instruments” to “inflict injuries,” the affidavit indicates.

It turned out she was with her ex-boyfriend and had hurt herself to make it look like she’d been attacked, the feds alleged:

When warned that it was a crime to lie to the feds and confronted with evidence that the kidnapping story was a hoax, Papini dug in and refused to retract her story, the FBI alleged. 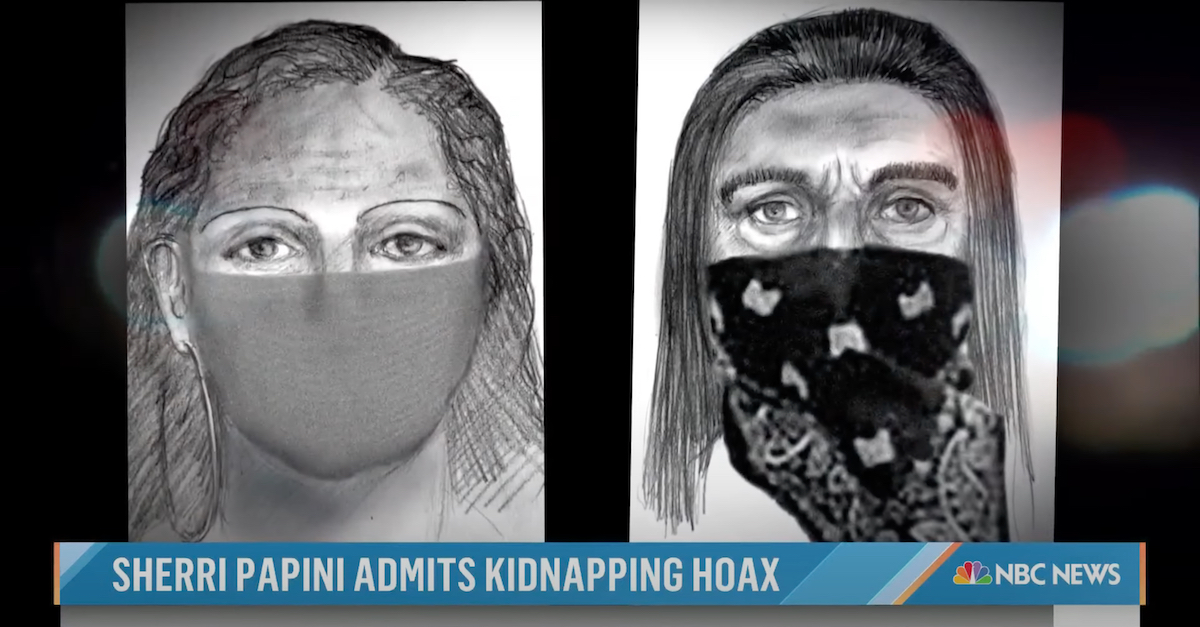 These two sketches show the two women Sherri Papini claimed abducted her at gunpoint. She now admits they were figments of her imagination — part of a total and elaborate hoax.  (Image via NBC News/Today screengrab.)

“In addition, PAPINI caused the California Victim’s Compensation Board (“CalVCB”) to pay over $30,000 in fraudulent victim assistance money based on her false kidnapping story, including reimbursements for therapy sessions, blinds, and ambulance services,” the affidavit indicates. “At least one of these reimbursements was via the U.S. mail.”

Two men, whose phone numbers were stored in Papini’s phone under women’s names, described Papini to the FBI in less than glowing terms, according to the affidavit:

Man 2 described PAPINI as an attention-hungry person who told stories to try to get people’s attention. Man 2 stated that PAPINI fabricated stories of being the victim of abuse from her family, father, and then Man 2 after the couple broke up.

Investigators learned that PAPINI had a previous marriage to Man 3. Husband told investigators that PAPINI married Man 3, who was in the military, to get medical insurance because of a heart murmur issue. PAPINI’s mother told investigators PAPINI traveled all over the world with her first husband. Investigators located Man 3 and interviewed him on November 14, 2016. Man 3 confirmed that he and PAPINI were married in 2006, prior to his deployment overseas, and stated it was because PAPINI needed health insurance due to complications related to regular egg donations. Man 3 stated that he and PAPINI never lived together and did not travel together, except for once when PAPINI visited Man 3 in Japan. When Man 3 returned from deployment, PAPINI told him she had found someone else and wanted a divorce, to which Man 3 agreed. PAPINI told Man 3 that her family abused her while growing up. After the divorce, Man 3 heard from mutual friends that PAPINI had a history of lying.

Investigators also interviewed several of PAPINI’s friends. These friends described PAPINI as being crazy and wild as a youth. The friends recounted that PAPINI used to run away and one described an incident in which PAPINI ran away from home at age 16 to Southern California and stayed with friends. Multiple friends also stated that PAPINI would make up lies, particularly about being the victim of abuse, especially as a youth.

The director of a youth program told the FBI that Papini “was good at creating different realities for people so that they would see what she wanted them to see, which got her really good attention,” according to the affidavit.

The now-admitted scheme began to unravel on Nov. 24, 2016, when motorists on Interstate 5 began calling 911 to report that a woman — Papini — was “standing or running in the middle of” the highway at 4:30 a.m., the FBI said. A truck driver was among those who stopped to render aid.

The scene of the discovery of Papini was in Yolo County, Calif, about 146 miles south or where she disappeared, the FBI wrote:

PAPINI had a chain around her waist that one arm was bound to, with additional bindings around her other wrist and each ankle. PAPINI was transported to Woodland Hospital where she underwent several physical examinations. She appeared to have lost a considerable amount of weight, and her long blonde hair had been cut much shorter. She had been branded on her right shoulder, although the exact content of the brand was indistinguishable. PAPINI’s nose was swollen, she had bruises on her face, rashes on her left arm and left upper inner thigh as well as other parts of her body, ligature marks on her wrists and ankles, burns on her left forearm, and bruising on her pelvis and the fronts of both legs. Toxicology results did not show any significant trace of narcotics in PAPINI’s system at the time of her return and a physical exam did not show evidence of sexual assault.

A DNA sample collected from Papini’s clothing pointed the FBI to the ex-boyfriend, the affidavit continued.

The full affidavit is 55 pages long; it outlines the case in greater detail than several of the other documents on file.

According to other court papers, the feds also moved against a GoFundMe account, which was set up to support Papini.  The fundraising page is no longer active.

Papini, now 39, released an apology through her attorney, according to CNN and the Sacramento Bee.

“I am deeply ashamed of myself for my behavior and so sorry for the pain I’ve caused my family, my friends, all the good people who needlessly suffered because of my story and those who worked so hard to try to help me,” the statement reportedly said. “I will work the rest of my life to make amends for what I have done.”

Read the original criminal complaint, the information, and the plea agreement below: