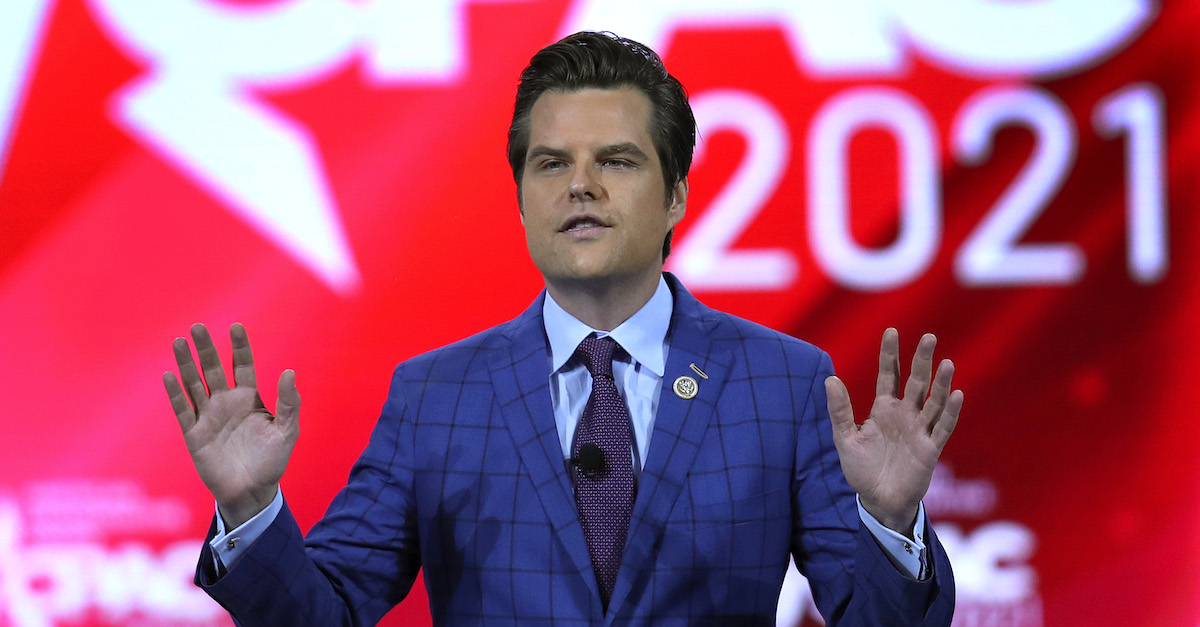 Federal authorities probing Rep. Matt Gaetz are attempting to turn one of his former girlfriends against him, as investigators seek to secure the cooperation of a former Capitol Hill intern who previously dated the Republican lawmaker, CNN reported Tuesday morning.

According to the report, investigators believe the unidentified girlfriend accompanied Gaetz and several others on a 2018 trip to the Bahamas that stands at the center of the probe into whether the Florida congressman violated federal sex trafficking laws and had sex with a minor. The probe has focused on whether women were paid to travel and have sex with Gaetz and his cohorts in the Bahamas and whether the purpose of the trip was to illegally influence the congressman. The former girlfriend—who did not work in Gaetz’s office in Washington—is believed to have “knowledge of drug use and arrangements with women,” several people said to be familiar with the investigation told CNN.

The report comes as former Florida tax collector and Gaetz associate Joel Greenberg has pleaded not guilty to 33 criminal charges that include counts of sex trafficking of a child, wire fraud, and conspiracy to bribe a government official. Greenberg is expected to formally enter into a plea deal to cooperate with authorities. Greenberg’s attorney last month insinuated that if his client were to reach an agreement with prosecutors it could involve providing some kind of damaging information about Gaetz.

Sources familiar with the investigation told CNN that information about the Bahamas trip from Greenberg and Gaetz’s former girlfriend will likely be critical as the Justice Department’s public integrity section reaches a decision about whether there is sufficient evidence to pursue a prosecution against Gaetz.

“The cooperation of Greenberg and the former girlfriend could be among the final steps in the probe of Gaetz. Investigators view both as crucial to understanding the relevance of hundreds of transactions they have obtained records of, including those involving payments for sex,” the report stated. “The ex-girlfriend could also be questioned by investigators about a second woman as they try to determine whether Gaetz may have slept with that woman when she was only 17.”

Gaetz, who has not been charged in the matter, has denied wrongdoing, denied seeking a pardon from Trump, claimed he is the victim of an extortion plot, and blamed Attorney General Merrick Garland for an investigation that began when Bill Barr served in that role. Gaetz said he has never paid for sex and he claimed that the last time he had a sexual relationship with a 17-year-old was when he was 17. He also set his Venmo transaction history to private.

A Gaetz spokesperson told CNN that its “story” was “simply a regurgitation of the same falsehoods you’ve been peddling for two months now without a shred of evidence or a single on-record accuser.”