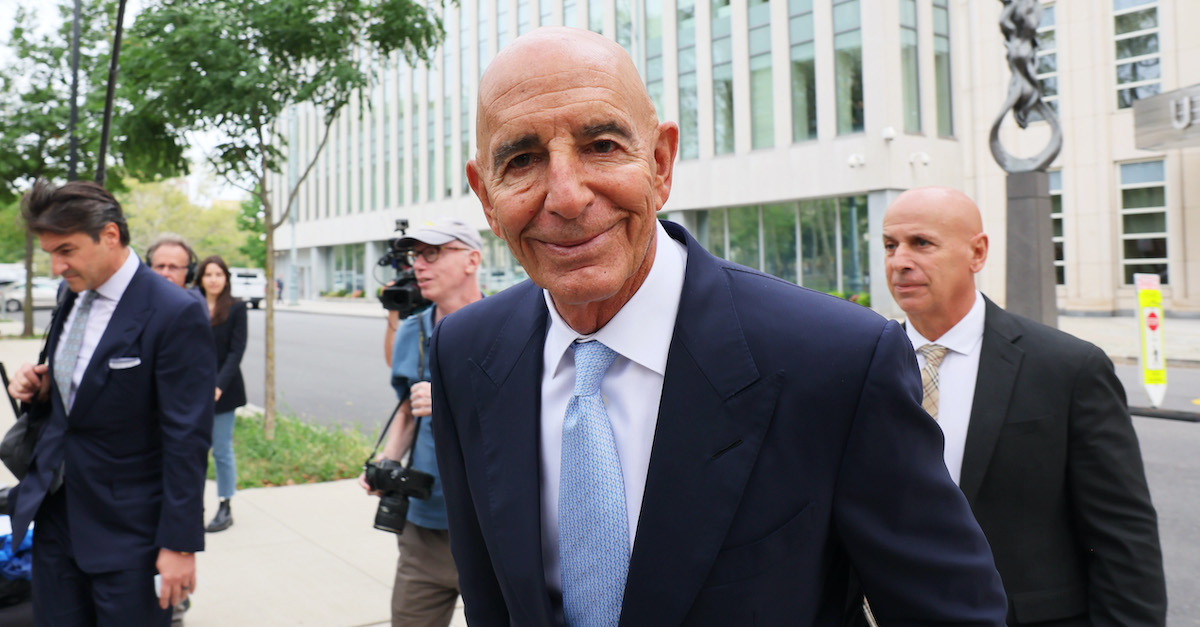 Tom Barrack, a former advisor to former president Donald Trump, leaves U.S. District Court for the Eastern District of New York in a short recess during jury selection for his trial on Sept. 19, 2022 in the Brooklyn borough of New York City. (Photo by Michael M. Santiago/Getty Images)

The verdict marks a decisive defeat for the Department of Justice, which indicted Barrack and his employee Matthew Grimes in July 2021. Both were cleared of the charges against them. The conduct at issue over the trial took place before and during the Trump administration but was not prosecuted until after Joe Biden’s election.

Prosecutors claimed that Barrack, the wealthy founder of Colony Capital, exploited his “unique access” to Trump in order to “gain power and money.” He was charged under the same statute used against Russian agent Maria Butina, and the government alleged that he spread pro-UAE messages to the news media and the Trump White House, seeking massive investment’s from the oil-rich country’s sovereign wealth funds.

During the time period the government claims he acted as a foreign agent for the UAE, Barrack advocated foreign policy positions in the Trump White House favorable to Qatar, that country’s adversary.

Though the Justice Department said Barrack did not file a single-page lobbying form with the attorney general, his lawyer noted that the tycoon submitted some 200 pages of financial disclosures during his tenure inside the Trump administration.

Barrack reportedly tried to play down those Trump ties before the New York City jury, testifying that supporting the former president proved “disastrous” for his business. His defense team also criticized the Trump campaign’s proposed ban on all Muslim immigration.

Barrack invoked his Lebanese heritage as an explanation for an email he sent to his accused co-conspirator Rashid Al Malik — who remains at large. In the email, Barrack praised his own recent TV appearance, in which Barrack commended the UAE, by saying he “nailed it” for the “home team.”

His attorney recast the remark as Barrack’s expression of pride in his Middle East heritage and an implicit rebuke to Trump’s anti-immigrant policies.

“We are a nation of immigrants, where people can love America and the land that they are from,” Schachter said at the start of trial.

The Justice Department declined to comment, but ex-federal prosecutor Mitchell Epner called the verdict a “tremendous victory” for Barrack and Grimes.

“It is also a huge loss for the EDNY and the reputation of the DOJ as a whole,” added Epner, who is now a partner at Rottenberg Lipman Rich PC. “The DOJ’s near-perfect record of convictions in high-profile political cases is a major reason why many defendants plead guilty, rather than fight through trial. A loss like this may embolden other targets of the DOJ to take their chances on a trial, rather than plead guilty and cooperate.”

“For example, I would expect that FPOTUS’s supporters are encouraging those under investigation to take this verdict as a reason to ‘hang tough,'” Epner added, using the shorthand for former President Trump.

Indeed, Trump used the occasion of the acquittal to take a victory lap via Save America, his political action committee.

“My great respect goes out to the jurors for their courage and understanding in coming to an absolutely correct decision,” Trump wrote, following up with a list of investigations and cases — against him, other supporters, and allies — that he would like to see defeated. “This could be the beginning of our breakaway from Communism, and other very deep and dark places where the United States should never be.”

Foreign lobbying cases, in particular, have proven to be difficult prosecutions for the Justice Department. Even after securing a conviction against Michael Flynn associate Bijan Kian, a federal judge overruled it — finding that the evidence could not sustain the jury’s guilty verdict. A federal appeals court reinstated that verdict against Kian, a former Trump transition team member, noting that illegal lobbying cases thrive on sub rosa activities.

“Savvy operatives cover their tracks,” the Fourth Circuit noted in that 2021 ruling.

In 2019, another jury acquitted former President Barack Obama’s White House counsel Greg Craig of lying about the work he did for the Ukrainian government.