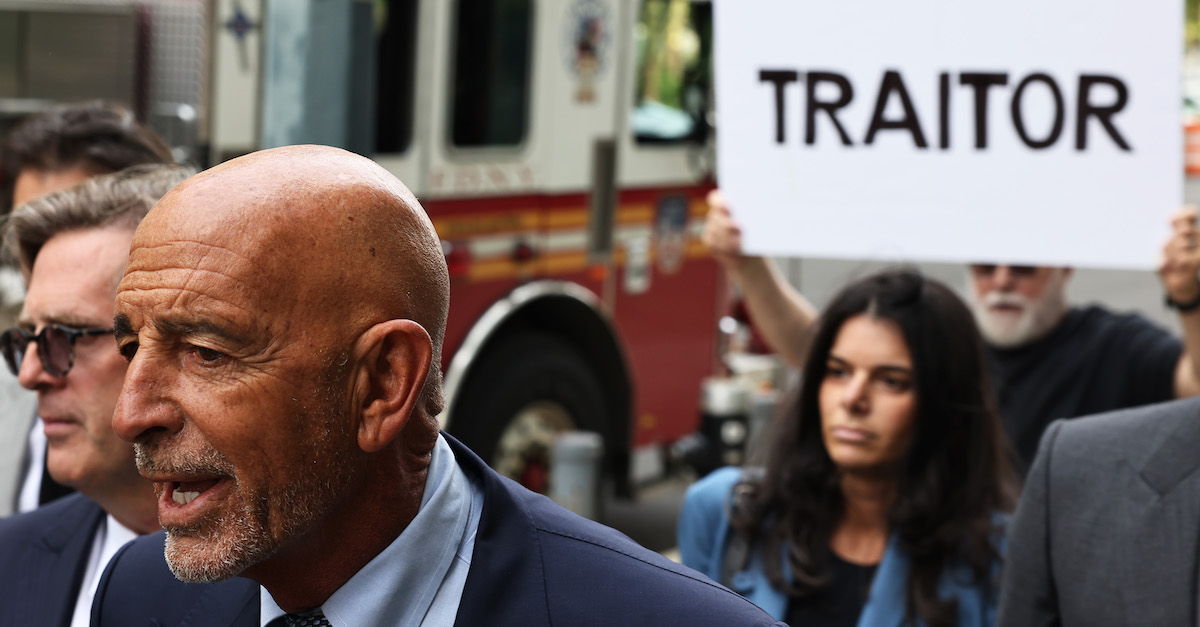 In his first federal court appearance in the Eastern District of New York, billionaire Tom Barrack pleaded not guilty on Monday to acting as an unregistered agent of the United Arab Emirates government and lying to the FBI about it.

The former chairman of Donald Trump’s inaugural committee, Barrack was indicted last week of using his clout within the Trump administration to push the UAE’s “wish list” within the U.S. government and in influential news outlets. He is also accused of obstructing justice by lying to federal agents during an interview of June 20, 2019.

Before entering federal court in Brooklyn, Barrack was pursued by a man holding a placard with the word “TRAITOR” in black block caps. Hecklers carried the same message for fellow Trump loyalists Paul Manafort and Roger Stone during their trials, CNBC noted.

As noted in the Mueller Report, that is not all that trio has in common.

Barrack and Stone are the men credited with recommending Manafort to Trump’s campaign team.

“Barrack suggested to Trump that Manafort join the Campaign to manage the Republican Convention,” the Mueller report states. “Stone had worked with Manafort from approximately 1980 until the mid-1990s through various consulting and lobbying firms.”

After Barrack repeatedly praised the UAE on national television on July 18, 2016, the billionaire told his accused co-conspirator Rashid Al-Malik in an email that he “nailed it” for the “home team,” referring to the UAE, not the United States, according to the indictment.

Prosecutors say that Al-Malik—a UAE national whose full name is Rashid Sultan Rashid Al Malik Alshahhi—fled the United States three days after being interviewed by law enforcement in April 2018 and remains at large.

Matthew Grimes, an Aspen, Colorado resident who worked for Barrack’s company Colony Capital, was arrested on the same day as his former boss and also pleaded not guilty.

Late last week, U.S. Magistrate Judge Patricia Donahue approved a package allowing Barrack’s release that was previously agreed to by the defense and prosecution that included a $250 million bond secured by $5 million in cash. That cash, the amount he actually had to pay, represents an estimated 0.5-percent of the billionaire’s reported net worth.

Those plans were delayed in the lead-up to a bail hearing. Judge Donahue initially signaled a reluctance to grant pre-trial release to Grimes, citing a “very serious” risk of flight. Barrack sought to postpone their detention hearing after that, leading to the billionaire’s three-day jail stint before his current release.