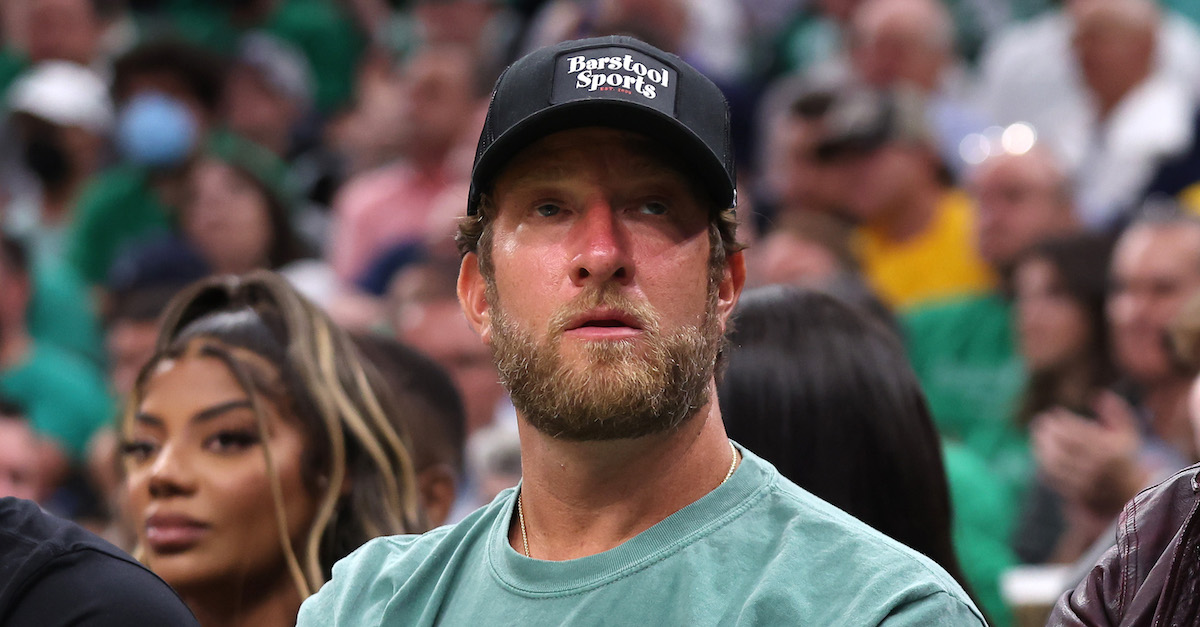 Barstool Founder Dave Portnoy looks on in the second quarter during Game Three of the 2022 NBA Finals between the Boston Celtics and the Golden State Warriors at TD Garden on June 08, 2022 in Boston, Massachusetts.

The founder of a website known for crass and degrading content that often veers into harassment, racism, and misogyny has lost his defamation claim against an online media organization that published multiple reports of women accusing him of violent sexual misconduct.

A federal judge in Massachusetts dismissed the defamation case by David Portnoy, the founder of Barstool Sports, against the online media organization Insider, Inc., in a 21-page ruling issued Monday.

As Law&Crime previously reported, Portnoy sued in February over Insider reports in which three young women claimed that sexual encounters with Portnoy that were initially consensual eventually devolved into something decidedly more disturbing. A piece published on Nov. 4, 2021, ran with the headline: “‘I was literally screaming in pain’: Young women say they met Barstool Sports founder Dave Portnoy for sex and it turned violent and humiliating.”

In Monday’s ruling, Chief U.S. District Judge F. Dennis Saylor said that Portnoy had failed to “clear [the] high bar” of showing Insider acted with actual malice, which is a necessary element of proving a defamation claim against a public figure.

Portnoy had argued that Insider published its reports on dates that matched the earnings announcements of Penn National Gaming, which owns a 36% stake in Barstool. He also said that Insider employees allegedly contacted Barstool advertisers shortly following publication of the first report and encouraged them to stop doing business with Portnoy.

“Such allegations of animosity or ill will, however, do not suffice to plead actual malice,” wrote Saylor, a George W. Bush appointee.

Saylor was similarly unconvinced by Portnoy’s argument that Insider used its stories about Portnoy to boost its own subscription revenue.

“[T]he fact that defendants published the articles behind a paywall, and that they sought to increase revenue by publishing the stories, does not give rise to an inference of actual malice,” Saylor wrote.

Saylor noted that Portnoy himself acknowledged in text messages between himself and at least one of the women in the Insider report that their sexual encounters involved a degree of violence.

“[Portnoy does not] dispute that one of the women told him that she injured her rib during one of their sexual encounters, and that she allegedly ‘boasted to [him] that he “still holds [her] title for most aggressive sex,'” Saylor wrote (citations omitted). “Thus, ‘the complaint . . . itself point[s] to undisputed facts that preclude [the Court] from inferring’ that the women’s accounts of violent, unenjoyable sexual encounters with plaintiff ‘would have seemed so implausible as to cast doubt’ on defendants’ belief that they were true.'”

Portnoy’s own complaint, the judge wrote, doesn’t support any allegations that Insider acted with the requisite state of mind to prove defamation.

“The complaint does not allege that Insider’s anonymous sources were fake, or that the articles misrepresented what the women told defendants,” Saylor wrote (citations omitted). “Furthermore, plaintiff admits that Insider investigated its first article for months, requested an interview with him, sought his comment before publication, included his denials, and hyperlinked to his press conference and his lawyer’s full denial letter, thus ‘undercut[ting] any inference of actual malice.'”

The judge also noted that even if Insider “knowingly relied on biased sources,” the articles themselves “make clear — and plaintiff does not deny — that defendants corroborated the women’s accounts with photographs, text and social media messages, videos, medical reports, police documents, an Uber receipt, and statements from at least three friends who saw or spoke with the women soon after their interactions with plaintiff.”

Saylor also dismissed Portnoy’s invasion of privacy claim, agreeing with Insider’s argument that Portnoy’s “troubling behavior towards much younger women . . . is part of ‘the broader social context’ of the #MeToo movement.” Portnoy had argued that because none of the women were his employees or had any “hierarchical” relationship with him, they cannot be part of the “#MeToo movement” and are, indeed, a matter of legitimate public cnocern.

“The Court declines to adopt that narrow view of newsworthiness,” Saylor wrote. “Issues of consent and power imbalance in sexual relationships are very much matters of current public concern, and the legitimate public interest in those issues is not limited to matters that arise only in the employment context.”

Insider has steadfastly defended its reporting on Portnoy.

“Our reporting on Dave Portnoy was careful, fair, and accurate,” a spokesperson for Insider told Law&Crime in an email on Monday. “We are pleased and gratified that the judge dismissed his complaint.”

Representatives for Portnoy did not immediately respond to Law&Crime’s request for comment.

Portnoy has previously successfully defended himself against a defamation claim brought by actor Michael Rapaport, who sued Portnoy and Barstool after Barstool employees called Rapaport, among other things, a “herpes-ridden fuck” and “herpes-having motherfucker.” That claim was dismissed in March of 2021.

In June of that year, the Massachusetts Supreme Court upheld a dismissal of a lawsuit against Barstool brought by Somerville Mayor Joe Curtatone after Barstool podcaster Kirk Minihane recorded and published an interview with the mayor in which Minihane had pretended to be a reporter from the Boston Globe.

You can read the judge’s ruling here.