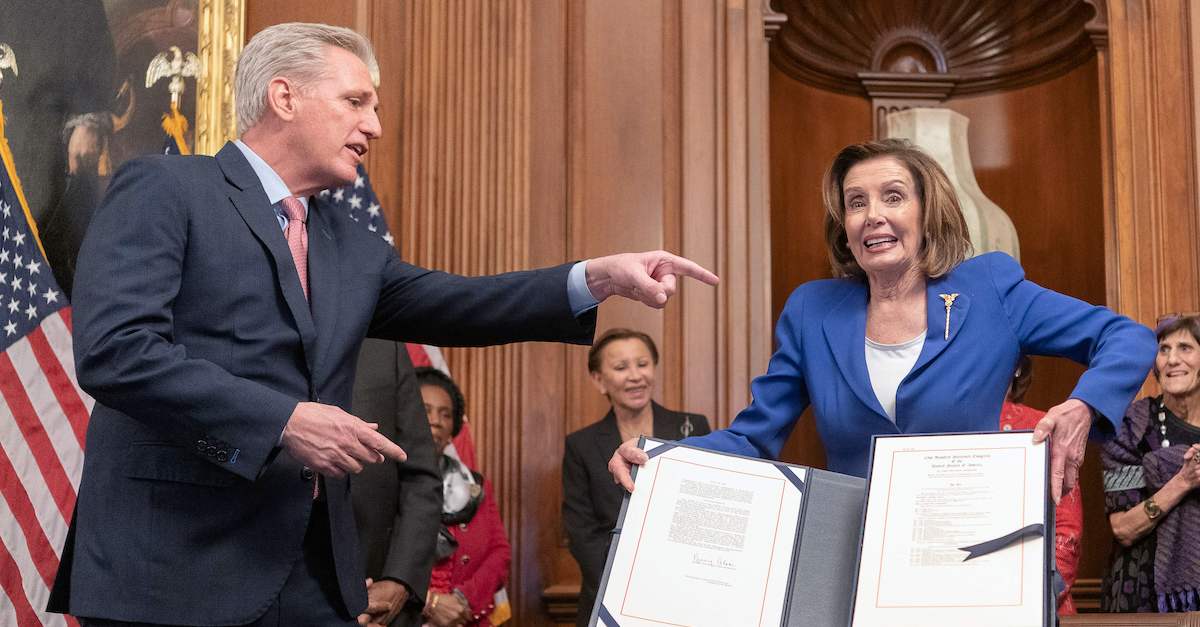 A federal appeals court in Washington, D.C. on Tuesday shot down House Republicans’ lawsuit challenging the constitutionality of the chamber’s pandemic-related proxy voting rules, reasoning that the court did not have jurisdiction to settle a fight over congressional rules.

Led by Minority Leader Kevin McCarthy, 20 Republicans in May sued Speaker Nancy Pelosi, claiming that the House proxy voting procedures were unconstitutional and antithetical to the Founders’ vision of how lawmakers would interact when enacting legislation. Under the measure, lawmakers unable to travel to Washington, D.C. amid the pandemic were allowed to designate another member of the chamber as their proxy, empowering that representative to cast votes on their behalf, provided that the designator gave the proxy “exact instructions” for each vote.

“In order for a Member to designate another Member as a proxy for purposes of section 1, the Member shall submit to the Clerk a signed letter (which may be in electronic form) specifying by name the Member who is designated for such purposes,” Section 2(a)(1) of H. Res. 965 prescribed.

The resolution passed the chamber on a strictly party-line vote, with no Republicans voting in its favor.

A three-judge panel on the U.S. Court of Appeals for the D.C. Circuit unanimously agreed that the lawsuit was barred by the Speech and Debate Clause of the U.S. Constitution, upholding an earlier ruling by a federal district court judge.

“The central object of the Speech or Debate Clause is to protect the ‘independence and integrity of the legislature,’” Circuit Judge Sri Srinivasan, a Barack Obama appointee who replaced Merrick Garland as the D.C. Circuit’s chief judge, wrote for the majority. “The Clause does so by preventing intimidation of legislators by the Executive and accountability before a possibly hostile judiciary.”

According to the panel, the Speech and Debate Clause was aimed at preventing the other branches of government from doing exactly what the GOP-Plaintiffs sought to achieve—having the judiciary weigh-in on the day-to-day procedures concerning how Congress enacts legislation.

“Here, the acts presented for examination are quintessentially legislative acts falling squarely within the Clause’s ambit. The challenged Resolution enables Members to cast votes by proxy, and the ‘act of voting’ is necessarily a legislative act—i.e., something ‘done in a session of the House by one of its members in relation to the business before it,’” the ruling stated. “Indeed, we are hard-pressed to conceive of matters more integrally part of the legislative process than the rules governing how Members can cast their votes on legislation and mark their presence for purposes of establishing a legislative quorum.”

The panel further reasoned that because the court lacked jurisdiction over the matter, there was no need to address the merits of House Republicans’ claims.

“Because we agree with the district court that the [Speech and Debate] Clause bars consideration of the plaintiffs’ suit, we have no need to consider whether they have standing,” Srinivasan concluded.

Despite their inability to garner support from the staunchly conservative Judge Walker, attorney Elliot S. Berke, who represented House Republicans in the matter, said they planned to appeal the case to the Supreme Court.

“We are obviously disappointed in the DC Circuit’s opinion but look forward to petitioning the Supreme Court for review later this summer,” Berke wrote in an email to Law360.

Berke did not immediately respond to an email from Law&Crime.