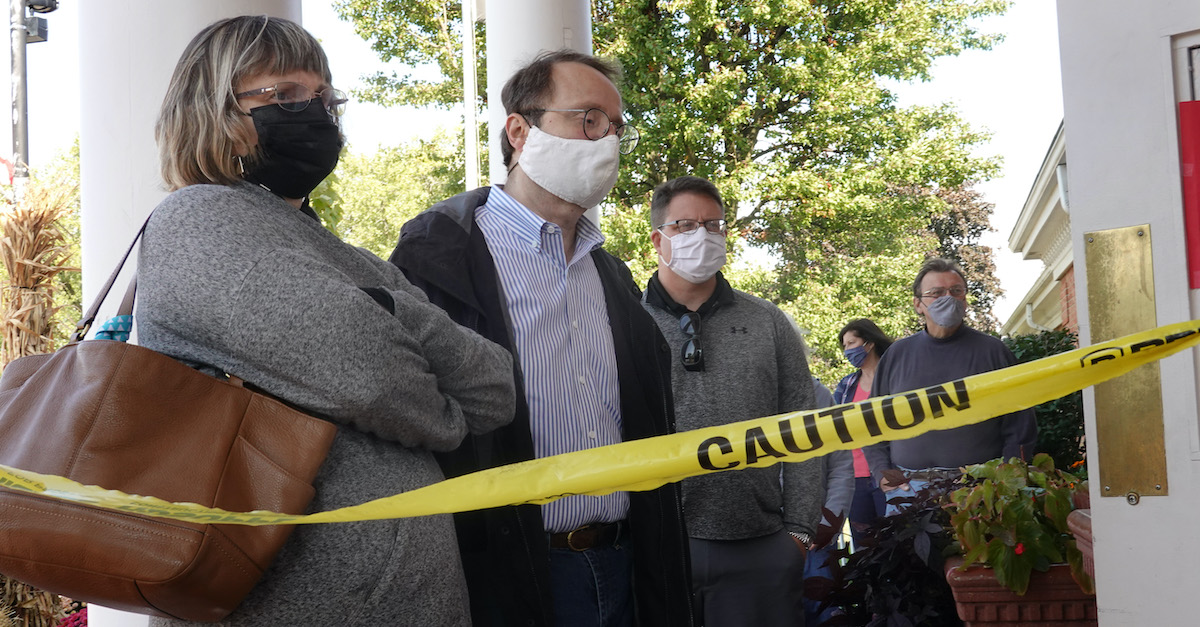 Residents wait in line to vote at the Munster Town Hall on Oct. 6, 2020 in Munster, Indiana.

The Seventh Circuit’s three-judge panel overturned a narrow part of the injunction that merely restated federal procedures for removing registrants from the state voter rolls.

In 2017, the Brennan Center filed a lawsuit on behalf of the Indiana branches of the League of Women Voters and the NAACP challenging the Senate Enrolled Act 442.

The rights groups alleged that the law would lead to purges violating the National Voter Registration Act by eliminating requirements to provide a notice and waiting period for a group of voters flagged as having moved out of state.

After the rights groups succeeded in blocking that statute, Indiana Republicans passed a new law amending it known as Senate Enrolled Act 334.

In an opinion authored by U.S. Circuit Judge Diane Wood, Monday’s ruling found that the more recent legislation “reestablishes the precise scheme we found wanting” in the first ruling on the case.

Barbara Bolling-Williams, the president of the Indiana State Conference of the NAACP, noted that the appellate court victory comes four years into the lawsuit.

“The laws Indiana passed in 2017 and 2020 risked improper purges of Indiana voters, particularly Black and brown voters,” Bolling-Williams wrote in a statement. “This decision is a win for democracy and racial justice.”

Linda Hanson, the co-president of the League of Women Voters of Indiana, echoed that sentiment.

“Voter rolls need maintenance, but that work must be done reasonably and with care so that voters’ rights are protected,” Hanson wrote in a statement. “Indiana’s purge law would have put eligible voters at risk of being dropped from the rolls. That’s wrong. Indiana’s voters deserve better.”

Monday’s ruling joins a string of other judicial victories by the rights groups.

Just less than a year after the filing of the lawsuit, U.S. District Judge Tanya Walton Pratt blocked SEA 442 in June 2018, in a ruling affirmed on appeal a year later.

In March 2020, Gov. Eric Holcomb (R)—who ascended to his Indiana post after his predecessor Mike Pence became Donald Trump’s vice president—amended the blocked legislation with SEA 334, which the groups complained still allowed purges without direct contact with the voter, notice or a waiting period.

That July, the rights groups filed a motion for summary judgment blocking that new law as well and prevailed in the lower court.

The three-judge panel found on Monday that 334 merely propped up the prior scheme.

Holcomb’s office referred a press inquiry to the office of Indiana’s secretary of state, which replied: “We are reviewing the ruling.”

Overturning a narrow part of the lower court’s ruling, the Seventh Circuit vacated only the parts of the injunction blocking provisions of the statute that restate the federal law’s procedures.

Those provisions “merely restate the NVRA’s procedures for removing a registrant from a state’s voter list: they provide that a county official may remove a voter from Indiana’s voter roll only if the official determines that the registrant authorized cancellation of his or her registration; if not, then the official must send notice to the registrant,” the court found.

Judge Wood, the lead author, was appointed by Bill Clinton.