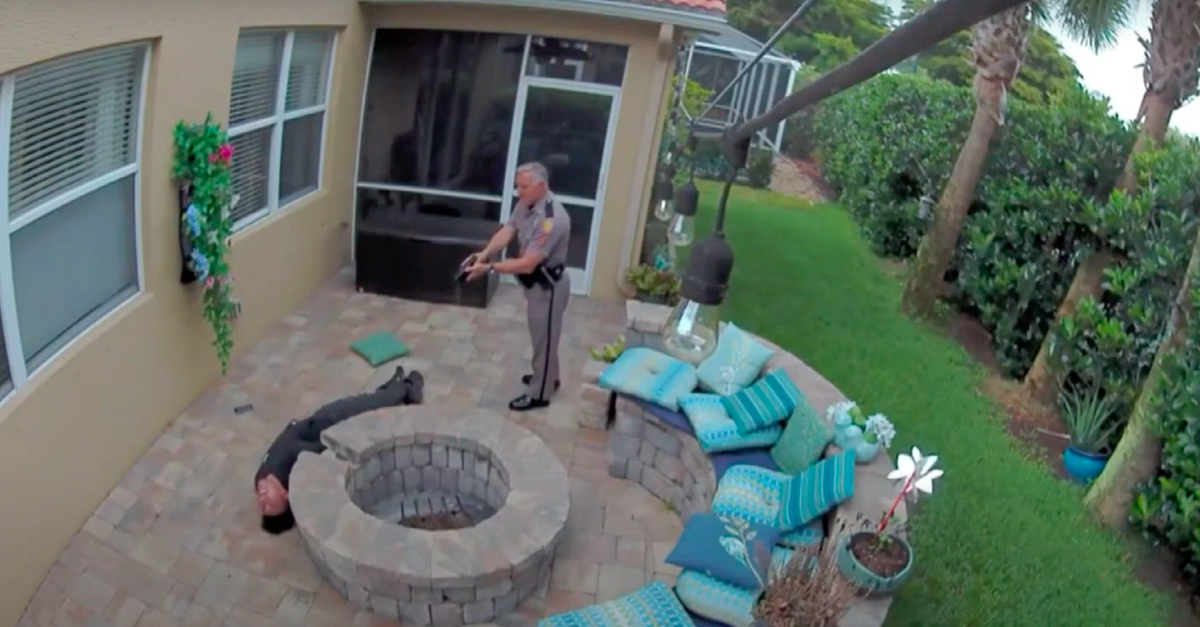 A Florida state trooper is being accused of racial profiling after he was captured on a backyard security camera repeatedly tasing and then arresting a biracial teen who was visiting his girlfriend.

Footage of the incident, which took place in Fort Myers on June 16, shows Trooper George Smyrnios with his Taser drawn as he approaches 16-year-old Jack Rodeman, who was standing outside of his girlfriend’s house.

At the start of the video currently available online, Smyrnios can be heard telling Rodeman to put his hands behind his back. The boy tells the trooper that his girlfriend is about to come outside, saying “I didn’t do nothing.”

“I told you to do something; turn around,” Smyrnios says.

“I need to call her,” Rodeman responds. Seconds later, Smyrnios fires the Taser at the boy, who drops to the ground and starts screaming for the trooper to stop. Smyrnios again tells the boy to put his hands behind his back, warning that he will shock him once more, which he immediately does. Rodeman again screams in pain then rolls on his stomach and places his hands behind his back.

As Smyrnios is cuffing Rodeman, the boy’s girlfriend exits the house and unsuccessfully tries to intervene.

After cuffing the child, Smyrnios can be heard saying, “For some reason, you think you can do exactly what you want to do — and you can’t.”

“No, I’m sorry,” Rodeman responds while his girlfriend looks on with her hands covering her face.

Rodeman was taken into custody and charged with loitering, possession of marijuana, and disobeying an officer.  The latter charge, which currently appears on a public court docket, is a second-degree misdemeanor, the docket indicates.

According to a report from Fort Myers CBS affiliate WINK, which obtained a copy of the arrest report, Smyrnios said that he began following Rodeman because the boy looked “suspicious” because he was wearing all-black clothing. The report also claimed that Rodeman “darted” into the bushes to hide when he saw the patrol car. If that happened, it happened prior to the footage currently available and outside the view of the camera.

The Washington Post reported that Smyrnios filed an amended report saying that he could not see Rodeman’s hands and was concerned the teen might have a gun. In the video, Rodeman appears to have both of his hands on his cell phone, though his back is turned to the camera when the recording begins.  Rodeman’s right shoulder is turned toward Smyrnios.

Multiple reports stated that Rodeman will remain in juvenile detention for 21 days.

Kris Rodeman, Jack’s mother, told USA Today that she “has no doubt” that her son was racially profiled and said she plans on taking legal action.

“I’m going after him for excessive force,” she said of Smyrnios. “I’ve read about things they have to follow or abide by also and from what I’m seeing he had no right to do that. They have rules they have to go by, too. I don’t want this to happen to another child.”

Her attorney, Derek Tyler, told the Washington Post that what Smyrnios did amounted to “torture of a child with no justification.”

Smyrnios was named Investigator of the Year in 2020. He is one of three triplets, all of whom are Florida state troopers.

Court records, which describe the defendant as “white,” indicate that he pleaded not guilty.

Read the case file as it exists as of the time of this writing: