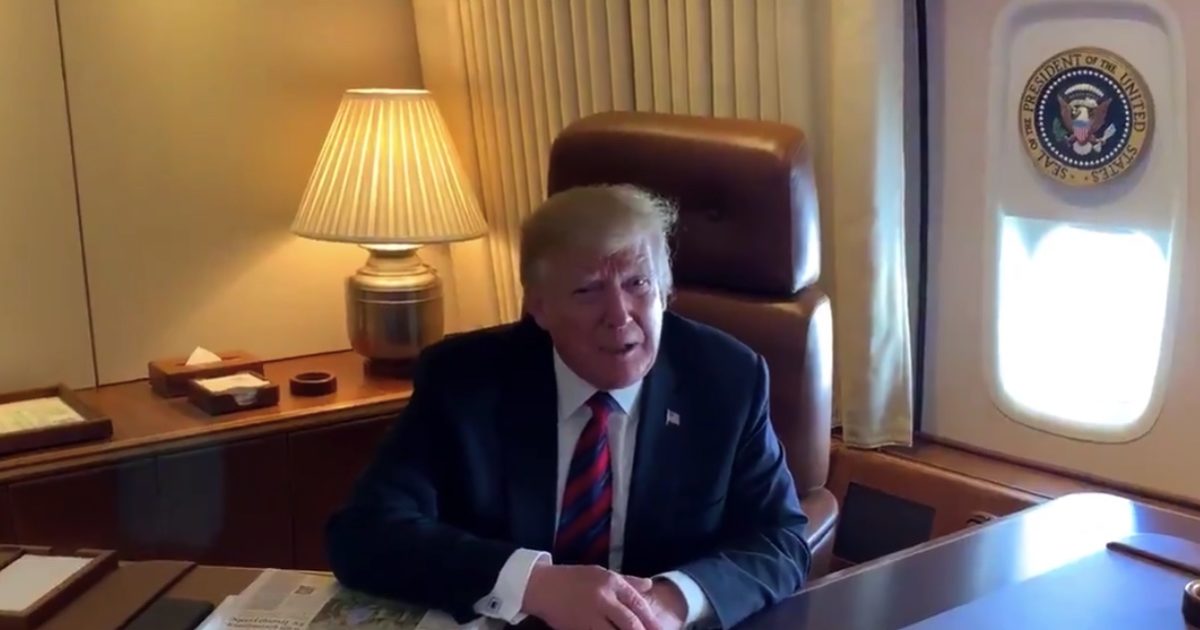 President Donald Trump filmed a brief video from his office on Air Force One Thursday, deriding New York City mayor and newly announced presidential candidate Bill DeBlasio, calling him “the worst mayor in the history of New York City.” Trump made the campaign-related video while on his way to New York for a campaign fundraiser and posted it to his official Twitter account.

In the video, the presidential seal is prominently displayed just above the window to the left of Trump, lending priceless gravitas to Trump’s screed against a possible future election opponent.

After it was posted online, the Citizens for Responsibility and Ethics in Washington (CREW), a Washington, DC based watchdog group, responded by tweeting: “Nice political ad filmed on Air Force One. You now legally need to reimburse the Treasury for the use of Air Force One on a political trip. Since you had no problem tweeting out the video, you should have no problem tweeting out the receipts when you reimburse the taxpayers.”

Unlike West Wing staffers, the president is exempted from violations of the Hatch Act, the anti-corruption law prohibiting executive branch employees from engaging in certain partisan political activity (which has given the administration a few problems thus far).

However, Trump is still required to abide by campaign finance laws, which mandate that his presidential campaign reimburse taxpayers for travel pertaining to his re-election.

While campaign finance violations of this nature are difficult to quantify and rarely enforced, the video likely constituted another, lesser known, violation of law. In an interview with the Washington Post, CREW’s chief ethics counsel Virginia Canter revealed that what bothered her the most about Trump’s video was his likely unlawful use of the presidential seal.

Under 18 U.S. Code § 713, it is illegal to employ the presidential seal “for the purpose of conveying, or in a manner reasonably calculated to convey, a false impression of sponsorship or approval by the Government of the United States.”

According to Canter, the purpose of the law is to prevent personal or campaign-related statements from giving “the imprimatur that it’s a statement of the United States,” adding that “it communicates that it’s an official action, when it wasn’t.”

But Trump has shown no signs that he plans to start abiding by the letter of the law. Paul S. Ryan, the vice president of policy and litigation for the watchdog group Common Cause, told the Post that “most presidents have had enough respect for the office to try to separate campaigning from formal duties. Donald Trump is not such a president.”

“Senior administration has repeatedly violated the Hatch Act, so they’ve gotten reprimands from the Office of Special Counsel, but they keep it doing it over and over again,” Ryan remarked. According to Ryan, “the problem is that the president doesn’t care about ethics laws.”