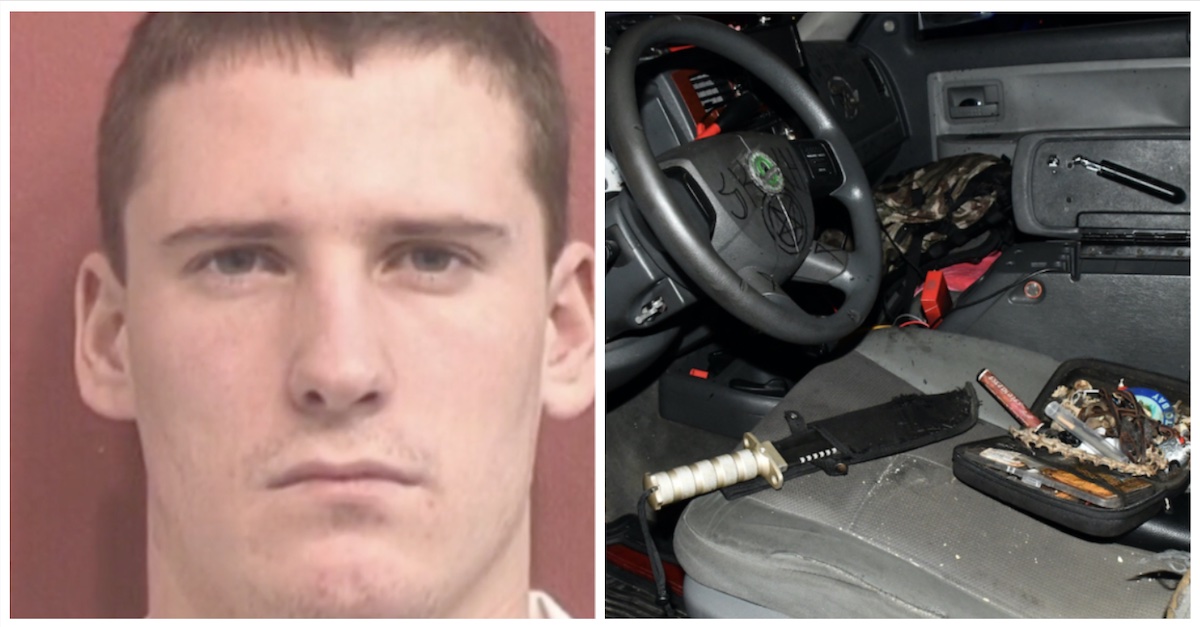 A man recently arrested after authorities allegedly found a machete and bayonet-style knife inside a pickup truck with swastikas scrawled on it outside Democratic National Committee headquarters must stay behind bars, a D.C. judge ruled on Tuesday.

U.S. Capitol police arrested California man Donald Craighead, 44, after finding his Dodge Dakota pickup truck near the DNC building around midnight on Monday. The photographs of his vehicle show it covered with neo-Nazi and white supremacist iconography.

“This is good police work plain and simple,” Chief Tom Manger wrote in a statement on Monday. “We applaud the officers’ keen observation and the teamwork that resulted in this arrest.”

On Tuesday afternoon, D.C. Superior Court Magistrate Judge Lloyd Nolan Jr. granted the government’s request to hold Craighead, after rejecting his defense counsel’s arguments for his release. The judge said that Craighead’s record showed a prior assault charge that involved a weapon about a year ago.

According to an affidavit released Tuesday, Craighead told an officer that he was “on patrol.”

“Why are you all pulling me over when there are brown people hurting white people?” Craighead asked, according to the affidavit.

Asked why he had weapons in his truck, Craighead allegedly replied: “I just like the look of it. It’s not like I’m trained to fucking kill anyone or anything.”

The affidavit records Craighead’s tirade of racist and homophobic invective in detail, showing him flinging an anti-gay slur at the officer questioning him.

“The f****ts with the drones are following me,” Craighead allegedly said, according to the affidavit. 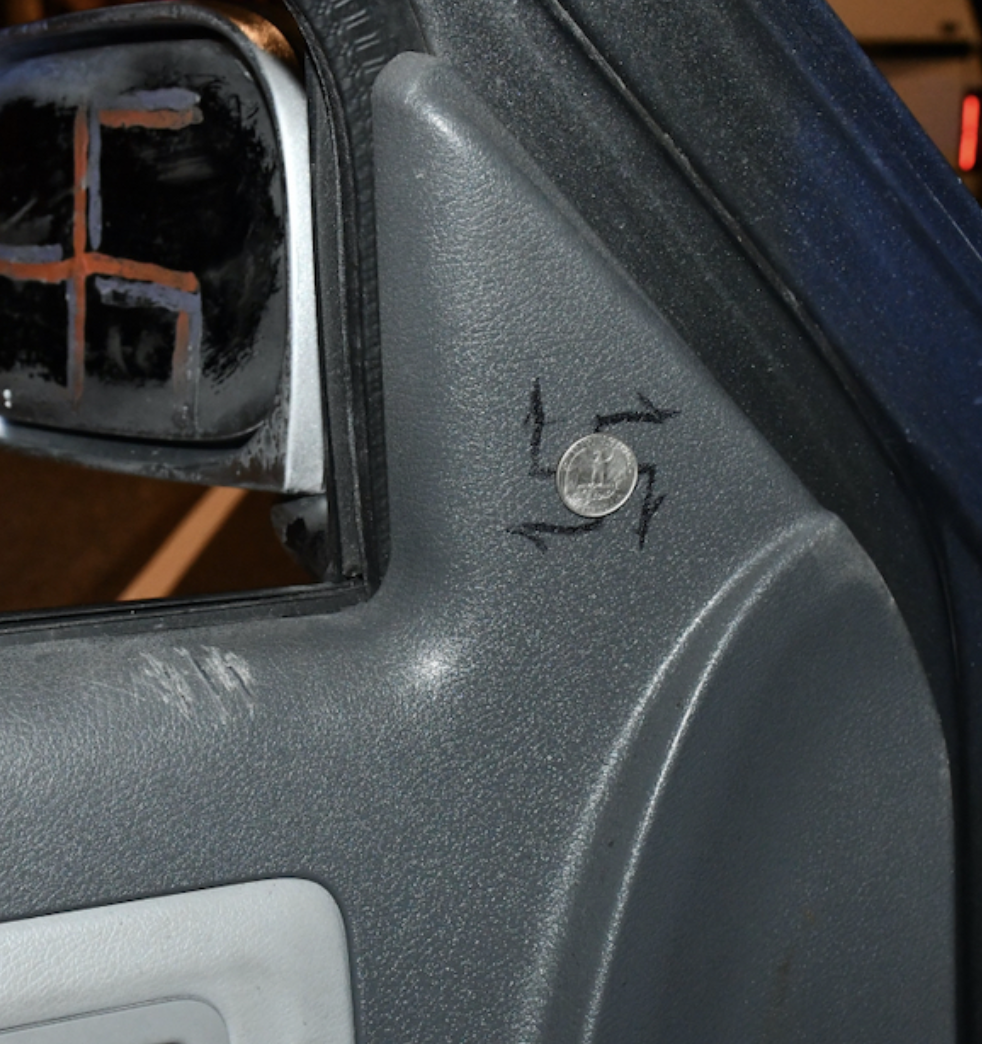 The responding officer recorded the various symbols associated with white supremacy on the truck, including an Odin’s cross, swastikas, and Norse runes. Scrawled in Sharpie on the passenger glove compartment, the officer wrote that he found the message: “Red is Alpha III Death to Others White Power.”

The officer also wrote that Craighead wore a T-shirt associated with the “Boogaloo movement,” a group known to pine for a second U.S. Civil War.

According to the affidavit, Craighead waived his rights and agreed to an interview where he admitted to possessing the weapons for “offensive purposes.”

“Despite [his] beliefs, he claimed no association with any extremist group,” the affidavit states.

In separate document, police recount additional observations from the interview, including details about Craighead’s ideology, appearance, travels and mental state.

“During the interview the defendant appeared to be malnourished with a thinning face as compared to social media photos of the defendant,” the supplemental affidavit states. “He appeared disheveled, with visibly unclean hands and arms, and he emitted body odor consistent with not bathing in several days.”

Craighead allegedly told authorities that he traveled to Washington, D.C., roughly three months ago in May.

“While in DC, the defendant camped outside of Union Station and ultimately left DC because it was too diverse, traveled to Richmond, looking for and expecting it to be a white community,” the document states. “Upon arriving, he realized it was no longer a white community or Valhalla. He then traveled back to DC. At some point he references traveling by train to North Carolina. The defendant also advised that he had been feeding on animals he encountered during his travels.”

“The defendant further stated that he sees and feels magnetic frequencies believes drones are following him, and believes certain numbers are assigned to people,” the supplemental affidavit continues. “The defendant also believes that his assigned number is being used by other people who are being victimized. To block the frequencies, the defendant placed coins, magnets, and metal devices throughout his vehicle. The defendant also explained he insulated the fuse box inside of his truck to reduce the frequency that it was emitting.”

Craighead pleaded not guilty to a felony weapons possession charge through his attorney and has been held without bond.

According to court papers, the defendant already has made plans for after his release.

“After the defendant’s release, he would like to legally register his vehicle in DC to travel to Louisiana where there is a purer white, non-gay community,” the document states. “Upon review of the crime scene photographs of the weapons recovered from the defendant’s vehicle, the item listed as a bayonet is in fact a large hunting knife with a blade approximately 7.5 inches long”

“Ties to Any Previous Cases”?

When first announcing Craighead’s case, Capitol Police emphasized their investigation is ongoing and added that it is unclear whether he “has ties to any previous cases in this area.” Those other cases have been well-publicized, the most high-profile of which relates to the Jan. 6 assault on the U.S. Capitol.

Some eight months after the siege, the FBI’s search continues for the person who planted two improvised explosive devices outside DNC and Republican National Committee headquarters. The bureau recently released new footage to the public.

In a development last week involving a separate incident, Alabama man Lonnie Coffman announced plans to plead guilty in a case accusing him of toting 11 Molotov cocktails and loaded firearms from his home state to a few blocks from the DNC. Authorities claim they found Coffman’s stash of deadly weapons inside the 71-year-old’s red GMC Sierra truck.