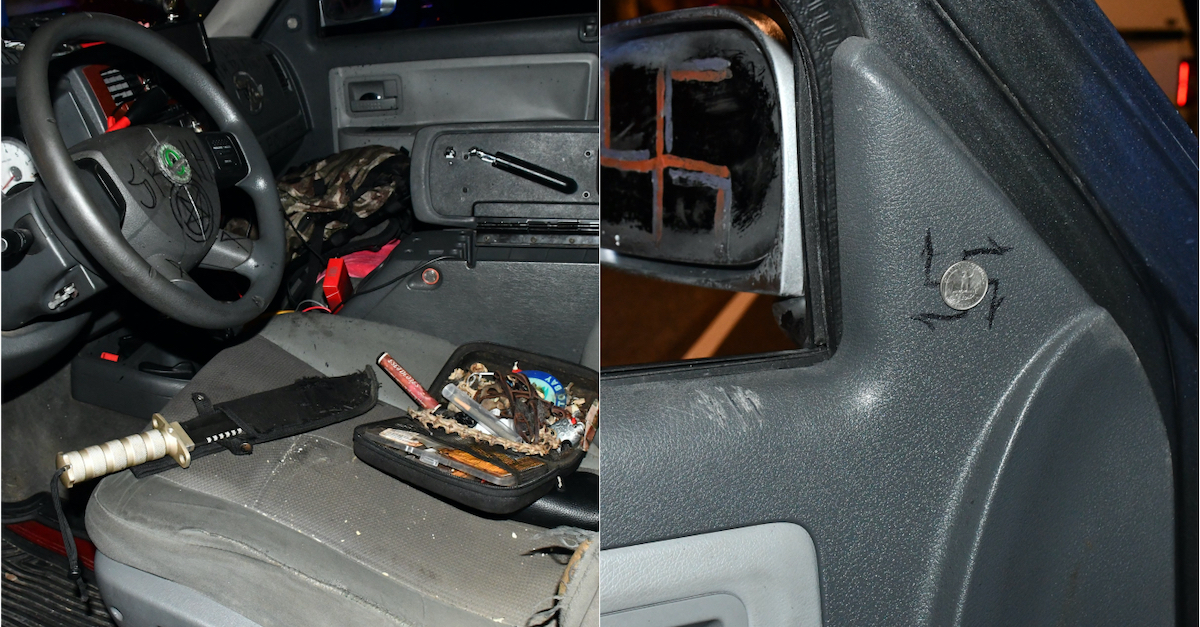 D.C. authorities say that they found a machete and knives inside Donald Craighead’s truck near the Democratic National Committee headquarters.

U.S. Capitol Police arrested a California man on Monday after authorities found a machete and knives near his swastika-strewn truck littered with weapons and white supremacist iconography.

According to police, a Special Operation Division Officer noticed 44-year-old Donald Craighead’s Dodge Dakota pickup truck with a swastika and other neo-Nazi and white supremacist symbols painted on it, outside of Democratic National Committee headquarters around midnight.

Instead of a license plate, the vehicle only had an image of the flag of the United States, which defeated the Nazis alongside other Allied powers during World War II.

A U.S. Capitol Police say an officer pulled over the truck along the 500 block of South Capitol Street, SW and found two weapons banned inside Washington, D.C.: a machete and a bayonet.

“This is good police work plain and simple,” Chief Tom Manger wrote in a statement. “We applaud the officers’ keen observation and the teamwork that resulted in this arrest.”

Craighead claimed to have been “on patrol” in the area, spouted white supremacist rhetoric, and was arrested for possession of dangerous weapons, authorities say.

“This is an excellent example of the work our officers do every day,” Operational Services Bureau Deputy Chief Jason Bell wrote in a statement.

Craighead’s charges do not appear to have been added to the public records database by press time.

Authorities did not immediately respond to Law&Crime’s press inquiries for more information about the case and court records. The U.S. Capitol Police say that their investigation is ongoing and it is unclear whether Craighead “has ties to any previous cases in this area.”

Some eight months after the Jan. 6 assault on the U.S. Capitol, authorities continue to look for the individual who planted two improvised explosive devices outside Democratic National Committee and Republican National Committee headquarters.

Last week, Alabama man Lonnie Coffman announced plans to plead guilty in a case accusing him of toting 11 Molotov cocktails and loaded firearms from his home state to a few blocks from the DNC. Authorities claim they found Coffman’s stash of deadly weapons inside the 71-year-old’s red GMC Sierra truck, after U.S. Capitol Police performed explosive sweeps outside the perimeter of the building on Jan. 6.