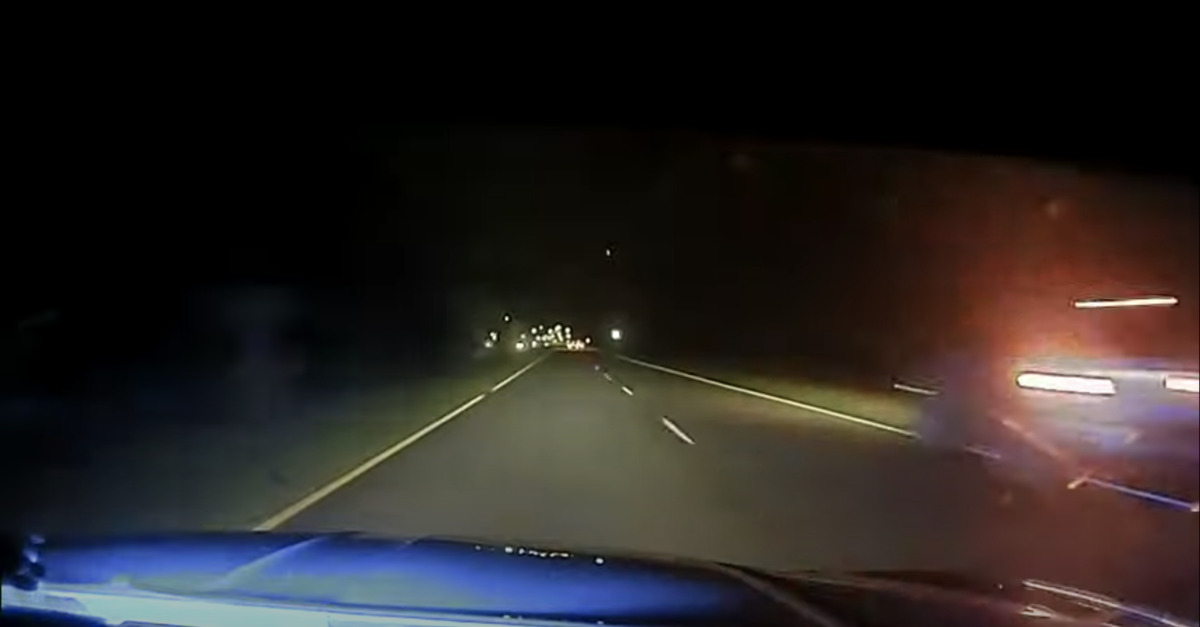 Four children in Georgia have been arrested in connection with the murder of a Florida resident after a high-speed chase last week.

According to the Kingsland Police Department, three of the arrested youths were wanted on murder and home invasion charges stemming from an incident that occurred over Labor Day weekend.

An officer in the Peach State noticed a black Honda traveling south at 96 miles per hour on Interstate 95 just before 11 p.m. on Friday. Efforts to catch the vehicle initially proved unsuccessful, police say, because the car sped up after being tailed by law enforcement and “continued to travel at speeds in excess of 120 mph and did not stop.”

After making an exit off the highway and heading east, the car full of teenagers then made an “abrupt U-turn” and tacked back west, police say, giving KPD officers in the area just enough time to deploy “spike strips on the vehicle which led to the vehicle pulling over.”

After finally stopping the car, police and Camden County Sheriff’s Office deputies “made contact with the individuals inside the vehicle and all were detained,” according to the KPD. Police quickly ascertained that the driver of the black Honda was a 12-year-old boy and that the car was allegedly stolen. As for the passengers, police said they also picked up a 14-year-old boy, a 15-year-old boy and a 15-year-old girl. None of the teenagers’ names have been released.

Three of those alleged joyriders, however, were also wanted in connection with the recent murder of a man nicknamed Hallelujuah who lived in Jacksonville, Fla. The driver was one of those wanted individuals but police did not clarify which of the two passengers were also accused of that home invasion gone violently awry.

According to Jacksonville-based CBS affiliate WJXT, the deceased man’s family members provided home security footage which showed seven boys and one girl entering the house–five of whom were armed with guns. Once inside, the outlet reports, the group of youths began to rob and ransack the house–ultimately stealing food, high-priced sneakers and killing the 28-year-old man in question.

A copy of that surveillance footage was reportedly provided to the Jacksonville Sheriff’s Office but has yet to be released publicly.

“It does appear at least two of the subjects located in the stolen vehicle in Georgia are tied to an active investigation here in Jacksonville,” the JCSO told the outlet in a statement. “Detectives continue to work diligently to identify those that may have played a part in the crime. As such, we are unable to provide additional details into the investigation at this time – to do so would impede further investigative efforts, arrests and/or prosecution.”

Video of Monday evening’s high-speed chase, on the other hand, was quickly made available by law enforcement in the Sunshine State:

Clocking in at just over seven minutes, the dash cam video shows the moment the officer initially responded to the speeding vehicle. What follows is a largely uneventful chase along the roads and highways–interrupted roughly halfway through with the above-mentioned U-turn which is announced by the car’s left turn signal. The chase ends with the car rolling to a stop alongside the shoulder as the squad car pulls in front.

The 12-year-old driver was charged with theft by bringing stolen property into the state, speeding, reckless driving, fleeing from and attempting to elude law enforcement, and being a fugitive from justice. Every other teen inside the car was charged with theft by receiving stolen property and with being a fugitive from justice.

All four minors are currently being held at the Regional Youth Detention Facility in Georgia.