Dan Abrams Spars with Lawyer for First Person Suing Over Alec Baldwin Shooting: ‘The Change Is Going to Occur, It’s Just Not Going to Be Because of You’ 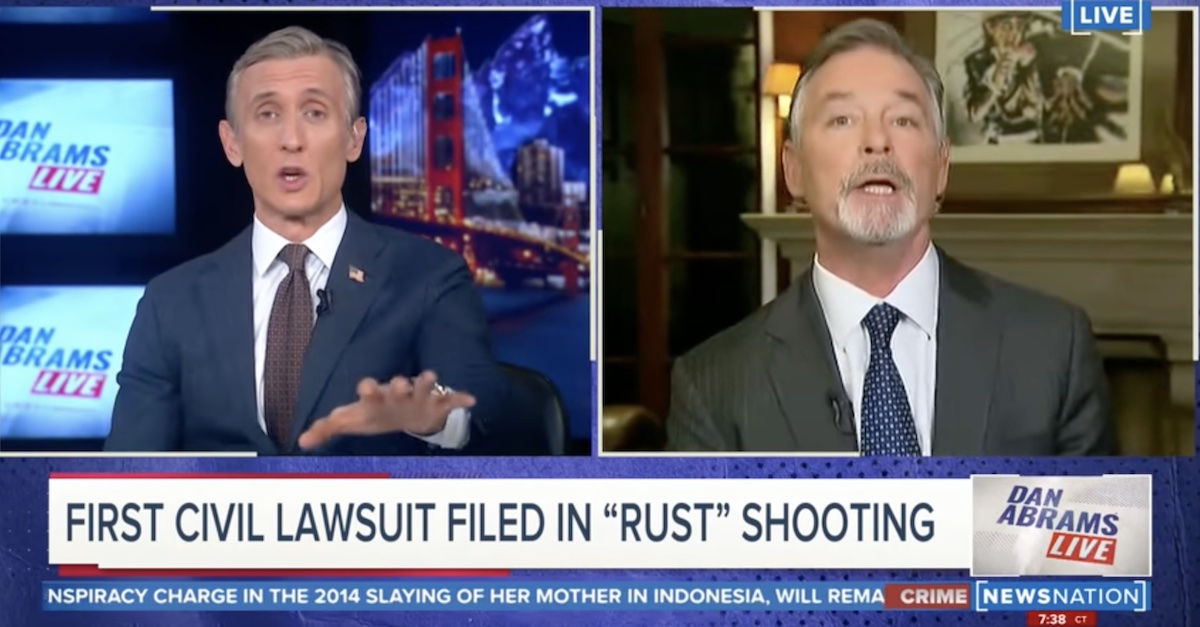 The first lawsuit was recently filed over the shooting incident on the set of the infamous Alec Baldwin western “Rust” that took the life of cinematographer Halyna Hutchins and wounded director Joel Souza.

Law&Crime founder Dan Abrams took issue with the claims made by Serge Svetnoy, the chief lighting technician and electrician, also known as a gaffer in Hollywood nomenclature, during a Wednesday segment on Abrams’ NewsNation television program Dan Abrams Live.

“This lawsuit is not about his desire to make money at all,” the gaffer’s attorney Gary Dordick said at a press conference announcing the litigation–which names several defendants involved with the movie’s production. “This lawsuit is to bring awareness to a problem and to prevent it in the future. This lawsuit is to make these kinds of unsafe conditions that happen too much on movie sets stop now.”

The lawsuit alleges the following:

[Svetnoy] felt a strange and terrifying whoosh of what felt like pressurized air from his right. He felt what he believed was gunpowder and other residual materials from the gun directly strike the right side of his face and scratch the lenses of the eyeglasses he was wearing.

Attorneys for Guiterrez-Reed have suggested the film’s production was somehow sabotaged. Dordick dismissed that defensive claim during the Wednesday press conference as “very far-fetched” and insisted the armorer “failed at her job miserably.”

“I was a little confused,” Abrams began his skeptical assessment of the Svetnoy case. “Because I get that there will be lawsuits. People will be held accountable for the negligence on the set. They should be. But why would you encourage this client to sue when the damage he suffered was basically a scratched eyeglass lens? It seems to me there are many other more valid and worthy plaintiffs than your client.”

Dordick took issue with that description of his and his client’s efforts, and suggested that the introductory remarks by Abrams were incorrect.

“Well, I didn’t encourage him to file a lawsuit,” the gaffer’s attorney argued in response. “He retained my services because he knows that I fight for people like him that have been injured. To say he wasn’t injured isn’t accurate at all. You’re discounting that emotional distress is a real injury and that’s just simply not so.”

Abrams previously said that Svetnoy “wasn’t really injured,” and suggested the real damages of the shooting were suffered by Hutchins and Souza. The host stuck to his guns when addressing Dordick’s defense of his client’s alleged injuries.

“It’s obviously an upsetting thing,” Abrams said in response. “You said at the press conference yesterday that you were doing this to ensure that there’d be more safety on sets around the country–and that very often is the purpose of civil lawsuits, is to prevent things like this from happening again. And yet, I come back to the fact that, it doesn’t seem to me, that this is the plaintiff to do it. Some guy who’s saying that his eyeglass was scratched and he got very upset at everything that happened. That’s not damages. I mean, this just feels–it feels like it’s on the fringe of being a frivolous lawsuit.”

Dordick again disputed Abrams’s assessment of the emotional distress his client has alleged in the 25-page complaint which was filed in a Los Angeles County Superior Court on Tuesday.

“Well, again, you’re taking the position that emotional distress damages are nothing and worthless and that somebody who claims severe emotional distress has no claim–no real injury. You’re focusing on scratched glasses. But, perhaps, focus on: his dear, good friend of many years has a bullet in her. She’s bleeding in his arms. Bleeding on his hands. And he holds her while she lies dying. Talking to her. Trying to keep her alive. Trying to keep her with and save her life where she later died. That damage is compensable in California.”

After going back and forth about the viability of damages, Abrams went on to clarify that he wasn’t attempting to “defend” Baldwin when taking issue with a segment of Svetnoy’s complaint. The suit alleges that the actor should have performed a “double-check” of the weapon that fired the fatal shot.

Dordick then circled back to noting how emotional distress is considered a real damage in the U.S. court system, calling the tort a “very real and very significant injury” before reiterating that he and his client weren’t filing the lawsuit “for the money.”

The change is going to occur, it’s just not going to be because of you.