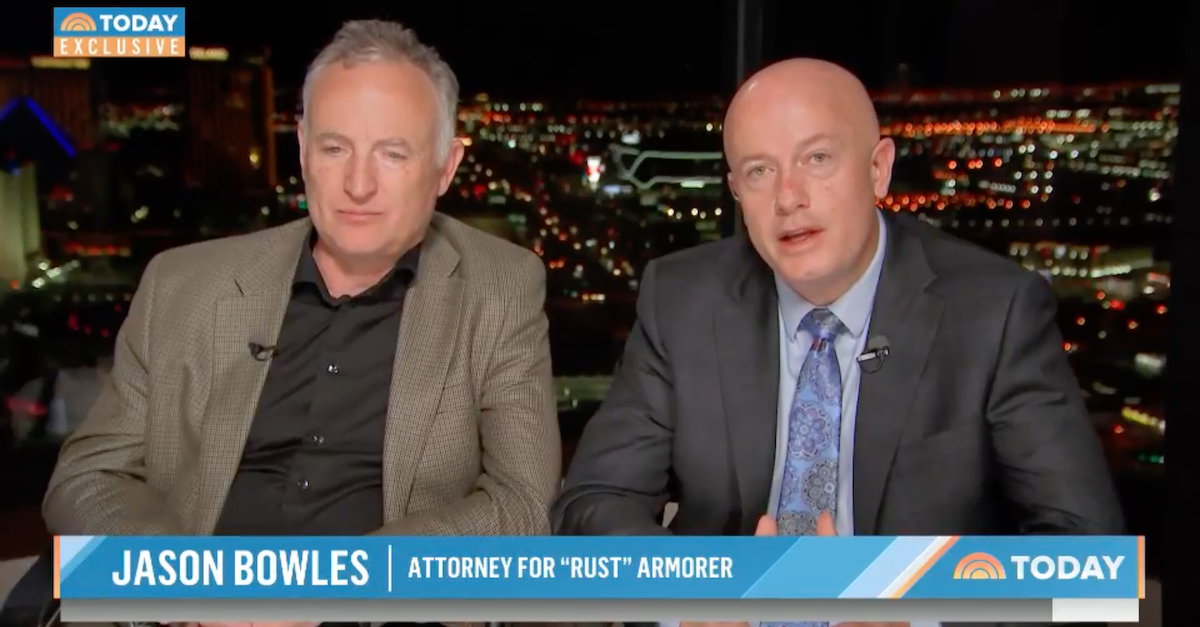 Attorneys for “Rust” armorer Hannah Gutierrez-Reed on Wednesday suggested that an unknown person may have intended to “sabotage” the now-infamous Alec Baldwin film by bringing live ammunition to the film’s Santa Fe, New Mexico set. According to search warrants, Baldwin shot and killed cinematographer Halyna Hutchins and wounded director Joel Souza after assistant director David Halls handed him a weapon that Halls announced was “cold.”

Gutierrez was “absolutely devastated and remains very emotional” about the incident, her attorney Jason Bowles told NBC’s Today show in an appearance alongside co-counsel Robert Gorence. The interview was part of a pair of morning show appearances; Bowles also appeared solo on ABC’s Good Morning America.

Bowles told NBC that they “don’t even know” whether Gutierrez loaded a live round into the gun Baldwin eventually used. The attorney said his client “should have been able to rely on” a box of ammunition labeled to contain only dummy rounds.

Dummy rounds look like real bullets but contain no gunpowder or propellant. They are used on film sets as inert props because they appear more realistic than blanks. Blanks generally contain a crimped end and contain gunpowder or some type of propellant but do not contain a projectile.

“The person who put the live round in the box of dummy rounds had to have the purpose of sabotaging the set,” Bowles said.

Host Savannah Guthrie asked Bowles if that was his “theory of the case.” Bowles said he and his co-counsel had not arrived at a firm “theory” because they were “still investigating.”

“Why would someone do that?” Guthrie asked while asking about the unknown person’s alleged “motive and opportunity” to mix live ammunition into a box of dummy rounds.

Bowles said several “disgruntled” crew members walked off the set the day before and may have been looking to “prove a point.”

“They’re unhappy” after working 12 to 14 hours a day on top of an hour drive back and forth to Albuquerque from the scene near Santa Fe, the attorney said.

“You can’t rule anybody out at this point,” he continued. “We know there was a live round in a box of dummy rounds that shouldn’t have been there. At least one live round. We have people who had left the set — who walked out because they were disgruntled.  We have a time frame of between 11 and 1 approximately that day in which the firearms at times were unattended. So, there was opportunity to tamper with this scene.”

Gorence said the guns were locked in a safe but that the ammunition was “unattended” in a prop truck “at all times” during the production. He said a tray which contained the guns was also unattended as the crew ate lunch the day the shooting occurred.

“She had two roles on that film set,” Bowles said while noting that Gutierrez was both a part-time armorer and a prop assistant.  He said Gutierrez put the guns on a prop cart before the crew broke for lunch. Assistant director Halls took control of the weapons while Guiterrez attended to her other job, the attorney added.

Gorence said Gutierrez “did not” check the guns again after lunch, but he reiterated that what was scheduled to occur in the church was a “tech prep” that involved “positioning cameras” only. (He appeared to tell the story differently on ABC’s Good Morning America.)

“Hannah was not in the church, and that’s really significant,” Gorence said. “If there was something that was going to involve one of the firearms, she had to be there. She wasn’t in the church because it wasn’t set up to have that dynamic of — ‘we’re going to use one of these firearms.'”

Bowles said Gutierrez showed Halls every one of the six rounds in the gun by spinning the revolver’s cylinder before she gave the gun to Halls.

Guthrie then demanded to know the extent of Gutierrez’s competency and fitness to handle the job.

“As the armorer, as she’s spinning it around, shouldn’t she have known with her expertise whether there’s a live round in the chamber?” Guthrie asked.

The attorneys said that many dummy rounds look exactly like real bullets but that some contain holes to mark them as dummies.

They added that Gutierrez was “cooperating with the authorities,” said they anticipated additional police interviews would take place, and hoped fingerprint and DNA analysis from the scene would pinpoint the identity or the existence of any nefarious actors.

Bowles made similar comments on ABC’s Good Morning America. However, during this interview, the attorney claimed Gutierrez did check the gun after lunch:

When Hannah came back from lunch . . . she then showed that firearm to Mr. Halls, the assistant director; she spun the cylinder, showed him each of the rounds in that firearm, and then she gave the firearm to Mr. Halls.  At that point, he had the gun; he went into the church; he said he was going to hold it.  At that point — Hannah — there was no scene going on, there was no rehearsal.  There was tech prep with the cameras.  They were trying to set up — figure out where they were going to be.  So, with nothing going on, Hannah left the church to resume her duties on her prop job.

He reiterated the point later on when pressed about whether Gutierrez “re-checked” the gun.

“She did spin the cylinder; she showed Mr. Halls each of the rounds,” Bowles said. “There were six dummy rounds that she had loaded into that firearm that she believed had been dummy rounds. She did spin it; she did check it.”

Bowles hoped “DNA and fingerprint” evidence being reviewed by the FBI would be helpful. He then returned to the possibility that live ammo had been placed in a box containing dummy rounds while extolling his client’s expertise.

“There was a box labeled dummy rounds that Hannah had been pulling from,” Bowles said. “She knew her dummy rounds. Somebody put that live round or live rounds in that box. When you do that, you can only have bad intentions. Because you’re going to confuse the rounds if you’re the armorer, and they appear very similarly. The dummy rounds look like a regular, live round.”

Host Michael Strahan asked Bowles if the defense believed the round was placed purposefully.

“We are looking at that possibility,” the attorney responded. “We’re afraid that could have been what happened here — that somebody intended to sabotage that set with a live round intentionally placed in a box of dummies.”

“First of all, you wouldn’t bring a live round on the set, but second of all, why do you place that in the box labeled dummies that the armorer is going to be pulling from?” Bowles continued. “Everybody knows they’re going to be getting it from there. Why would you do that other than to try to cause some incident on the set?”

“They wanted to do something to something to cause a safety incident on set; that’s what we believed happened,” the lawyer added. “We know Hannah did not put the live rounds in that box . . . there can be very, very few explanations for why live rounds end up in a box of dummy prop ammunition on a movie set.”

Echoing comments made on the Today show, Bowles said Gutierrez was usually “called back” every time there was a “scene” or a “shot” to reacquaint Baldwin with the gun and its safety features. She was not for this particular incident. The attorney said Gutierrez was “extremely safety conscious,” had trained Baldwin one-on-one with the gun selected for the movie, and told him he should never “point it at a human being.”

He added for ABC News, however, that his client was not the source of any live ammo.

Strahan asked Bowles if Gutierrez was aware of reports that claimed some of the film’s staffers were using prop guns for live target practice.

“She never saw anything like that,” Bowles said. “She doesn’t believe that happened. I don’t know who’s saying that.”

Bowles said Gutierrez, prop master Sarah Zachary, and another assistant possessed the combination for the safe where the guns were kept when not in use. However, the ammunition — which was believed to have been dummy rounds and blanks only — was not locked up.

“It was capable of being tampered with,” Bowles said of the ammo.

Bowles said Gutierrez was taught by her father, famous Hollywood film armorer Thell Reed, “literally from the age of ten” about gun safety and how to work on film sets. On “Rust,” however, Bowles said an “emphasis on profitability” on the film set was partly to blame for what occurred.

“She knows firearms, she knows safety, she knows the principles . . . this is not about her being inexperienced,” the attorney said.  “It’s about a production set where they didn’t give the resources” to get the job done safely.

[image via screengrab from Today/NBC]