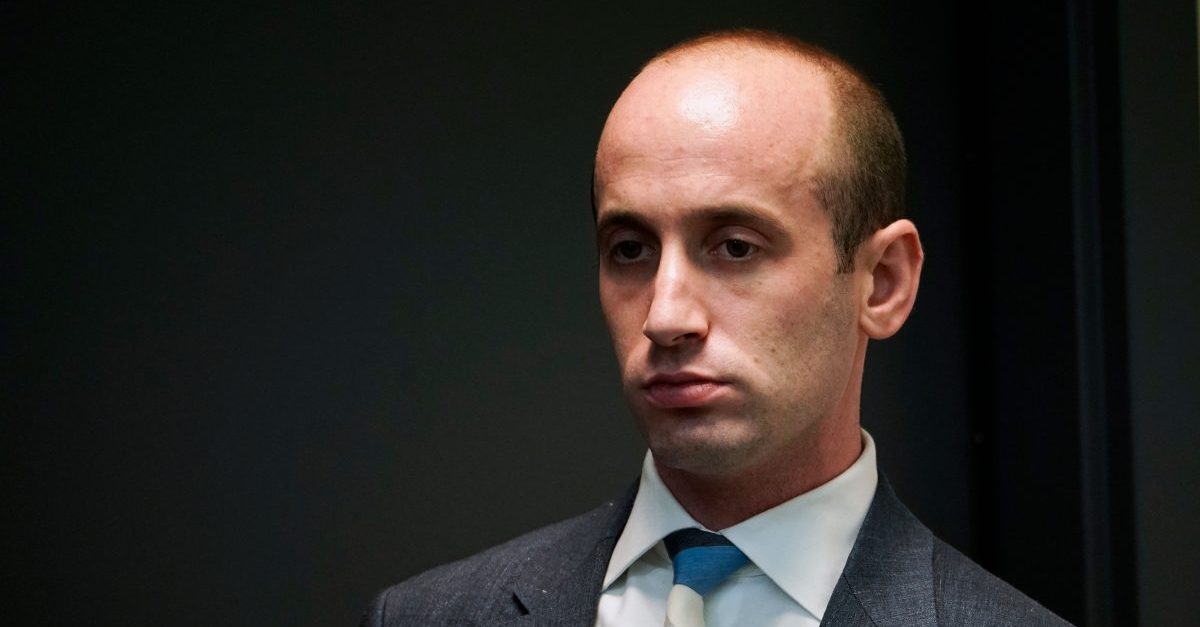 Operating under the umbrella of The Leadership Conference on Civil and Human Rights, a coalition which itself includes some 220 other national organizations, the groups “write to demand the removal of Stephen Miller from his position as your senior advisor.”

Supporters of white supremacists and neo-Nazis should not be allowed to serve at any level of government, let alone in the White House. Stephen Miller has stoked bigotry, hate, and division with his extreme political rhetoric and policies throughout his career. The recent exposure of his deep-seated racism provides further proof that he is unfit to serve and should immediately leave his post.

“In his role as your senior advisor, Stephen Miller has promoted hate speech spewed from neo-Nazis, bigots, and white supremacists,” the letter continues. “His advancement of white nationalist ideology has resulted in policies—and violent acts—that actively harm immigrants, people of color, and marginalized communities.”

As Law&Crime previously reported, a huge tranche of emails between Miller and former white supremacist Breitbart editor Katie McHugh revealed that Miller promoted white nationalist tropes and media outlets in order to bolster his anti-immigrant agenda while he worked for then-senator Jeff Sessions in 2015 and 2016.

In those emails, Miller appears to endorse the so-called “white genocide” theory, laments non-white immigration into the United States and even approvingly cites the same eugenics laws once lauded by Adolf Hitler in “Mein Kampf.”

“Stephen Miller, Trump’s architect of mass human rights abuses at the border (including child separation [and] detention camps [with] child fatalities) has been exposed as a bonafide [sic] white nationalist,” Ocasio-Cortez tweeted, “He’s still at the White House shaping US immigration policy. Miller must resign. Now.”

Calls for Miller’s ouster have been made semi-consistently since it was revealed he was the architect of the Trump administration’s family separation policy on the U.S.-Mexico border. In fact, one of the first voices arguing for Trump to fire Miller was a then-member of congress from the president’s own party, Mike Coffman.

“The President should put a General, a respected retired CEO or some other senior leadership figure on the job of making sure each and every child is returned to their parents,” Coffman tweeted on June 21, 2018. “And the President should fire Stephen Miller now. This is a human rights mess. It is on the President to clean it up and fire the people responsible for making it.”

Just days after that, legal expert and immigration attorney David Leopold incensed CNN’s Kate Bolduan for describing Miller as a white nationalist on the air.

Leopold nonchalantly replied to the emotional CNN host: “It’s not an uncivil thing. I would argue that it’s a fact, but okay.”

Omar previously caused a minor controversy in April of this year when she referred to Miller as a white nationalist.

“Stephen Miller is a white nationalist,” she tweeted. “The fact that he still has influence on policy and political appointments is an outrage.”

That categorization again caused some heartburn and consternation for CNN as host Brianna Keilar wondered out loud whether Omar’s remarks made immigration “discussions more difficult.”

Omar has since run a victory lap–noting that she was correct about Miller’s racial proclivities all along.

“As I said earlier this year: Stephen Miller is a white nationalist,” she tweeted. “And now we have the emails to prove it. This type of racism and hatred has no place in our government. Miller needs to step down. Now.”

The civil rights groups linked Miller’s rhetoric and promotion of white nationalism to a documented increase in hate crime-related violence.

“The heightened anti-immigrant and anti-minority sentiments driving the policies of this administration are undoubtedly linked to the alarming rise of hate crimes and the highest number of hate-fueled murders in recent history,” the open letter reads. “Stephen Miller’s racist, deadly agenda is contributing to this violence and must be stopped.”

“Stephen Miller represents white supremacy, violent extremism, and hate —all ideologies that are antithetical to the fundamental values that guide our democracy. Allowing him to remain a White House advisor is a betrayal of our national ideals of justice, inclusion, and fairness. We call on you to halt yourown hateful actions and rhetoric and remove all hate enthusiasts from the administration.”