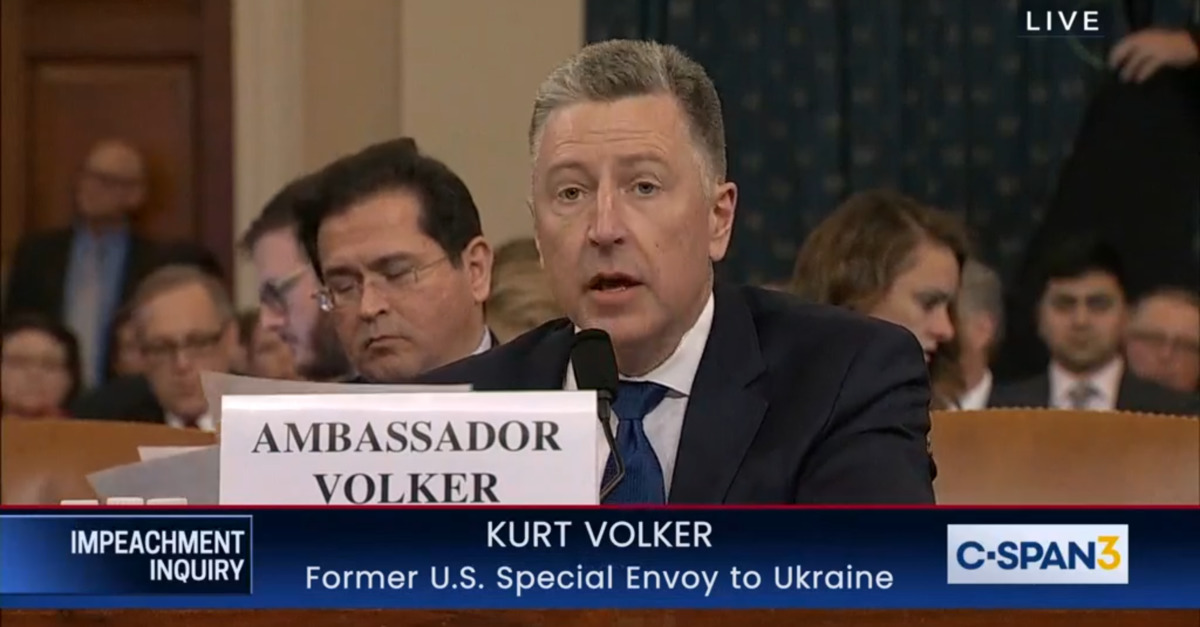 Former U.S. Special Envoy to Ukraine Kurt Volker, an impeachment witness congressional Republicans wanted to testify, flipped the script Tuesday on his previous testimony, in what’s being viewed as a massive blow to the defense mounted by President Donald Trump, Rudy Giuliani and their allies.

At issue is Volker’s previous deposition testimony in which he disputed that U.S. aid to the former Soviet satellite hinged upon Ukrainian officials announcing an investigation into alleged corruption implicating former vice president Joe Biden and his son, Hunter Biden‘s work on the board of resource extraction company, Burisma Holdings.

Volker previously testified to his ignorance of the alleged quid pro quo or alleged bribery scheme in his deposition testimony before the House Permanent Select Committee on Intelligence on October 3.

“Now, Ambassador Volker, given the pressure that Rudy Giuliani was putting on the Ukrainian administration to initiate these investigations, do you not think that the Ukrainians would not have understood that the actual explanation for the security assistance being held up was the fact that they did not issue that statement, or they had not initiated those investigations if there was no official explanation?” lead Democratic Party investigator and former federal prosecutor Daniel Goldman asked.

Volker disagreed that U.S. military aid to the Ukraine was conditioned on the official announcement of a Biden-Burisma investigation.

[Trump’s] views on Ukraine were so sharply negative, and reinforced in a negative understanding, that it makes more sense to me, it’s more direct that this is happening independently; that he sees that we are about to launch a notification of millions of dollars to Ukraine. “Wait a second. You know, are they can we work with these guys? Are they corrupt still? Why should we be giving them American money? Why aren’t the Germans doing this?”

Volker drastically amended the above testimony in his opening statement before the House Intelligence Committee:

Since I gave my testimony on October 3, a great deal of additional information and perspectives have come to light. I’ve learned many things I did not know at the time of the events in question. First, at the time I was connecting Mr. Yarmuk and Mr. Giuliani–and discussing with Mr. Yarmuk and Ambassador [Gordon] Sondland a possible statement that could be made by the Ukrainian president, I did not know of any linkage between the hold on security assistance and Ukraine pursuing investigations–no one had ever said that to me and I never conveyed such a linkage to the Ukrainians.

“I opposed the hold on U.S. security assistance as soon as I learned about it on July 18th and thought we could turn it around before the Ukrainians ever knew or became alarmed about it,” Volker continued. “I did not know the reason for the hold but I viewed it as a U.S. policy program that we needed to fix internally and I was confident that we could do so.”

Volker added that he told the Ukrainians they didn’t need to do anything in order to have the hold released because he was, at the time, unaware of Giuliani’s shadow diplomatic efforts which conditioned the release of funds on the announcement of the investigations.

“When I spoke to the Ukrainians about the hold,” Volker continued, “I told them the opposite–that they should not be alarmed; that it was an internal U.S. problem and we were working to get it fixed. I did not know others were conveying a different message to them around the same time.”

The former ambassador also said he was unaware of then-national security advisor John Bolton‘s strong disapproval of the conditions surrounding the hold on that military insistence.

Additionally, Volker said he was initially unaware of and later dismissed the “conspiracy theory” regarding Biden and his son.

“I did not understand that others believed that any investigation of the Ukrainian company, Burisma–which had a history of accusations of corruption–was tantamount to investigating vice president Biden,” he said. “I drew a sharp distinction between the two.”

“I think the allegations against Biden are self-serving and not credible,” Volker said later on.

Volker’s testimony was requested by the Republicans and so far he has:

— Admitted Trump used U.S. aid as leverage to pressure Ukraine to investigate Biden, walking back earlier testimony
— Ripped claims about Biden corruption as not “at all credible”

This was deemed “deeply damaging” by legal observers.

Volker testimony deeply damaging to Trump, not just because he is a Republican-called witness who blew apart Trump story about Biden &corruption

“Volker joins Sondland in the ‘now that the truth is out I probably should note that I previously lied to you’ camp.”

Volker joins Sondland in the "now that the truth is out I probably should note that I previously lied to you" camp https://t.co/jZjJZ6wfF5

➡️Allegations against Vice President Biden are not credible.

➡️He now recognizes that the investigations sought by the president were not because of legitimate concerns about corruption, but were for political purposes. pic.twitter.com/tMNMV9GXmB